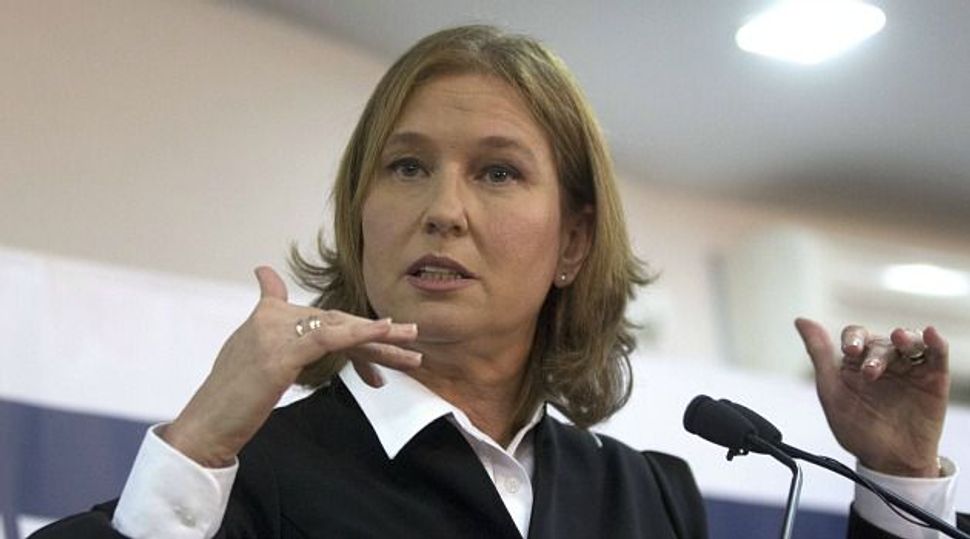 Former Foreign Minister Tzipi Livni announced her candidacy on Tuesday in a January general election, pledging to “fight for peace” with the Palestinians as a centrist alternative to Israel’s right-wing leadership.

Livni, voted out as the head of the main opposition Kadima party in an internal ballot in March, told a news conference she had formed a new party, “Hat’nua” (The Movement).

Livni, a 54-year-old corporate lawyer, was once touted as Israel’s next Golda Meir – the only woman who ever served as prime minister. As foreign minister from 2006 to 2009, during Ehud Olmert’s premiership, she was appointed to the high-profile task of heading peace talks with the Palestinians.

But the negotiations failed, Olmert was forced to step down in a corruption scandal, and while Kadima won more votes than Likud in the ensuing 2009 parliamentary election, Netanyahu outmanoeuvred Livni to form a broad coalition government.

Her return to frontline politics will further fracture Israel’s centre-left, with a slew of parties courting the same pool of voters and rejecting suggestions that they should merge to form a stronger, more unified front against Netanyahu.

Livni has long criticised the stalemate in peace efforts that collapsed in 2010 after Netanyahu rebuffed Palestinian demands to extend a 10-month partial freeze in settlement construction in the occupied West Bank.

At the news conference, she said Netanyahu had negotiated indirectly with Hamas Islamists to achieve a truce in the Gaza Strip last week while failing to pursue a resumption of talks with Western-backed Palestinian President Mahmoud Abbas.

Netanyahu and the United States, the dominant sponsor of the Middle East peace process, have called repeatedly for Abbas to return to negotiations without preconditions.

Abbas has opted instead to seek an upgrade in the Palestinians’ U.N. status to “observer state”. The 193-member world body is expected to back the move in a vote on Thursday, implicitly recognising Palestinian statehood.

In what could be a boost for Livni, as she seeks middle-of-the-road backing, Netanyahu’s party veered sharply to the right on Monday, selecting hardliners to top its candidates’ list in the Jan. 22 ballot.

“Israeli citizens deserve more,” Livni said, taking a swipe at Likud, which tossed aside four moderate members of Netanyahu’s cabinet supportive of diplomacy with the Palestinians.

“Netanyahu lost yesterday in the Likud and he can lose in the election,” Livni said.

Since quitting Kadima and giving up her parliamentary seat eight months ago, Livni joined a leading Tel Aviv think tank. She said supporters had urged her to return to politics and that her decision “wasn’t an easy one to make”.