France Will Back Palestinian Statehood Bid 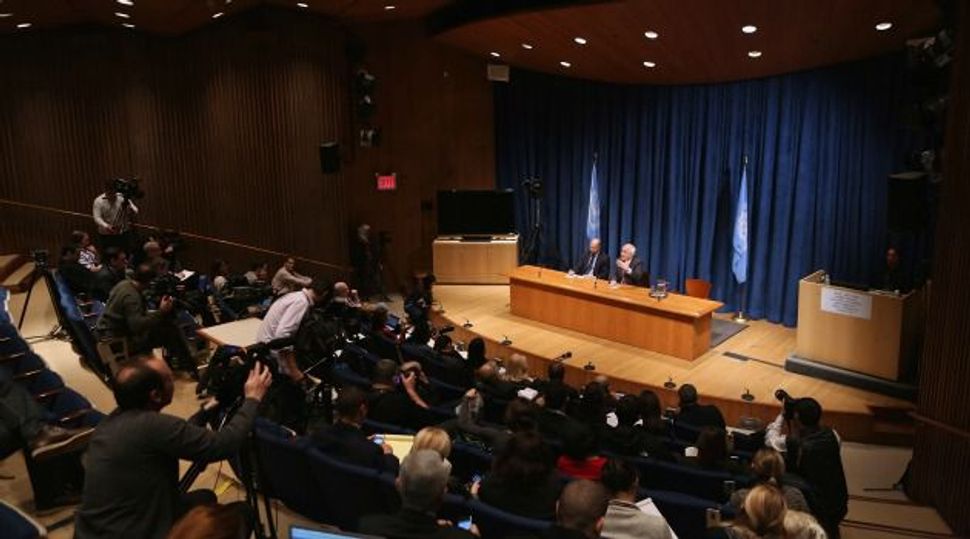 France said on Tuesday it would vote in favour of Palestinian non-member status at the United Nations, an important boost in Palestinian efforts to secure greater international recognition.

The Palestinians have lobbied for support from European countries for their bid at watered-down statehood at the U.N. set for two days time. While Israel has lobbied against them, the Palestinians are set for a sure victory in the 193-member world body made up mostly of developing countries long sympathetic to their cause.

“This Thursday or Friday, when the question is asked, France will vote yes,” French Foreign Minister Laurent Fabius announced in the French National Assembly, the lower house of parliament.

“It is only with negotiations between the two sides that we demand immediately without any preconditions that a Palestinian state can become a reality,” he said.

Palestinian officials keen on solidifying as much European favour as they can in the hours before the vote have indicated they will not immediately seek to accede to the International Criminal Court (ICC), addressing a last international concern.

Israeli, British and U.S. diplomats, apparently realising that they can no longer sway the Palestinians’ in their whole bid, are now seeking guarantees that Palestinians would forego filing complaints against Israel in the court.

Palestinian officials have refused. But, appearing to balance their tone, say the timing and strategy of their eventual ICC accession is a matter for later internal discussion.

“It is our right, and we will not abandon it. We will decide on the proper timing, given our priorities and best interests,” said Hanan Ashrawi, a leading voice of the Palestine Liberation Organisation.

“It’s not for any country to get the Palestinians to relinquish their rights. And if Israel is innocent, it has nothing to fear from the court,” she told Reuters.

Britain, which in recent weeks had pushed European countries to abstain on the statehood vote, has requested that Palestinians foreswear applying to the ICC in return for changing the British vote to a “yes”.

The ICC is not an official organ of the United Nations, but generally accepts applications from its members.

Israel has at times cancelled visits by officials to Britain out of fear of war crimes litigation there. It is concerned that future Palestinian claims at the court could focus on its leaders and undermine its standing abroad.

One envoy from a European country as yet undecided how it will vote said Palestinian hints were “unlikely to be sufficient” to win broad European backing.

“A vague promise not to go to the ICC won’t cut it,” he said.

Israel and the United States condemn the U.N. bid, saying the only genuine route to statehood for the Palestinians is via a peace agreement made in direct talks with Israel.

Peace talks however have been stalled for two years over the issue of Israeli settlements in the West Bank, which have expanded despite being deemed illegal by most of the world.

Israel and the United States have mooted withholding aid and tax revenue that the Palestinian government in the West Bank needs to survive. Hardline Israeli Foreign Minister Avigdor Lieberman has also viewed options that include bringing down Palestinian President Mahmoud Abbas.

Abbas says he is ready for an unconditional resumption of peace talks with Israel following a successful bid.

On Tuesday, a senior Israeli official told reporters that Israel would act cautiously, just as Palestinian negotiators said the number of countries indicating their decisions to vote “yes” was on the rise.

France has indicated its support, while Palestinian envoys say Ireland, Malta, Portugal and Luxembourg have conveyed their intention to vote “Yes”, leaving Germany and the Czech Republic among the few possible “No” votes.

European countries were split in voting for a successful Palestinian bid to join the U.N. cultural agency UNESCO in October 2011. They appear to be leaning more closely toward supporting the Palestinian statehood bid in recent days.

“We support Palestinians’ right to self determination, without prejudicing good relations between Israel and the Palestinians and talks to ultimately solve the conflict,” a European diplomat whose country supports the bid told Reuters.

“European countries have made an investment, politically and economically, in a two-state solution with Israel and Palestine living in security with each other. We have an interest in moving that vision forward,” the diplomat said.

“If you add up the political calculations, nobody’s willing to cut off their money and undermine Abu Mazen (Abbas) or his government,” said Ramallah-based political commentator and former government spokesperson Diana Buttu.

France Will Back Palestinian Statehood Bid