Chef Has Solution to ‘Frankenfish’ Woes 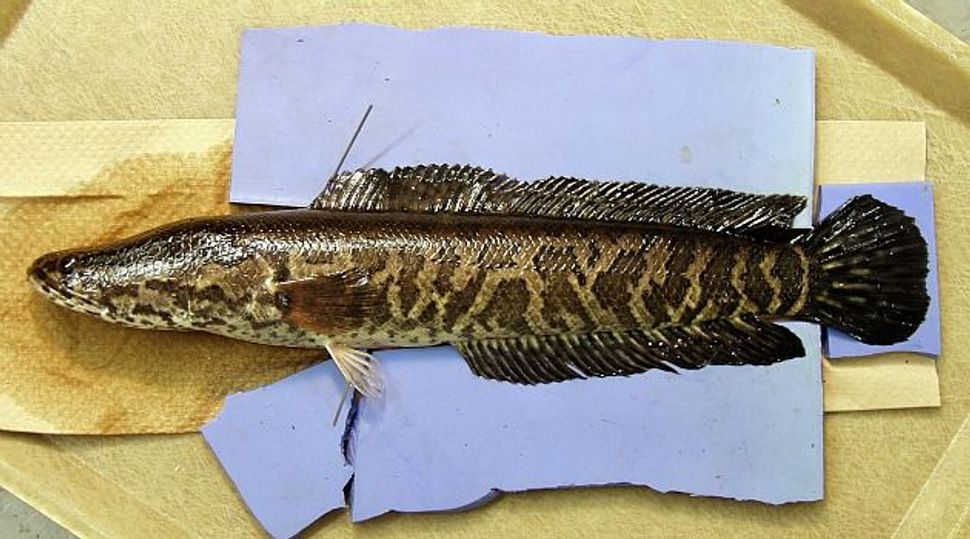 The northern snakehead is known as “Frankenfish” and “rattlesnakes with fins,” and some chefs say one way to stop the predatory, fast-spreading fish is obvious – with a fork.

With a reputation as fearsome as its name, the voracious snakehead fish has intruded throughout much of the Potomac River basin in Virginia and Maryland in the last decade, snapping up anything that gets in front of it.

Putting the torpedo-shaped snakehead on the menu is Washington-area restaurants’ way of helping to control the Asian newcomer. Chefs said they have a key weapon on their side – humans’ zest for eating up other species to the vanishing point.

“When man turns its attention to an animal, it’s very difficult for the animal. He (the snakehead) is dangerous, but chefs are more dangerous,” said David Stein, executive chef at Tony & Joe’s Seafood Place in Washington.

He praised the snakehead for its dense, meaty, white flesh with a mild taste that is ideal for anything from grilling to sauteing. But given the name, snakehead ceviche might be going too far.

“The guy that orders that gets it for free,” Stein said.

The northern snakehead, or Channa argus, has joined a tankful of invasive fish that U.S. authorities are urging people to control by eating them.

Lionfish in the Caribbean, Asian carp in the Mississippi River basin and blue catfish in Virginia rivers are among other newcomers that environmentalists want to see on a dinner plate.

But the snakehead stands out among its invasive peers because its slab-like flesh and its minimal shrinkage is seemingly ideal for white-tablecloth restaurants.

Some four restaurants in the Baltimore and Washington area serve it regularly, according to the Maryland Department of Natural Resources.

At Tony & Joe’s, snakehead appetizers cost $10 to $11, and entrees about $26. Maryland is the only state with a commercial market and the limited supply is keeping prices high.

“They’re really amazing. Probably if it was called any other name than snakehead, people would be more willing to give them a try,” Stein said, admiring a 7-pound (3-kg) fish that had been killed by bow and arrow.

Snakeheads are hardy, fast-growing, voracious and prolific. They got their start in the Potomac through releases from aquariums and the live fish trade, and have turned up in such places as California and Florida. The name comes from its coarse scales, boa constrictor-like coloring and a reptilian snout with a mouth featuring dog-like teeth.

The fish are air breathers that can last for days out of water. Even when gutted and with their throats cut, they gape for breath, said John Rorapaugh, director of sustainability and sales at ProFish, a Washington wholesaler.

“Once they get to mature size, they are on top of the food chain and are ravenous,” he said.

Mice, birds, frogs, other fish, and even AA batteries have turned up inside snakeheads, Rorapaugh said. The fish weigh from about 8 to 15 pounds when mature.

He said he pays about $5 a pound ($12.50 a kg) for snakehead, and has shipped some outside the Washington area, including to New York’s upscale Gramercy Tavern.

Josh Newhard, an expert on the snakehead with the U.S. Fish and Wildlife Service, said it was too early to say what the snakehead’s long-term impact would be on its invaded environment.

Native species have shown no sign of decrease despite the fish’s “remarkable” spread, he said.

“The potential is really high for them to impact other fish species. The fact that people want to remove them from the system is really good,” he said.

Chef Has Solution to ‘Frankenfish’ Woes