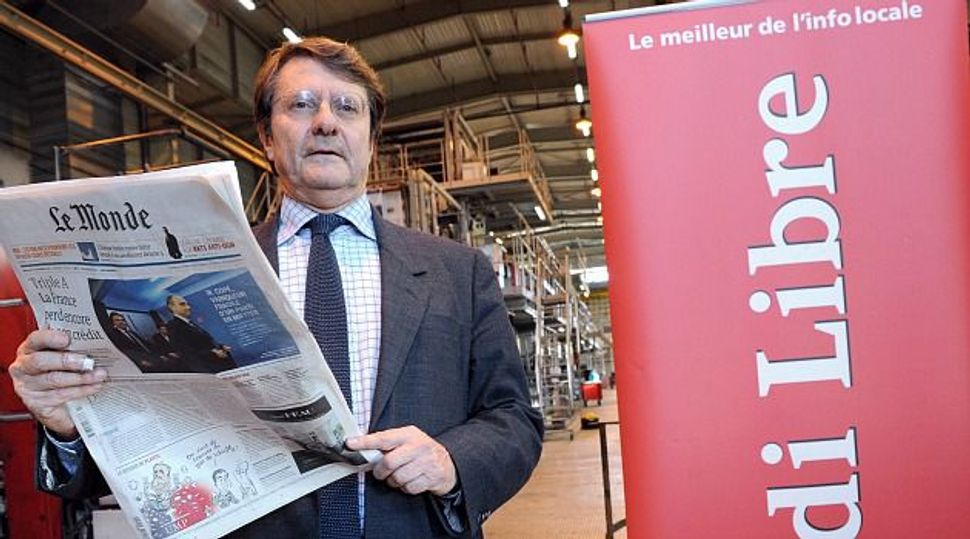 Erik Izraelewicz, editor of France?s Le Monde, has died of a heart attack at 58. Image by getty images

Erik Izraelewicz, the editorial director of the French daily newspaper Le Monde, collapsed and died in his Paris office from a sudden heart attack. He was 58.

Izraelewicz was found unconscious Tuesday at his office.

An author and veteran journalist, he was born to a Polish-Jewish family, according to the daily Dernieres Nouvelles d’Alsace. He began his stint as editorial director two years ago. Le Monde, which may be France’s most influential daily, has not named a successor.

Richard Prasquier, the president of CRIF, the umbrella organization representing French Jewry, had a working lunch with Izraelewicz hours before his death.

“Erik Izraelewicz was, I think, a man of dialogue and balance,” Prasquier wrote in a statement. “Shocked by his sudden departure, I would like to express my appreciation and offer condolences to his family, friends and colleagues.”

French President Francois Hollande described Izraelewicz in a statement as a “renowned economist, a distinguished professional and a man as demanding as generous.”

Izraelewicz had written several books, including two volumes about the rising economic power of China.

In its obituary, Le Monde described Izraelewicz as having been from a pragmatic generation of French socialists “eager for reforms that shape the world as it is, for better or worse.”

Before joining Les Echos and La Tribune, Izraelewicz had worked as a journalist at Le Monde, where one of his postings was in New York.