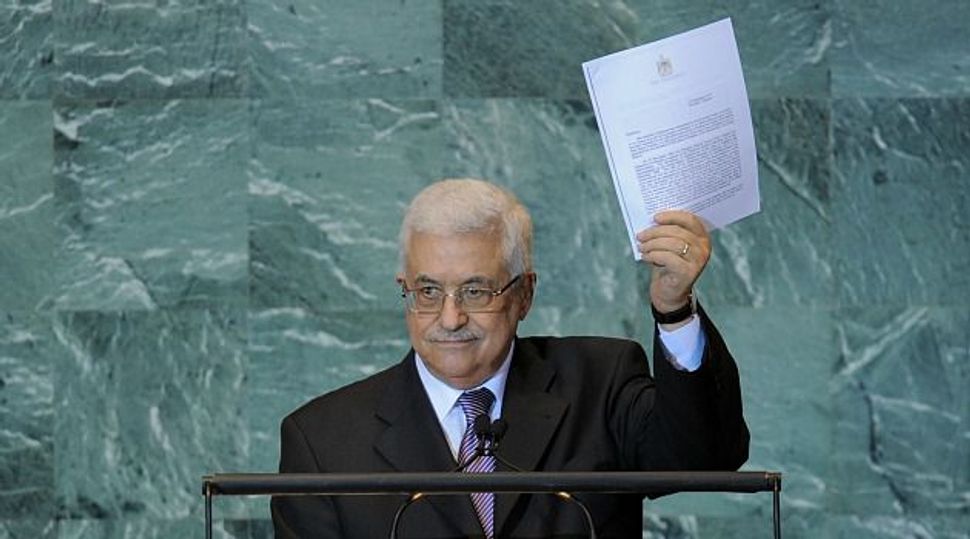 The U.N. General Assembly is set to implicitly recognize a sovereign state of Palestine on Thursday despite threats by the United States and Israel to punish the Palestinian Authority by withholding much-needed funds for the West Bank government.

A Palestinian resolution that would change the Palestinian Authority’s U.N. observer status from “entity” to “non-member state,” like the Vatican, is expected to pass easily in the 193-nation U.N. General Assembly.

Israel, the United States and a handful of other members are planning to vote against what they see as a largely symbolic and counterproductive move by the Palestinians.

Palestinian President Mahmoud Abbas has been leading the campaign to win support for the resolution, and over a dozen European governments have offered him their support after an eight-day conflict this month between Israel and Islamists in the Gaza Strip, who are pledged to Israel’s destruction and oppose his efforts toward a negotiated peace.

The U.S. State Department said on Wednesday that Deputy Secretary of State Bill Burns and U.S. Middle East peace envoy David Hale traveled to New York on Wednesday in a last-ditch effort to get Abbas to reconsider.

The Palestinians gave no sign they were turning back.

Secretary of State Hillary Clinton repeated to reporters in Washington on Wednesday the U.S. view that the Palestinian move was misguided and efforts should focus instead on reviving the stalled Middle East peace process.

“The path to a two-state solution that fulfills the aspirations of the Palestinian people is through Jerusalem and Ramallah, not New York,” she said. “The only way to get a lasting solution is to commence direct negotiations.”

State Department spokeswoman Victoria Nuland reiterated U.S. warnings that the move could lead to a reduction of U.S. economic support for the Palestinians. The Israelis have also warned they might take significant deductions out of monthly transfers of duties that Israel collects on the Palestinians’ behalf.

‘SLAP IN THE FACE’

Granting Palestinians the title of “non-member observer state” falls short of full U.N. membership – something the Palestinians failed to achieve last year. But it would allow them access to the International Criminal Court and some other international bodies, should they choose to join them.

Hanan Ashrawi, a top Palestinian Liberation Organization official, told a news conference in Ramallah that “the Palestinians can’t be blackmailed all the time with money.”

“If Israel wants to destabilize the whole region, it can,” she said. “We are talking to the Arab world about their support, if Israel responds with financial measures, and the EU has indicated they will not stop their support to us.”

Peace talks have been stalled for two years, mainly over the issue of Israeli settlements in the West Bank, which have expanded despite being deemed illegal by most of the world.

In their draft resolution, the Palestinians have pledged to relaunch the peace process immediately following the U.N. vote.

As there is little doubt about how the United States will vote when the Palestinian resolution to upgrade its U.N. status is put to a vote sometime after 3 p.m. (2000 GMT) on Thursday, the Palestinian Authority has been concentrating its efforts on lobbying wealthy European states, diplomats say.

With strong support from the developing world that makes up the majority of U.N. members, the Palestinian resolution is virtually assured of securing more than the requisite simple majority. Palestinian officials hope for over 130 yes votes.

Abbas has been trying to amass as many European votes in favor as possible.

As of Wednesday afternoon, Austria, Denmark, Norway, Finland, France, Greece, Iceland, Ireland, Luxembourg, Malta, Portugal, Spain and Switzerland had all pledged to support the Palestinian resolution. Britain said it was prepared to vote yes, but only if the Palestinians fulfilled certain conditions.

Diplomats said the Czech Republic was expected to vote against the move, although other Europeans might join it. Germany said it could not support the Palestinian resolution, but left open the question of whether it would abstain, like Estonia and Lithuania, or vote no with the Czechs.

Ashrawi said the positive responses from European states were encouraging and sent a message of hope to all Palestinians.

“This constitutes a historical turning point and opportunity for the world to rectify a grave historical injustice that the Palestinians have undergone since the creation of the state of Israel in 1948,” she said.

A strong backing from European nations could make it awkward for Israel to implement harsh retaliatory measures. Diplomats say Israel wants to avoid antagonizing Europe. But Israel’s reaction might not be so measured if the Palestinians seek ICC action against Israel on charges of war crimes, crimes against humanity or other crimes the court would have jurisdiction over.

Hamas militants, who control Gaza and have had icy relations with the Palestinian Authority in the West Bank, unexpectedly offered Abbas their support earlier this week.

“It’s not the best way to convince Mr. Obama to have a more positive approach toward the peace process,” a Western diplomat planning to vote for the Palestinian resolution said. “Three weeks after his election, it’s basically a slap in the face.”