Palestinians Dance in Streets After Vote 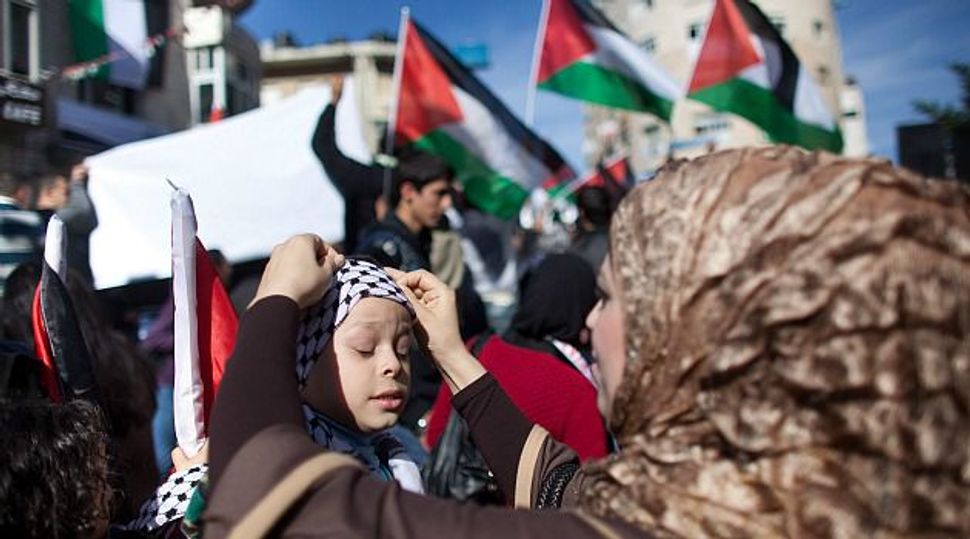 Ramallah Rally: Palestinians cheer the expected approval of the push for statehood at the United Nations.

Thousands of flag-waving Palestinians set off fireworks and danced in the streets on Thursday to celebrate a United Nations General Assembly vote granting de facto recognition of a sovereign Palestinian state.

In Bethlehem, the bells of the Church of the Nativity peeled in honour of the vote, and thousands of people crowded around to watch a live broadcast of President Mahmoud Abbas’s speech in New York projected on the concrete of Israel’s separation wall.

“I feel we are living a historic day, the birth of the state of Palestine,” said Suha Awadallah, wearing a black and white keffiyeh, in Ramallah, the de facto Palestinian capital.

In a rare show of unity, Abbas’s Islamist rivals Hamas, who have ruled Gaza since a brief civil war in 2007, let supporters of the president’s Fatah movement hold rallies there.

In the West Bank towns of Hebron, Nablus and Jenin, as well as Ramallah, people gathered on rooftops and balconies, cheering patriotic songs blaring from speakers.

The crowds were boosted by last-minute declarations of support from west European countries, adding more weight to the victory in the 193-member U.N. General Assembly, which upgraded the Palestinian Authority’s observer status to a “non-member state”.

“Now we can drag Israel to international courts for crimes committed against Palestinians in Gaza, this is important for us,” Mohammad Issa in Ramallah said, as he listened to Abbas’s speech.

U.N. recognition would allow the Palestinians to take action against Israel at the International Court of Justice on charges of war crimes, crimes against humanity or other crimes the court would have jurisdiction over.

Nasser Abdel Hadi, owner of a famous Ramallah restaurant, baked a massive pizza in the red, white, green and black colours of the Palestinian flag.

“What Israel has done over the course of the past 60 years has been criminal,” he said. “They took our land, our children and our future. The battle is now at the United Nations.”

Israel, the United States and a handful of other U.N. members voted against what they see as a largely symbolic and counter-productive move by the Palestinians, insisting true statehood can only be achieved through a comprehensive Middle East peace treaty ending 65 years of intractable conflict.

A bid by Abbas last year for full statehood was defeated in the U.N. Security Council, where Washington has a veto.

He has pledged a prompt return to negotiations with Israel when he wins the upgrade from “entity” to “observer state”. Talks have been frozen for two years.

Palestinians seek a state in the West Bank, East Jerusalem and Gaza, land captured by Israel in the 1967 Arab-Israeli war.

Hamas leaders, who do not recognise the state of Israel, dropped their initial opposition to Abbas’ statehood move and gave it their backing but have not softened their opposition to the two-state solution Abbas advocates.

“We support any political achievement for our people to reach out and acquire a state,” Hamas Prime Minister Ismail Haniyeh said on Thursday.

But Haniyeh insisted Hamas’s position would not change, and stood “on the basis of non-recognition of the occupier and in commitment to our strategic and everlasting rights, foremost being the right of return (of Palestinian refugees).”

“We do not believe in the two-state solution,” Hamas chief Khaled Meshaal said earlier.

Hamas and other militants this month fought an eight-day conflict with Israel, which launched an offensive to halt rocket fire from Gaza into its southern towns. The brief war killed at least 170 Palestinians and six Israelis.

Palestinians Dance in Streets After Vote