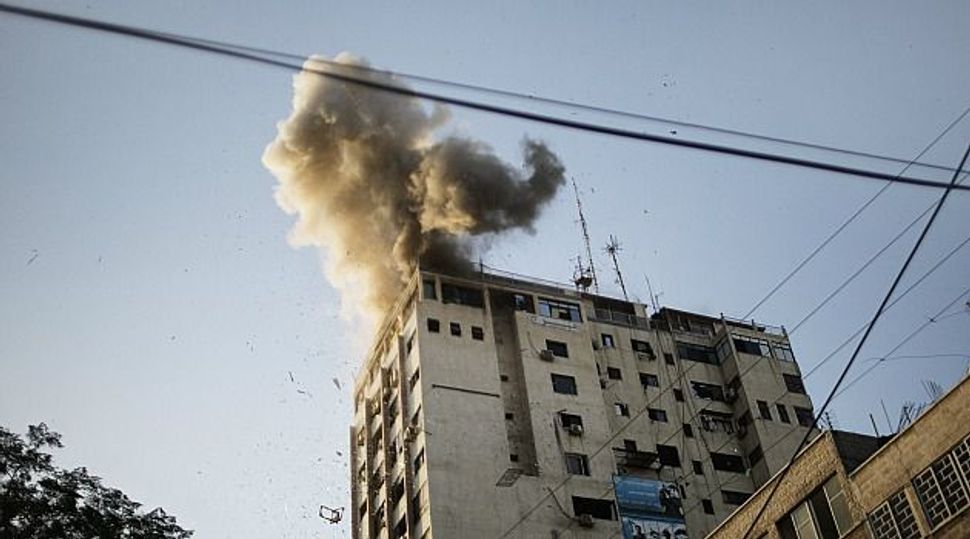 Targeted Strike: Watchdog group the Committee to Protect Journalists is demanding an explanation from Israel for this attack on a Gaza building housing media in which at least three journalists were killed. Image by getty images

A respected journalism watchdog group has demanded that Israel explain why it targeted journalists and buildings housing media during the recent conflict in Gaza.

In a letter to Israeli Prime Minister Benjamin Netanyahu, the Committee to Protect Journalists said it was “gravely concerned” over the attacks on journalists in Gaza, especially since they appeared to be specifically targeted by Israeli precision strikes.

“We request your government provide an immediate and detailed explanation for its actions,” CPJ executive director Joel Simon wrote.

The New-York based CPJ said two cameramen from the Gaza-based Al-Aqsa television station and the director of the indepedent Palestinian Al-Quds Educational Radio were killed in the attacks during Israel’s eight-day military campaign, which Israel said was designed to stop rocket fire from the Palestinian enclave.

At least three media buildings, including one housing Agence France Presse’s Gaza office, were hit during the conflict.

“But (officials) have disclosed no substantiation for these very serious allegations,” the letter reads.

The group says it has made repeated requests to Israel’s military and defence ministry seeking explanations.

Netanyahu’s spokesman Mark Regev said the journalists were used as “human shields” by Gaza’s Hamas rulers. He told AFP that Michael Oren, Israel’s ambassador to the U.S., would respond to the letter.

“People concerned about the wellbeing of journalists should possibly raise these concerns with both Hamas and Islamic Jihad, but I suppose one doesn’t have high expectations of terrorist groups,” he told the wire service.

CPJ said all journalists are entitled to protection under international law.

“The Israeli government does not have the right to selectively define who is and who is not a journalist based on national identity or media affiliation,” the group wrote.