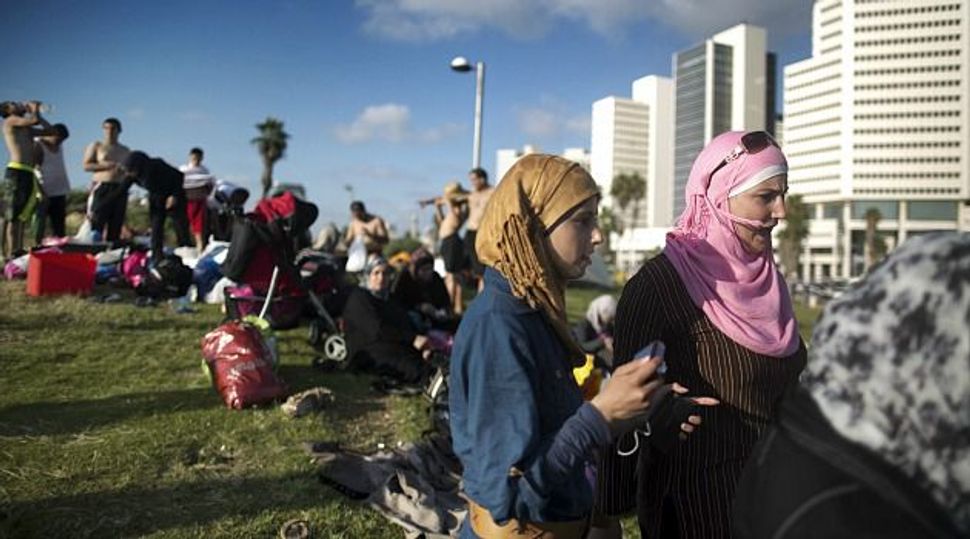 New Path: Israeli Arab political parties have long sat with the opposition. A new group seeks to enter the government to battle for a fair share of resources. Image by getty images

One Israeli Arab election candidate aims to lead his community out of the margins of Israeli politics – saying their interests have been overshadowed for too long by the Israeli-Palestinian conflict.

Atef Krinawi says he would even be willing to make an unprecedented electoral alliance with Prime Minister Benjamin Netanyahu’s right-wing Likud, the party to which he once belonged.

His success or failure in the Jan. 22 election could be a bellwether for the position of the Jewish state’s 20-percent Arab minority.

Krinawi argues that many Arabs want greater integration in Israel but are eclipsed, in public discourse, by those who identify more with their kindred Palestinians and anti-Zionism.

“Arab leaders have not been making demands for fair allocation of funds, or any other demand for that matter. All they do is fight,” the 42-year-old Krinawi told Reuters.

“People are thirsty for equality. I want to enter this government and demand full rights, peacefully.”

A Haifa University survey published on Dec. 11 found that, when asked what issues topped their agenda, 47 percent of Israeli Arab respondents listed unemployment, housing and education. Only 8 percent cited the Palestinians.

“Israelis and Palestinians should be left to sort out their own problems,” said Krinawi, who in his electioneering has spoken of Israel’s Arabs and Jews as being “the same people”.

Krinawi predicts that his newcomer “Hope for Change” party will garner as many as 10 of the 120 seats in parliament – the same number now held by Arab lawmakers from three leftist parties, which have invariably sat in the political opposition.

Independent experts have doubts about Hope for Change’s prospects, but most agree that there is disillusionment among Israeli Arabs over their established politicians’ focus on pro-Palestinian activism at the cost of promoting minority equality.

Arabs have equal voting rights in Israel but wield limited clout as a group. Some boycott elections, while others support mainstream, Jewish-dominated parties – usually those in the centre or left wing.

The lack of a unified voice has deepened Israeli Arabs’ resentment of what they regard as deep-set racial discrimination and neglect when it comes to the disbursement of state benefits.

Most Israeli Arabs, Muslim or Christian, are descendants of Palestinians incorporated into the Jewish state in the 1948 war of its founding, when hundreds of thousands of others were driven out.

Many Jewish citizens express outrage at some Arab compatriots’ sympathy with today’s Palestinian struggle against Israel.

Asked if Hope for Change might one day sit in government with Netanyahu’s Likud, which is running a joint slate with the far-right Israel Beiteinu party and is favoured to win next month’s election by a wide margin, Krinawi said: “I would be willing to sit in any coalition.”

Yet Krinawi and more seasoned Arab politicians must first overcome apathy and disenchantment spreading in their electorate.

The Haifa University poll found 67 percent of respondents lacked confidence in Arab parties, and that only half planned to vote, a slight drop from the last election in 2009. Eighty-three percent said they did not trust the Israeli government.

Krinawi has dangled promises such as improving the roads of Israeli Arab towns and establishing Israel’s first Arab university.

“People are in despair, but we want to restore their faith and give them a new sense of hope,” he said. (Writing by Jihan Abdalla; editing by Andrew Roche)