As Many as 27 Dead in Connecticut School Shooting 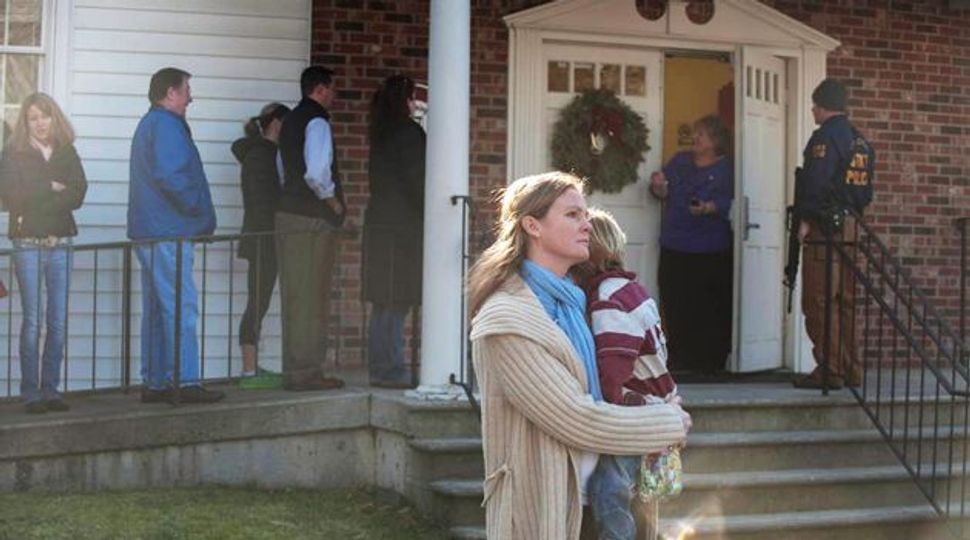 A woman holds a child near the the scene of an elementary school shooting in Newtown, Connecticut. Image by getty images

A heavily armed gunman opened fire inside a Connecticut elementary school on Friday, killing 26 people, including 20 children, in the latest in a series of shooting rampages across the United States this year, U.S. media reported.

Vance said the gunman killed 18 children and six adults at the school and two wounded children died later in the hospital. Another person connected to the suspect was found dead at a house in Newtown, bringing the death toll to 28.

The suspected gunman entered the school as children were gathered in their classrooms for morning meeting. He was armed with four weapons and wore a bullet-proof vest, WABC reported.

If confirmed, it would be one of the worst mass shootings in U.S. history. The holiday season tragedy was the second shooting rampage in the United States this week and was certain to revive a debate about U.S. gun laws.

President Barack Obama, wiping away tears and pausing to collect his emotions, mourned the “beautiful little kids between the ages of 5 and 10 years old” who were killed.

“As a country we have been through this too many times,” Obama said, ticking off a list of recent shootings.

“We’re going to have to come together and take meaningful action to prevent more tragedies like this, regardless of the politics,” Obama said in apparent reference to the influence of the National Rifle Association over members of Congress.

Witnesses reported hearing dozens of shots with some saying as many as 100 were fired.

Another person was being held in police custody after he was detained in the woods near the school wearing camouflage pants, CBS reported.

“It was horrendous,” said parent Brenda Lebinski, who rushed to the school where her daughter is in the third grade. “Everyone was in hysterics – parents, students. There were kids coming out of the school bloodied. I don’t know if they were shot, but they were bloodied.”

Television images showed police and ambulances at the scene, and parents rushing toward the school. Parents were seen reuniting with their children and taking them home.

“This is going to be bad,” a state official told Reuters, requesting anonymity because the scope of the tragedy remained uncertain.

Lebinski’s daughter’s teacher “immediately locked the door to the classroom and put all the kids in the corner of the room.”

Murphy has a friend with a daughter in Sandy Hook, and the daughter is OK. She did get an automated call from the school department this morning saying there was a “possible shooting” at the elementary school and that all schools were on lockdown.

Melissa Murphy, who lives near the school, monitored events on a police scanner.

“I kept hearing them call for the mass casualty kit and scream, ‘Send everybody! Send everybody!’” Murphy said. “It doesn’t seem like it can be really happening. I feel like I’m in shock.”

A girl interviewed by NBC Connecticut described hearing seven loud “booms” while she was in gym class. Other children began crying and teachers moved the students to a nearby office, she said.

“A police officer came in and told us to run outside and so we did,” the unidentified girl said on camera.

The United States has experienced a number of mass shooting rampages this year, most recently in Oregon, where a gunman opened fire at a shopping mall on Tuesday, killing two people and then himself.

The deadliest came in July at a midnight screening of a Batman film in Colorado that killed 12 people and wounded 58.

The Sandy Hook tragedy would be the deadliest elementary school shooting in U.S. history.

The worst U.S. high school shooting happened in 1999 when two students, Dylan Klebold and Eric Harris, went on a rampage at Columbine High School in Littleton, Colorado, killing 12 students and a teacher before turning their guns on themselves.

In 2007, 32 people were killed at Virginia Tech university in the deadliest act of gun violence in U.S. history.

In another notorious school shooting outside of the United States, in 1996 a gunman opened fire in an elementary school in Dunblane, Scotland, and killed 16 children and an adult before killing himself.

As Many as 27 Dead in Connecticut School Shooting