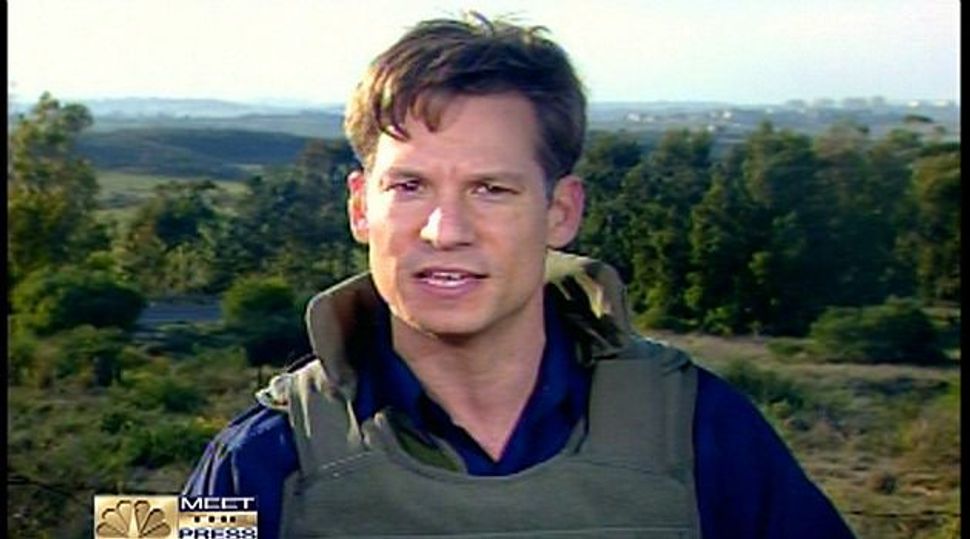 Free To Report: Richard Engel and his NBC news team were captured in wartorn Syria last week. The network asked journalists not to report on the incident, a request that was mostly honored. Image by getty images

NBC’s Richard Engel revealed harrowing details of his five days as a captive of a Syrian armed group, telling of endless threats and mock executions by the kidnappers.

The Jewish newsman spoke out after he and his crew were freed Tuesday during a dramatic firefight at a rebel checkpoint.

“Then they took us to a series of safe houses and interrogation places, and they kept us blindfolded, bound,” Engel said. “We weren’t physically beaten or tortured. It was a lot of psychological torture, threats of being killed,” and mock shootings, he said. “It was a very traumatic experience.”

Engel, 39, who along with production crew members Ghazi Balkiz and John Kooistra disappeared after crossing into northwestern Syria from Turkey on Thursday, said their kidnappers were members of a militia loyal to President Bashar al-Assad.

Their ordeal ended when their captors, who frequently moved them bound and blindfolded between safe houses, on Monday night unexpectedly drove into checkpoint set up by an Islamist rebel group. Two of their kidnappers were killed in the ensuing firefight, and the three spent the night with the Islamist rebels, Engel told the network.

The three were kidnapped when they were driving with anti-Assad rebels in a rebel-controlled area, Engel, an American, told NBC’s “Today” program from Antakya, Turkey.

A group of about 15 heavily armed men wearing ski masks “jumped out of the trees and bushes on the side of the road,” seized the three and put them in a container truck, Engel said.

“We tried to joke around a little and keep our spirits up,” Engel said, adding that they could peek under blindfolds but were not allowed to talk.

NBC identified the rebels at the checkpoint as members of the Ahrar al-Sham brigade, a Syrian rebel group.

The network said it had not been able to contact them until they were freed. NBC had attempted to keep the crew’s disappearance secret but several media outlets ignored the requested blackout.

There was no claim of responsibility and no request for ransom, NBC said, but Engel said of the captors: “This was a group known as the Shabiha. This is a government militia. These are people who are loyal to President Bashar Assad.”

The kidnappers spoke openly about their loyalty to the government and their faith, he said, and were planning to exchange him and his team for four Iranian agents and two Shabiha members held by Syrian rebels.

Ahrar al-Sham, an extremist Salafist group that includes a large contingent of foreign fighters, has been at the forefront of rebel offensives in northern Syria.

Members of the group have told Reuters the unit wants to establish an Islamic caliphate in Syria, not a pluralistic democracy, when Assad is overthrown. But they have not shown hostility to Western journalists covering the conflict.

Engel has reported on the popular uprisings that swept the Arab world since 2011.

At least 40,000 people have been killed in Syria’s uprising, which started in March 2011 with street protests that were met with gunfire by Assad’s security forces, and which spiralled into the most enduring and destructive of the Arab revolts.