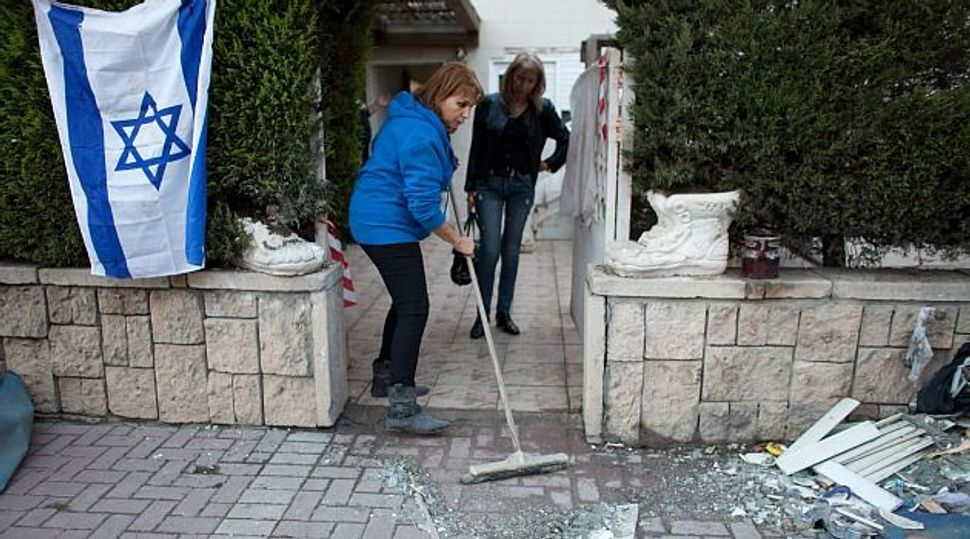 Terror Rockets: Human Rights Watch says rocket attacks like this one on Israeli civilians violate the rules of war. Image by getty images

The New York-based group also said that militant organisations in the territory, which is ruled by the Islamist movement Hamas, put Palestinian civilians in harm’s way by firing the rockets from within densely populated areas.

Hamas spokesman Sami Abu Zuhri dismissed the charges: “This report is biased because it equates a nuclear-armed country using all means of aggression against civilians and a people subject to the occupation who are defending themselves against Israeli violations of international accords amid the silence of the international community,” he said.

Israel launched a Nov. 14-21 air offensive with the declared aim of ending persistent rocket barrages on its territory.

Medical officials in the Gaza Strip said some 170 Palestinians, mostly civilians, were killed in the hostilities. HRW said two of the Palestinian dead were apparently hit by rockets that fell short of their intended targets in Israel.

Six Israelis, including two soldiers, were killed in rocket strikes, the Israeli police and military said.

“Palestinian armed groups made clear in their statements that harming civilians was their aim. There is simply no legal justification for launching rockets at populated areas,” HRW said in a report.

It said rocket crews fired from areas “near homes, businesses and a hotel, unnecessarily placing civilians in the vicinity at grave risk from Israeli counter-fire”.

As the ruling authority in the Gaza Strip, Hamas should, “stop unlawful attacks and punish those responsible”, HRW said. “The laws of war prohibit reprisal attacks against civilians, regardless of unlawful attacks by the other side”, it added.

In reports issued earlier this month, HRW said Israel had targeted journalists and killed 12 members of a single family in a strike on their home, violating the laws of war.

The Israeli military said in response to the HRW allegations that it “acts in accordance with the laws of armed conflict, despite the ongoing deliberate violations and abuse of these laws by the terrorist organisations in the Gaza Strip”