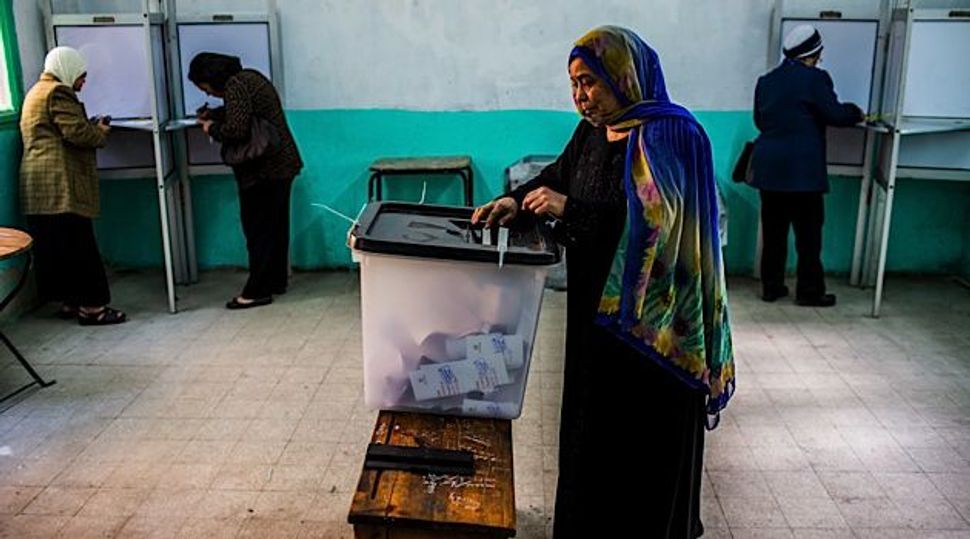 Egyptian voters overwhelmingly approved a constitution drafted by President Mohamed Mursi’s allies, results announced on Tuesday showed, proving that liberals, leftists and Christians have been powerless to halt the march of Islamists in power.

Final elections commission figures showed the constitution adopted with 63.8 percent of the vote in the referendum held over two days this month, giving Mursi’s Islamists their third straight electoral victory since veteran autocrat Hosni Mubarak was toppled in a 2011 revolution.

Opposition groups had taken to the streets to block what they see as a move to ram through a charter that mixes politics and religion dangerously and ignores the rights of minorities.

Mursi says the text – Egypt’s first constitution since Mubarak’s fall – offers enough protection for minorities, and adopting it quickly is necessary to end two years of turmoil and political uncertainty that has wrecked the economy.

“I hope all national powers will now start working together now to build a new Egypt,” Murad Ali, a senior official in the Muslim Brotherhood’s Freedom and Justice Party, told Reuters.

“I see this as the best constitution in Egypt’s history.”

In a sign that weeks of unrest have taken a further toll on the economy, the government ordered new restrictions on foreign currency apparently designed to prevent capital flight. Leaving or entering with more than $10,000 cash is now banned.

Two years since waves of unrest broke out across the Middle East and North Africa – sweeping away long-entrenched rulers in Tunisia, Libya and Yemen as well as Egypt – well-organised Islamist parties have emerged as the main beneficiaries.

Urban secularists and liberals who were behind the revolts complain that their success has been hijacked.

“We need a better constitution,” said Khaled Dawood, an opposition spokesman. “It does not represent all Egyptians.”

Mursi’s opponents say the new constitution could allow clerics to intervene in lawmaking, while offering scant protections to minorities and women. Mursi dismisses those criticisms, and many Egyptians are fed up with street protest movements that have prevented a return to normality.

Immediately after the announcement, a small group of protesters set tyres on fire and blocked traffic near the central Tahrir square, the cradle of Egypt’s uprising, but there were no immediate signs of violence or major demonstrations.

Washington, which provides billions of dollars a year in military and other support for Egypt and regards it as a pillar of security in the Middle East, called on Egyptian politicians to bridge divisions and on all sides to reject violence.

“President Mursi, as the democratically elected leader of Egypt, has a special responsibility to move forward in a way that recognises the urgent need to bridge divisions,” State Department spokesman Patrick Ventrell said. He noted that many Egyptians had voiced “significant concerns” over the constitutional process.

The government says its opponents are worsening the economic crisis by prolonging political upheaval. It has pledged to impose unpopular tax increases and spending cuts to win a loan package from the International Monetary Fund.

The ban on travelling with more than $10,000 in cash followed a pledge by the central bank to take unspecified measures to protect Egyptian banks. Some Egyptians have begun withdrawing their savings in fear of more restrictions.

“I am not going to put any more money in the bank and neither will many of the people I know,” said Ayman Osama, father of two young children.

He said he had taken out the equivalent of about $16,000 from his account this week and planned to withdraw more, adding that he had also told his wife to buy more gold jewellery.

The “yes” vote paves the way for a parliamentary election in about two months, setting the stage for another battle between surging Islamists and their fractious opponents.

The final result, announced by the election commission, matched – to the last decimal place – an earlier unofficial tally announced by Mursi’s Muslim Brotherhood.

But the opposition said it was disappointed – it had appealed for the result to be amended to reflect what it described as major vote violations during the two-round vote.

Officials said there were no violations serious enough to change the result significantly. “We have seriously investigated all the complaints,” said judge Samir Abu el-Matti of the Supreme Election Committee. The final turnout was 32.9 percent.

The referendum has sharpened painful divisions in the Arab world’s most populous nation and a growing atmosphere of crisis has gripped Egypt’s polarised society.

Anxiety about the economy deepened this week when Standard and Poor’s cut Egypt’s long-term credit rating. Prime Minister Hisham Kandil told the nation of 83 million on Tuesday the government was committed to fixing the economy.

“The main goals that the government is working towards now is plugging the budget deficit, and working on increasing growth to boost employment rates, curb inflation, and increase the competitiveness of Egyptian exports,” he said.

The referendum follows Islamist victories in parliamentary and presidential elections, representing a decisive shift in a country at the heart of the Arab world where Mursi’s Muslim Brotherhood was suppressed for generations by military rulers.

However, secularist and liberal opposition members hope they can organise better in time for the next parliamentary vote.

Hossam El-Din Ali, a 35-year-old newspaper vendor in central Cairo, said he agreed the new constitution would help bring some political stability but like many others he feared the possible economic austerity measures lying ahead.

“People don’t want higher prices. People are upset about this,” he said. “There is recession, things are not moving. But I am wishing for the best, God willing.”