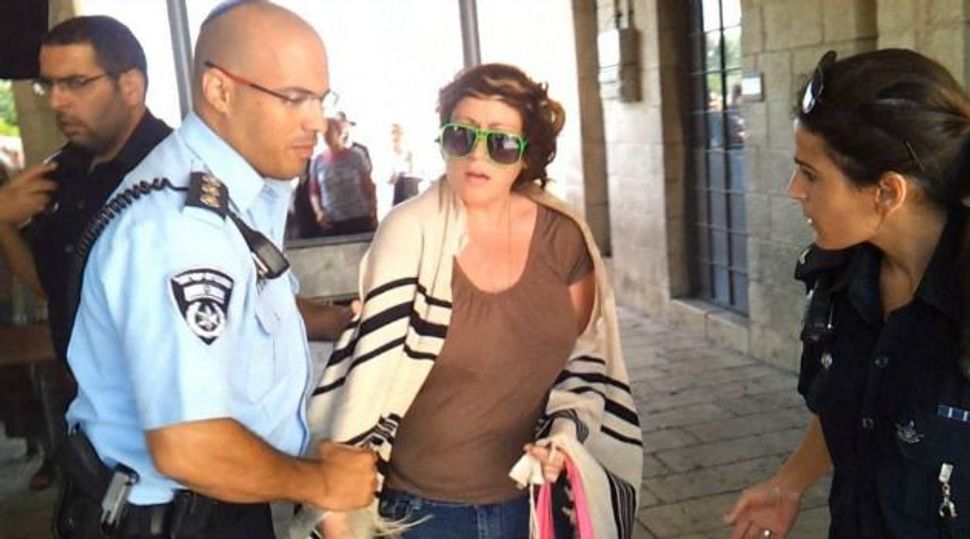 For All? Deb Houben of Boston is bundled away by police for wearing a prayer shawl ?incorrectly? at Western Wall last summer. Image by women of the wall

Few American tourists to Israel forget their first visit to the Western Wall. They put notes in the cracks, whisper prayers and take photos against the backdrop of Judaism’s holiest site.

But Kobi Bachar of Tel Aviv can’t remember the last time he visited.

“I was there maybe 10 years ago,” said Bachar, who is secular. “It doesn’t interest me.”

For years, American Jewish organizations have railed against the haredi Orthodox restrictions placed on religious expression at the Western Wall that prohibit egalitarian prayer and bar women from singing out loud and donning religious articles.

In response to the criticism, which has amplified in recent months in the wake of several highly publicized confrontations between Israeli police and female activists at the wall, Israeli Prime Minister Benjamin Netanyahu asked Natan Sharansky, the chairman of the Jewish Agency for Israel, to review the wall’s policies and recommend changes.

But among the Israeli secular majority, such restrictions rank near the bottom of a long list of church-state issues they would like to address.

The prohibitions are “something we need to be done with, but there are other issues that affect larger sectors of society,” said Alon-Lee Green, an activist with the far-left Hadash political party. Green said he was more passionate about other issues of women’s rights in Israel, as well as with Israel’s prohibition of civil marriage.

Haredi rabbis dominate Israel’s Chief Rabbinate and thus control not only the Western Wall, known in Hebrew as the Kotel, but also civil matters such as marriage, divorce and burial. For most Israelis, religious rules governing these aspects of their lives are far more intrusive and onerous than limitations on prayer at a site they never visit.

“Many people feel there are so many battles to be fought, they just gave up on the Kotel,” said Lesley Sachs, director of Women of the Wall, a group that organizes a monthly women’s service at the wall. Sachs and other worshipers at the service are frequently detained by police for disobeying the Kotel’s prohibitions.

For many Diaspora Jews, the Kotel is a symbol of the millennia-old Jewish connection to the promised land and an inspirational place of pilgrimage and prayer. Secular Israelis are more apt to see the site as a national monument for which Israeli blood was shed during the 1967 Six-Day War, when Israel recaptured eastern Jerusalem from Jordanian control.

“It’s a religious bubble there,” said Ofer Pomerantz, a secular Tel Aviv resident. “The average Israeli is not religious. When I think of those places, I think of the blood spilled over them.”

Many secular Israelis also see the fight for egalitarianism at the wall as a distinctly foreign issue. The Reform and Conservative movements, whose members have championed the cause of women’s prayer at the wall, remain quite small in Israel. Most secular Israelis see Orthodoxy as the normative expression of Judaism.

“It’s a holy site,” said Shalhevet Adar, a secular artist who also lives in Tel Aviv. “People who go there know where they’re going. It’s a little annoying, but I’m not fighting.”

Adar described the Kotel as Israel’s version of the Leaning Tower of Pisa, a national landmark with historical significance but little spiritual appeal.

Tamar, a filmmaker who asked that her last name not be used, says when she goes to the Kotel, “I’m not looking for more than to be there and put a note in the wall.