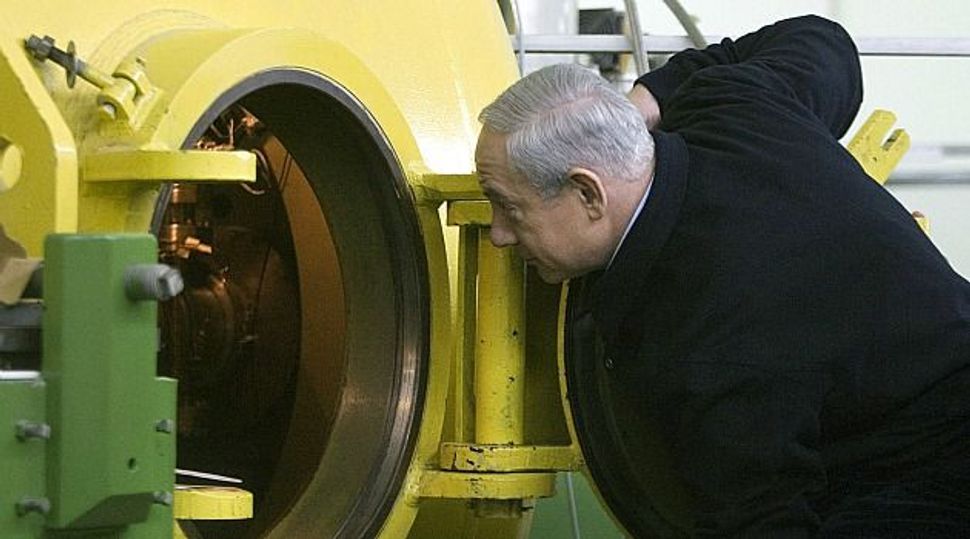 Right On, Bibi: Benjamin Netanyahu visits a university in the Jewish settlement of Ariel on the West Bank. The Israeli premier is tacking to the right as the election nears. Image by getty images

It’s Bibi against the world on a campaign trail that took the combative Israeli prime minister to a Jewish settlement on Tuesday.

Enjoying a wide opinion poll lead before a Jan. 22 election, Benjamin Netanyahu has been lecturing the international community – vocal in its criticism of settlement expansion on occupied territory and his hints of military action against Iran – about what it should really be worried about.

The right-wing candidate, known by his childhood nickname “Bibi”, has been striving in campaign appearances to strike a common chord in a country where a song titled, “The whole world is against us”, was once a hit.

“The great danger to the world is not from Jews building in our ancestral capital in Jerusalem, it’s from nuclear weapons in Iran,” Netanyahu said on Monday in a speech in the holy city, to which both Israel and the Palestinians stake claims.

A day later, he travelled to Ariel, a major Jewish settlement in the occupied West Bank, where his government’s granting of university status to a college last month drew international condemnation.

Tweaking his message to match the locality, Netanyahu said: “The danger to the world is not from the university in Ariel or Israeli construction in the neighbourhoods of Jerusalem. The danger comes from Iran, which is building nuclear weapons.”

Iran says its nuclear programme is for peaceful energy only.

Netanyahu has long been at odds with even Israel’s closest Western allies over settlement building in the West Bank, territory captured in a 1967 war that Palestinians seek as part of a future state.

His tough talk on Iran, hinting heavily that Israel might attack its nuclear facilities unilaterally unless international sanctions persuade Tehran to halt uranium enrichment, has raised the alarm in world capitals.

The civil war in nearby Syria and Israeli fears that Syrian chemical weapons could fall into the hands of Islamist rebels also figure high on Netanyahu’s campaign list of eye-openers for foreign leaders.

“I call on the world to wake up. History will judge severely those who equate democratic Israel, which is establishing a university (in Ariel), to those tyrannical regimes slaughtering their countrymen and possessing weapons of mass destruction,” he said during his visit to the settlement.

Running under the campaign slogan, “A strong prime minister, a strong Israel”, Netanyahu’s Likud party, allied in the election with the ultranationalist Yisrael Beitenu faction, has lost some ground to a start-up far-right party led by high-tech millionaire Naftali Bennett.

But opinion polls still count Netanyahu as a shoo-in to enlist right-wing parties after the vote and form the next coalition government. In Israel, no single party has ever won a parliamentary majority.

Bennett, a former settler leader, opposes a Palestinian state and wants to annex about 60 percent of the West Bank.

Netanyahu is still formally committed to the establishment of a Palestinian state as part of a peace deal with Israel, while raising conditions – many of them already rejected by the Palestinians – for its creation.

But he has been making clear to voters that he intends to plough ahead with settlement construction, suggesting it is a sacred duty.

“We remain loyal to our homeland will continue to protect our citizens, develop our country and build in our land,” Netanyahu said in Ariel.

“With God’s help, we will build and we will succeed.”