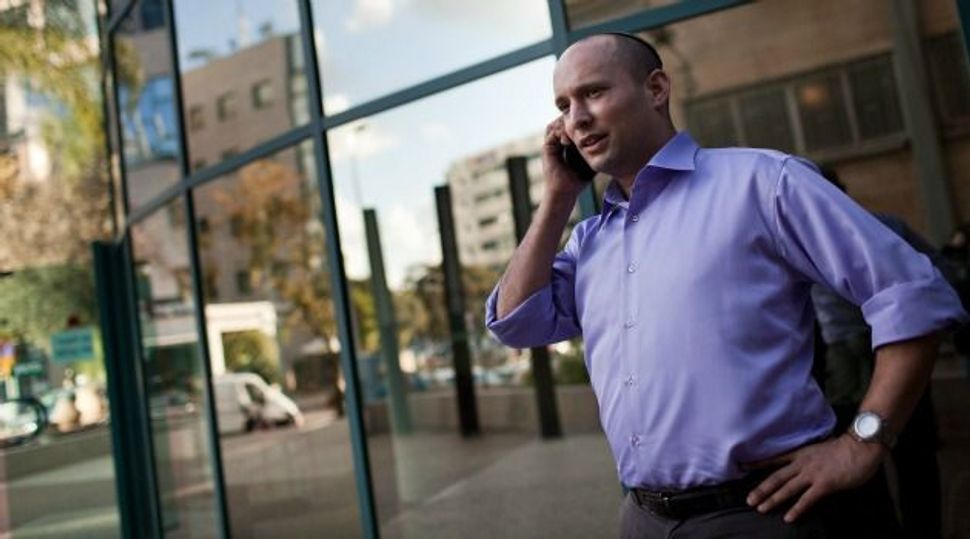 Right of Right: Naftali Bennett opposes the two-state solution, is surging in the polls and forcing Benjamin Netanyahu to take notice. Image by getty images

A right-wing millionaire who says a Palestinian state would be suicide for Israel has emerged as the surprise success story of the country’s election campaign.

So much so that Naftali Bennett, a former aide to Prime Minister Benjamin Netanyahu who is said to have fallen out with his old boss, is now expected to face the Israeli leader across the cabinet table after the Jan. 22 election.

Opinion polls show Bennett’s far-right, and revamped, Bayit Yehudi (Jewish Home) seems to appeal to many voters, predicting the party will finish third in the parliamentary election that Netanyahu is widely forecast to win.

Commentators have suggested personal relations between the two party leaders may be testy, noting that Bennett’s time in Netanyahu’s office ended on a sour note, though publicly both men have remained tight-lipped on the matter.

Netanyahu has been jarred by Bennett’s chipping away at his Likud party’s support. This week he gave radio interviews, which he rarely does, and called on his traditional supporters not to be swayed by smaller parties and to vote for him.

Dismissing as a “dead end” efforts to achieve a two-state solution to the Israeli-Palestinian conflict, Bennett wants to annex more than half of the occupied West Bank and give autonomy to Palestinians.

“Forming a Palestinian state within the Land of Israel would spell eternal strife and war and bloodshed,” Bennett said in American-accented English, reminiscent of that of his former boss, Netanyahu, in an interview with Reuters.

“How would you feel if the entire world is in consensus that you need to commit suicide. Would you go ahead and commit suicide if you’re sure that it is wrong?” said Bennett, the Israeli-born son of parents from San Francisco.

Bennett, a 40-year-old millionaire who was a senior aide to Netanyahu from 2006 to 2008, is a former commando who sold his anti-fraud software company, Cyota, to U.S. security firm RSA for $145 million in 2005.

He is a likely partner in any future Netanyahu-led coalition government, a prospect that could raise international concern over a further turn to the right in Israel.

Netanyahu has formally embraced the two-state solution, but his expansion of settlements has drawn sharp international criticism in recent months and some Likud lawmakers consistently call for annexation of the enclaves.

Netanyahu is unlikely to adopt Bennett’s annexation plan and bring a diplomatic storm down on Israel. But he could face pressure from Bennett, emboldened by a strong showing for his party and a subsequent cabinet post, to step up settlement construction even further.

Bennett said a Palestinian state in the West Bank would compromise Israel’s security and end up being a base for militants who could fire missiles into the commercial centre of the country from a shorter distance than gunmen who have launched such attacks from Gaza.

“What the world is suggesting is to hand this mountain (the West Bank) over to an enemy who has killed already thousands of Israelis just over the past few years and pray for the best, he said.

“I have four kids living just six kilometres from this big mountain. I’m not going to do it, I’m not going to willingly commit suicide even if the world doesn’t like it,” said Bennett, an Orthodox Jew who resides in an affluent Tel Aviv suburb.

More than 1,000 Israelis have been killed in suicide bombings, shootings, stabbings and rocket attacks by Palestinian militants. Most died during a Palestinian uprising in the previous decade, that engulfed Israel, the West Bank and Gaza.

Bennett advocates the annexation of “Area C”, or 60 percent of the West Bank, and Israeli citizenship for what he says are the 50,000 Palestinians who live in that part of the territory – where the biggest of Israel’s settlements have been built.

The United Nations estimates that 150,000 Palestinians live in “Area C”.

Under his plan, Israel would give autonomy to the rest of the 2.5 million Palestinians in the West Bank. Some 500,000 Israelis live in the West Bank and East Jerusalem, areas captured in a 1967 war, in settlements most of the world views as illegal.

“Before we go about annexing, we have to reverse Israel’s position and the world’s position vis-à-vis forming a Palestinian state and only then very gradually apply Israeli law on the Israeli parts of Judea and Samaria,” Bennett said, using the Biblical names for the West Bank.

Peace talks between Israel and the Palestinians broke down in 2010 in a dispute over Israeli settlement construction.

In November, the United Nations General Assembly upgraded the Palestinians’ diplomatic status from “observer entity” to “observer state”. The Palestinian bid won an overwhelming world majority and was a diplomatic defeat for Israel and the United States, who opposed it.

“Sometimes common wisdom is wrong. I think this is one of those cases. We are all together on a bus, with the whole international community, riding towards a dead end,” Bennett said, “Maybe it’s time for a new approach.”

Bennett’s annexation plan is hardly new to the settler electorate. The notion has long been embraced by hard-line ideological settlers who believe all of the Biblical Land of Israel was promised to the Jews by God.

The proposal is not prominent in the party’s campaign and Bennett, a former settlers’ council leader in the West Bank, has described the Israeli-Palestinian conflict as the “most boring” issue on the agenda.

When he does speak of his plan, Bennett does not cite historic and biblical ties to the territory as a reason for annexation, but focuses instead on security in an apparent effort to draw support from more mainstream Israelis.

In fact, writing off the conflict with the Palestinians as unsolvable may be part of Bennett’s appeal. Many Israelis, much like Palestinians, are disillusioned with a peace process that began two decades ago but has failed to achieve a final agreement.

For its part, Likud has portrayed Netanyahu as the only experienced leader on the map, able to meet security challenges ranging from Iran’s nuclear programme to rockets controlled by Islamist militants on Israel’s borders.

Netanyahu’s security credentials have partly been boosted by an eight-day war Israel fought with Palestinian militants in the Gaza Strip in November that has, so far, ended rocket attacks on the Jewish state.

Since winning leadership, Bennett has revamped his party with fresh, young faces running under the slogan “something new is beginning”.

The party’s television ads use tongue-in-cheek humour and have so far highlighted the more moderate candidates on the party list, appealing for a return to Jewish values and uniting an ethnically-frought Israeli society.

Bennett said he knows that his annexation plan is “not perfect” but that he believes a way can be found for Israelis and Palestinians to live in peace.