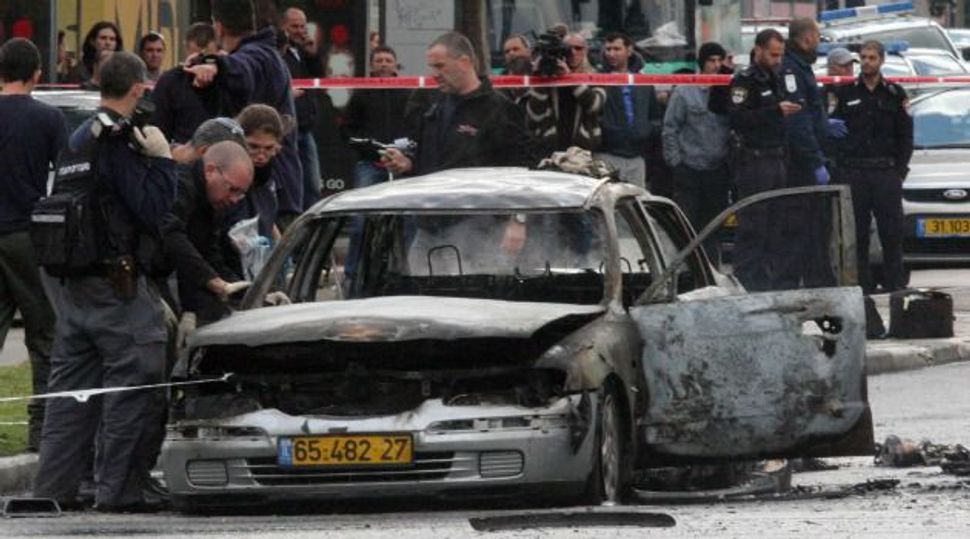 Mafia Strikes: Israeli police investigate wreckage of car that was detonated in downtown Tel Aviv. They suspect a mob hit, not terror, was the motive. Image by getty images

A car exploded near a bus in Tel Aviv on Thursday, injuring four people in what police suspect was an attempt to kill an alleged criminal kingpin.

Israel Radio said the car belonged to the head of an alleged organised crime family.

“This is a criminal related incident,” police spokesman Micky Rosenfeld said, suggesting they believed the attack was not carried out by a Palestinian militant.

Police said four people were injured in the explosion on Menachem Begin Street, a main thoroughfare.

“There was a fire and I heard an explosion,” a witness said on Israel Radio as ambulance and police vehicle sirens screamed in the background.

Rosenfeld said police suspect the blast was a possible assassination attempt against organised crime leaders. They were investigating reports that “someone on a motorcycle either planted an explosive or threw it inside the vehicle.”

The last bombing in Tel Aviv, Israel’s business hub, wounded 15 people on a bus on Nov. 21, during an eight-day military campaign against Hamas Islamist militants in the Gaza Strip.

An Israeli Arab citizen was charged in court with carrying out that attack on Hamas’ behalf.