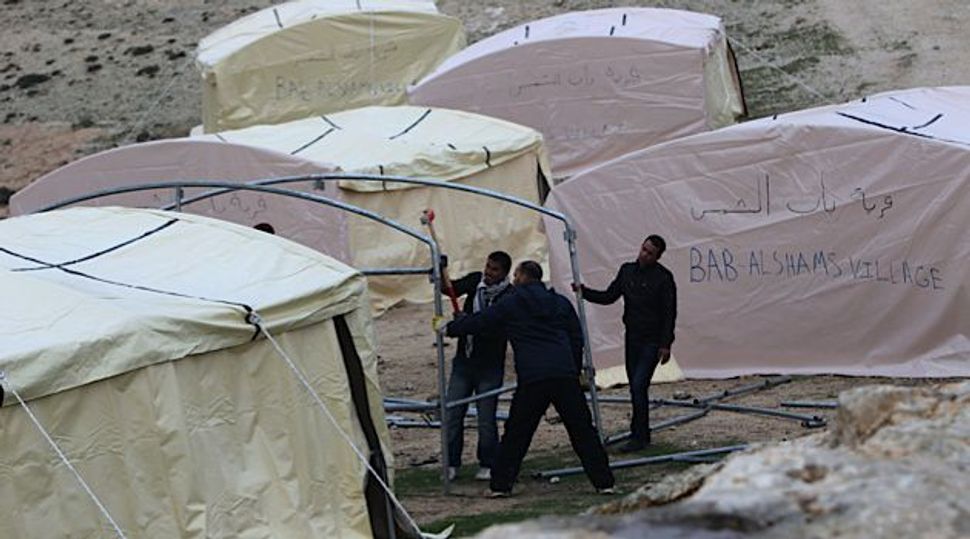 Palestinians from villages in the occupied West Bank near Jerusalem pitched tents on Friday on land Israel has earmarked for a new urban settlement, looking to preserve the area for an independent Palestinian state.

Scores of Palestinians erected about 20 large, steel-framed tents on a windswept hillside in an area known as E1, a geographically sensitive area where Israel announced last month it would build homes for hundreds of settlers.

“We are setting up a Palestinian village here where people will stay permanently in order to protect this Palestinian land,” said Mohammad Khatib, one of the organisers of the tent village.

The tents were erected in an area close to established Palestinian villages that lie on slopes north-east of Jerusalem and overlook the descent to the Dead Sea.

Palestinians named their encampment “Bab el Shams”, which means “Gateway to the Sun” in Arabic.

“This is not a symbolic act, but comes in response to Israeli settlement building and we are sending a message to the international community that urgent action must be taken against Israel’s settlement construction,” Khatib said.

Although there was no immediate response from the Israeli authorities, police and soldiers in the past have moved quickly to shut down any such spontaneous Palestinian camps

International powers view all settlement building in areas captured by Israel in the 1967 Arab-Israeli War as detrimental to securing an Israeli-Palestinian peace deal.

Prime Minister Benjamin Netanyahu has come in for heavy criticism for a wave of recent announced settlement building in areas captured by Israel in the 1967 Arab-Israeli War.

However, his pledge last November to build on E1 caused an especial outcry, with European diplomats warning that it could kill off any hope of creating a contiguous Palestinian state.

The site covers some 4.6 square miles (12 square km) and is seen as particularly important because it not only juts into the narrow “waist” of the West Bank, but also backs onto East Jerusalem, where Palestinians want to establish their capital.

Israeli building in E1 would create a linked-up stretch of Jewish neighbourhoods in the West Bank between Pisgat Zeev on the outskirts of Jerusalem, and Maale Adumim, an urban settlement of some 30,000 Israelis.

For years Israel froze building in E1, which currently houses only a police headquarters, after coming under pressure from former U.S. President George W. Bush.

But Netanyahu announced a wave of settlement initiatives, including in E1, after the Palestinians won de-facto statehood recognition at the United Nations General Assembly last year.

Palestinians want to establish an independent state in the West Bank, which is partially controlled by Palestinian President Mahmoud Abbas, and the Gaza Strip, which is run by a rival faction, the Islamist group Hamas.

Approximately 500,000 Israelis and 2.5 million Palestinians live in the West Bank and East Jerusalem. Direct peace talks between Israel and the Palestinians broke down in 2010 over the issue of continued settlement building.