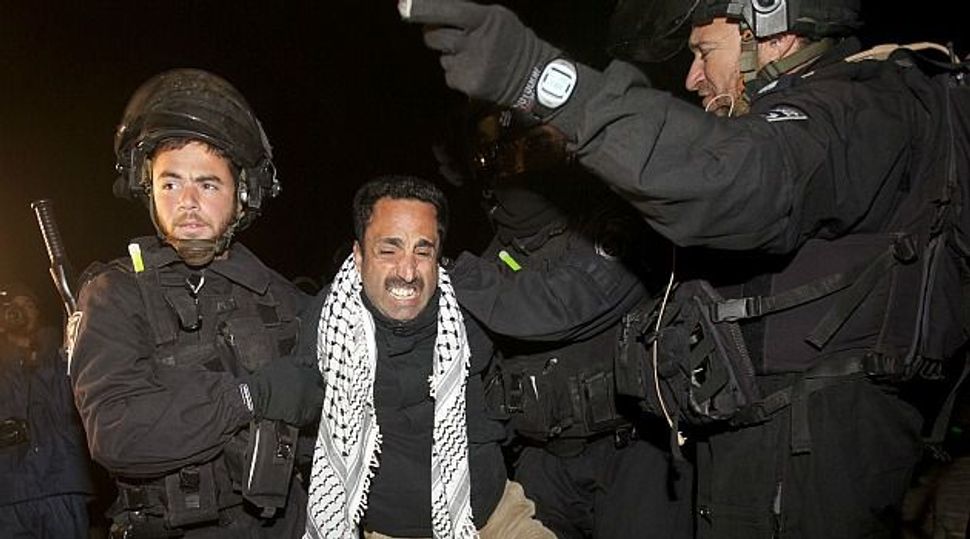 E1 Eviction: Israeli security forces bundle a Palestinian protester into custody Sunday at a tent city in the E1 section of the occupied West Bank. Image by getty images

Israeli security forces removed about 100 Palestinians early on Sunday from tents pitched in an area of the West Bank as a protest against Israeli plans to build a settlement there.

Israel’s Supreme Court ruled on Friday that the Palestinian outpost, built in the geographically sensitive area known as E1, could remain for six days while the issue of the removal of the tents was being discussed.

A police spokesman said the court allowed for the removal of the protesters even if the tents, for now, will stay.

Israeli Prime Minister Benjamin Netanyahu said he had ordered the area sealed off to prevent clashes.

“I immediately called for the area to be closed off so there would not be large gatherings there that could cause friction and breach the public order,” he told Army Radio.

“We will not let anyone block the continuum between Jerusalem and Ma’aleh Adumim,” Netanyahu added, referring to the large Jewish settlement that is nearby but deeper into the occupied West Bank.

Netanyahu praised Israeli security forces for their handling of the incident.

“t was indeed carried out last night in the best possible manner,” Netanyahu said at Sunday’s regular Cabinet meeting. “I would like to praise the Israel Police.”

Hundreds of Israeli police and border guards entered the compound and told a crowd of about 100 to leave the 20 large, steel-framed tents erected on Friday.

Those protesters who refused to leave were carried down the hill by Israeli officers and detained, but were not jailed. Israeli police vans took them to the West Bank town of Ramallah, the Palestinian seat of government.

“Everyone was evacuated carefully and swiftly, without any injuries to officers or protesters,” said police spokesman Micky Rosenfeld.

“The eviction and the exercise of force is another indication that Israel is defying the international consensus on the need to vacate occupied Palestinian land,” Palestinian government spokesman Nour Odeh said.

For years, Israel froze building in E1, which currently houses only a police headquarters, after coming under pressure from former U.S. President George W. Bush.

Netanyahu said Israel would build at E1 after the planning process was completed.

“It is a gradual process, it will take time. It will not happen immediately, you understand our bureaucratic process … We will complete the planning an there will be building there,” he told Army Radio.

Israel announced plans to expand settlements, mainly in West Bank areas around Jerusalem, after the Palestinians won de-facto recognition of statehood at the U.N. General Assembly in November.

International powers view all Jewish settlement building in areas captured by Israel in the 1967 Arab-Israeli War as detrimental to securing an Israeli-Palestinian peace deal.

E1 covers 4.6 square miles (12 square km) and is seen as particularly important because it not only juts into the narrow “waist” of the West Bank, but backs onto East Jerusalem.

Palestinians want to establish an independent state in the West Bank, dominated by Palestinian President Mahmoud Abbas’ Fatah faction, and the Gaza Strip, run by the rival Islamist group Hamas, with East Jerusalem as the capital.

About 500,000 Israelis and 2.5 million Palestinians live in the West Bank and East Jerusalem. Direct peace talks between Israel and the Palestinians broke down in 2010 over the issue of Israel’s continued settlement building.