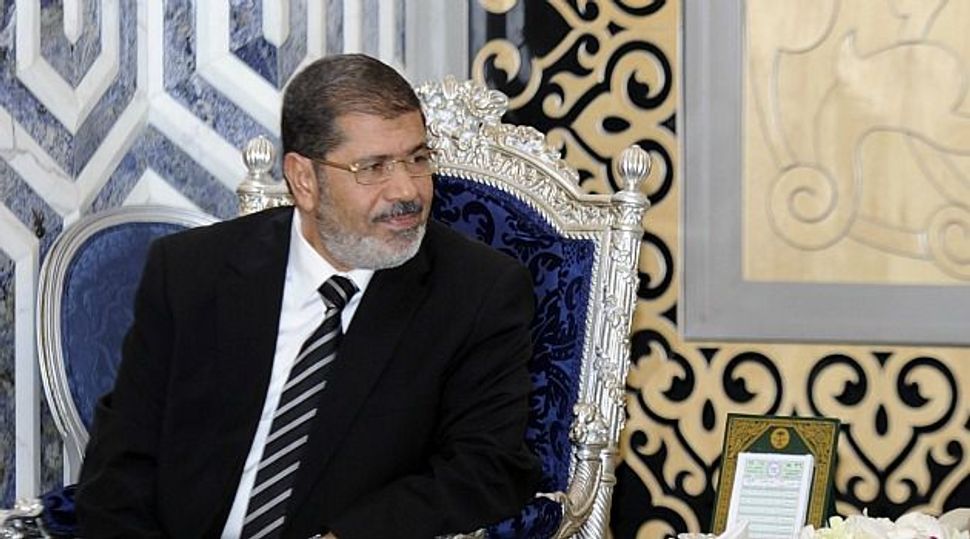 The U.S. government on Tuesday strongly condemned disparaging comments about Jews that Egyptian President Mohamed Mursi was reported to have made almost three years ago when he was a Muslim Brotherhood leader, and urged him to repudiate his remarks.

White House spokesman Jay Carney told reporters that the language Mursi used was “deeply offensive” and that U.S. officials had raised concerns with the Egyptian government on the matter.

Mursi was an Islamist political leader in 2010 when, according to a video obtained by the New York Times, he urged Egyptians to “nurse our children and our grandchildren on hatred” for Jews and Zionists. In a television interview months later, he described Zionists as “these bloodsuckers who attack the Palestinians, these warmongers, the descendants of apes and pigs,” the newspaper said.

“We completely reject these statements, as we do any language that espouses religious hatred,” Carney said when asked about Mursi’s comments at the White House daily briefing.

Carney called on Mursi, elected in June after a popular uprising that ousted Egypt’s longtime ruler Hosni Mubarak, to “make clear that he respects people of all faiths and that this type of rhetoric is not acceptable or productive in a democratic Egypt.”

He noted, however, that Mursi, as president, had worked with the Obama administration to help broker an Israeli-Hamas ceasefire in Gaza late last year and had promised to uphold Egypt’s peace treaty with Israel.

Controversy surrounding Mursi’s slurs against Jews could stoke diplomatic tensions with Washington at a time when his fledgling government has sought to strike a moderate tone toward the West and win further international aid for its ailing economy.

Obama had originally been wary of Mursi’s Muslim Brotherhood roots. But the two leaders forged a constructive relationship in a round of telephone calls that ultimately led to Egypt’s role in quelling the crisis in Gaza.