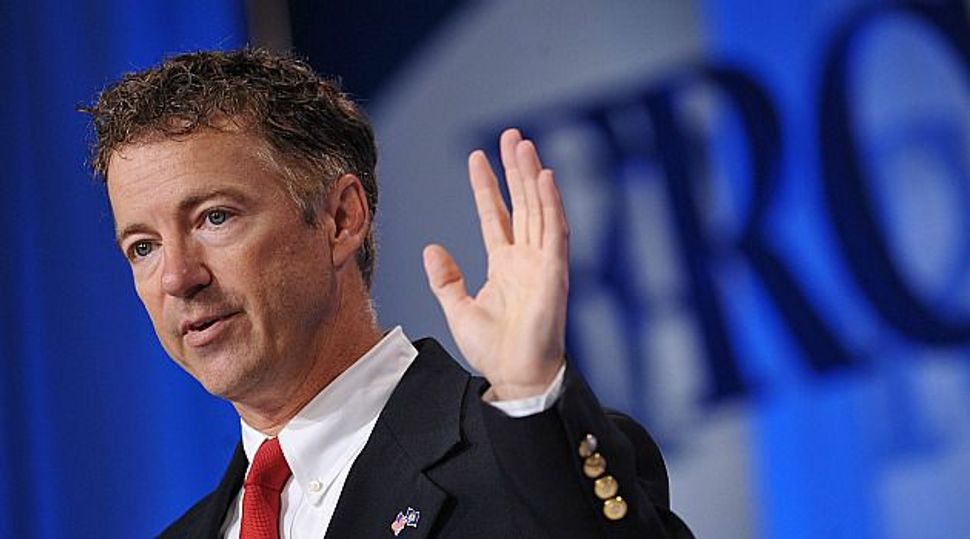 Sen. Rand Paul (R-Ky.) said he does not favor immediate cuts to defense assistance to Israel and favors intelligence and development cooperation, but he believes that Israel would ultimately benefit from economic independence from the United States.

Paul, in a conference call Wednesday marking his return from a week-long visit to Israel, said his first priority in targeting foreign assistance would be those nations where people “burn the American flag and say death to America.”

Israel, he said, has been a “great friend” to the United States.

“Something I would be in favor of would not be immediate, dramatic or draconian, it would be evolving,” he said of his favoring cuts in assistance to Israel. “I’m for an independent, strong Israel that is not a client state and not a reliant state.”

Asked particularly about missile defense cooperation, he said there was a “great argument” for such programs and he believes that American cities should have missile defense infrastructure.

Of Iron Dome, the Israeli anti-missile system that Israel says repelled 80 percent of rocket attacks during the recent Gaza War, Rand said: “There’s a great argument for the Iron Dome,” although he would want to examine “exactly how it is funded.”

Currently, Iron Dome is funded by hundreds of millions of dollars in grants on top of the $3 billion Israel receives annually in defense assistance from the United States.

Paul said he understands how his calls for reducing aid to Israel make him an outlier among fellow senators, but that he believes his position is more pro-Israel than theirs.

Paul also said it was “presumptuous” of American politicians to dictate to Israel where it should build, and that he leans toward recognition of Jerusalem as Israel’s capital, although he understands arguments that such recognition could be “provocative.”

Paul, who met with Israeli leaders including Prime Minister Benjamin Netanyahu during his trip, said he was concerned about defense assistance to Egypt, in part because its president, Mohamed Morsi, has in the past made anti-Semitic remarks, but also because such sales fuel an arms race with Israel.

Paul has gently distanced himself from the positions of his father, Rep. Ron Paul (R-Texas), a perennial presidential candidate who also has favored cutting assistance to Israel, but who has often cast those arguments as criticism of Israeli policies. The younger Paul is seen as likely to bid for the Republican presidential nomination in 2016.