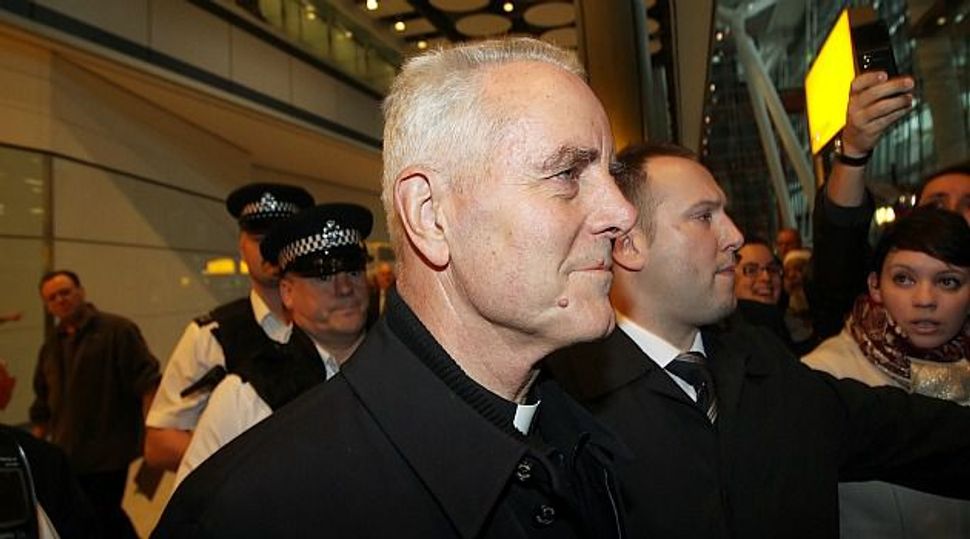 A radical British Catholic priest has been fined in Germany on charges of Holocaust denial, which is illegal in the country.

The $2,400 fine against British Bishop Richard Williamson, 72, stems from an interview he gave in 2008 to the Swedish SVT broadcaster, in which he called the murder of Jews in gas chambers during the Holocaust “lies, lies, lies.”

Williamson’s attorney is protesting the sentence, according to German news reports. It is the second attempt at prosecution: In 2010, the bishop was found guilty of incitement to hate and fined about $14,000. But a higher court set aside the verdict because the lower court had failed to say when and how the offending remarks were broadcast.

This time the court – in explaining its decision, noted that Williams’ statements “were not spontaneous,” but rather were “well-thought-out answers to the questions posed in front of the camera,” and that he clearly knew they would be broadcast, according to German media reports.

In the interview, conducted in Regensburg, Germany, broadcast on Swedish TV, and seen on the Internet as well, Williamson allegedly denied that any Jews were murdered in gas chambers during the Holocaust and insisted that not more than 300,000 European Jews were killed in total.

His attorneys reportedly told the court that Williamson’s statements were not punishable in Sweden or in England, and he should not be held responsible if they were accessible in Germany as well.

The case was especially controversial because the Catholic Church at around the time of the broadcast had reversed the excommunication of Williams and other bishops from the Catholic breakaway sect Pius Brotherhood.

Williamson, who reportedly lives in London, is no longer a member of the Pius sect; he was expelled in 2012 for “refusing to show due respect and obedience to his lawful superiors,” according to the sect’s website.