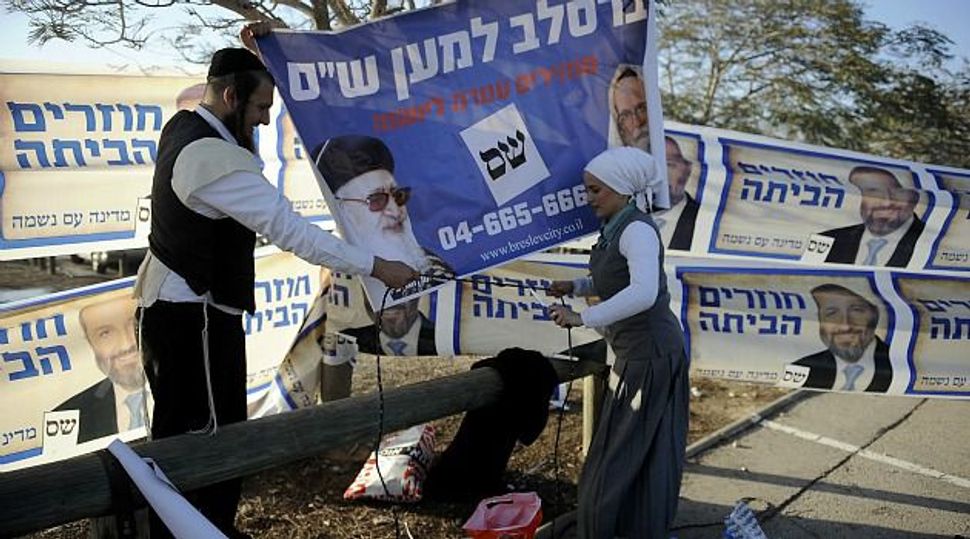 Big Jump: Ultra-Orthodox Israelis campaign in upcoming election. Polls show a sharp jump in the number of devoutly religious lawmakers who will win seats in the Knesset. Image by getty images

The image captured a sea change in Israeli politics.

Orthodox Jews have left niche parties to join Likud and other mainstream factions, challenging the dominance of non-observant politicians and infusing Israeli politics with religious fervour and a harder line on the Palestinian conflict.

Opinion polls predict that religious politicians will end up with a record 40 of parliament’s 120 seats after Tuesday’s vote, compared with 25 in the outgoing assembly elected in 2009. Two decades ago only a score of lawmakers were religiously Orthodox.

While some Israelis rejoice, some in the secular majority fear the trend may alter the identity of a nation which has never marked out the troublesome boundaries between religion and state – and which also has a substantial Arab Muslim minority.

Many foresee renewed disputes over the “Jewishness” and the conversion of immigrants.

Others fret about further attempts by hardcore members of pro-settler parties such as Likud and the even harder line Bayit Yehudi (Jewish Home) group to rein in Israel’s secular-minded high court, restrict civil liberties and step up monitoring of foreign funding for human rights and other groups.

“In the long run I see a weakening of the foundations of the state’s democracy,” said Israeli sociologist Batia Siebzehner of the Hebrew University of Jerusalem, citing the track record of Orthodox politicians urging the state to embrace religious law.

That prospect horrifies secular Israelis, who do not relish comparisons with Iran, an avowedly Islamic republic, or Arab states where Islamist factions are gaining ground.

David Stav, a moderate Orthodox rabbi running for chief rabbi in a poll later this year, says such fears are overblown.

“This is not going to be a theocracy,” he told Reuters. Most religious politicians are “committed to a Jewish and democratic state and don’t want to see themselves as coercive to others”.

Nevertheless, centrist as well as right-wing parties are fielding religious candidates. Netanyahu has made a point of having himself photographed with skullcap-wearing voters.

A rabbi has joined ex-television star Yair Lapid’s centrist list. Former Foreign Minister Tzipi Livni has tapped an ex-general who wears a skullcap for her centrist party as well.

In past elections, Orthodox politicians mainly represented smaller parties focused on religious issues. Their integration into larger parties is helping them to gain more seats in parliament, although Orthodox Israelis are still a minority.

A survey by the Jerusalem-based Israel Democracy Institute found last year that 22 percent of Israeli Jews were observant, including the ultra-Orthodox and more moderately Orthodox, far outnumbered by the 78 percent who were non-observant.

Yet they may exert a disproportionate influence.

Religious movements seeking to expand Jewish settlements in the Israeli-occupied West Bank and deny the Palestinians a state are supplanting once-powerful kibbutzniks as symbols of Israel’s self-declared national mission, many experts say.

The kibbutz, the collective farm movement identified with Israel’s early settlement of the land, long dominated military and political leadership, despite its relatively small numbers. Pollsters say the kibbutz movement may win no seats next week.

“The ideological tables have turned and religious Zionists are taking over the national discourse,” said Tamar El Or, a Hebrew University anthropologist, adding that the trend was not new, but was now translating into influence in parliament.

The rise of religiously fired Jewish settlers has coincided with widespread Israeli disillusion with failed negotiations with the Palestinians, compounded in the last two years by Arab uprisings that have brought Islamists to power, especially in Egypt, making its 1979 peace treaty with Israel look fragile.

A more religiously-tinged parliament could lead to a “rise in racism, separatism (and) less democracy,” El Or said.

“It will become more difficult to be a citizen in this country if you’re an immigrant, not Jewish and certainly if you’re an Arab,” she added, referring to Israeli Arabs who hold citizenship and make up a fifth of the population, but who complain of discrimination.

For now, Orthodox lawmakers may focus more on promoting Jewish settlements than on trying to enforce religious law, an enterprise that might swiftly anger the secular majority.

“If they get drunk on their power or try to push a religious agenda, they may find themselves facing a backlash,” said Gideon Rahat, a political scientist at the Israel Democracy Institute.

Some in the more liberal Orthodox camp want to heal rifts with non-observant Israelis, especially on the conversion issue – the Orthodox rabbinate does not recognise many immigrants as Jews or the right of more liberal rabbis to convert them.

Stav forecast “catastrophe” for Israel if the row dragged on because it would deter immigrants and handicap Jews in any demographic race with Arabs. “We won’t survive here,” he said.

Likud lawmaker Tzipi Hotovely, a pro-settler candidate, said her fellow-Orthodox MPs should focus on security issues and on rejecting pressure to relinquish to the Palestinians “Biblical” land captured by Israel in the 1967 Middle East war.

“Our job is to lead a world view of Jewish identity and to preserve the Land of Israel,” she said. “We need to aim for meaningful influence, and not be content with supervising Jewish dietary laws.”

At Netanyahu’s Likud meeting, the Orthodox worshippers in knitted skullcaps and prayer vests with white fringes dangling below their shirts, rocked and muttered their afternoon prayers, as their non-observant colleagues waited in patient silence.

They were putting a new complexion on the expression party faithful – and perhaps on Israeli politics.