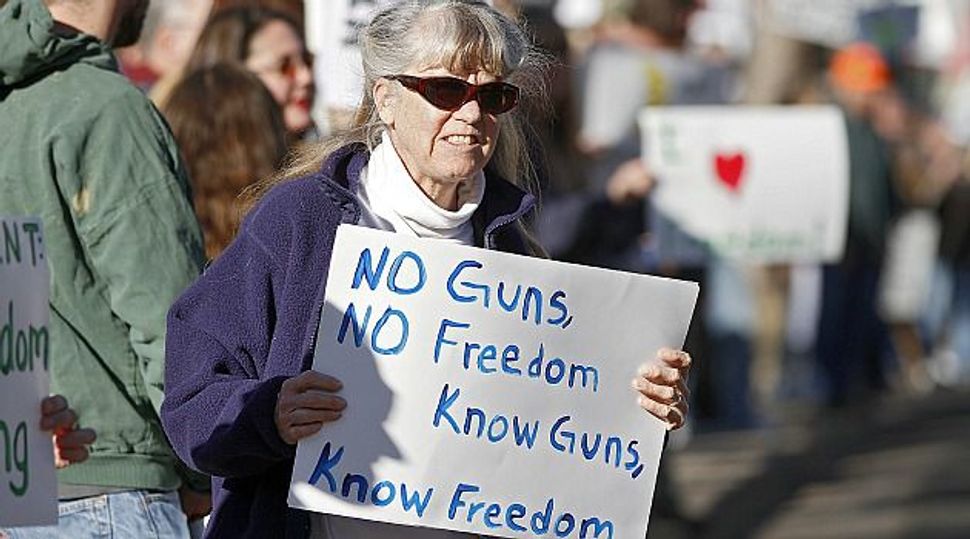 High Noon: Pro-gun groups rallied across the nation to push back against President Obama?s proposals, which they say will limit important rights. Image by getty images

Pro-gun activists who say the right to own firearms is under attack from President Barack Obama’s proposals to reduce gun violence held “high noon” rallies across the United States on Saturday in support of gun ownership rights.

The U.S. debate over gun control flared in mid-December when a man armed with an assault rifle killed 20 first-graders and six adults at an elementary school in Newtown, Connecticut – the deadliest of a string of U.S. shooting sprees last year.

“We are law-abiding citizens, business owners, military, and we are not going to be responsible for other people’s criminal actions,” former Marine Damon Locke said to applause at a Florida rally he had helped organize.

Some in the crowd of about 1,000 in Brooksville, about an hour north of Tampa, hoisted signs that said “Stop the Gun Grabbers” and “Gun control isn’t about guns, it’s about control.”

Obama and gun control advocates have begun a push to reinstitute a ban on assault weapons in the wake of the Connecticut school massacre. A number of other states have taken up gun legislation, and New York, which has among the strictest gun control laws in the country, broadened its assault weapons ban on Tuesday.

“Until we enforce gun laws on the books against the bad guys, I think it’s hypocritical to discuss more laws against law-abiding citizens,” Gary Schraut, a Brooksville real estate agent, told Reuters.

Across the country at a rally in Denver, the mood was defiant as about 500 people, including families with children, gathered in unseasonably warm weather outside the state capitol.

“I have earned the right to have my guns,” said Don Dobyns, an Air Force veteran and former police officer from Colorado Springs, who was among the rally organizers.

Sporting a shirt that read, “Girls with guns,” 31-year-old Jennifer Burk said: “My parents didn’t raise a victim and the government shouldn’t try and make me one.”

Gun control advocates say U.S. civilians have no justifiable need for assault weapons or high-capacity magazines, and they say more background checks will help keep guns out of the hands of criminals.

The reaction has been fierce from gun supporters such as the National Rifle Association, who point to a right to bear arms that is enshrined in the Second Amendment to the U.S. Constitution and which they do not want to see watered down.

Saturday’s rallies were organized by Guns Across America, a group launched by Texas airline pilot Eric Reed, who has said that after he heard Obama talk about gun control on the day of the Connecticut massacre he thought gun owners should send a strong message to lawmakers in Washington.

As of Saturday afternoon, the Facebook page for Guns Across America listed more than 20,000 people saying they intended to attend events planned mostly in state capitals. Local media reported hundreds of people gathered at rallies nationwide, from Kentucky to Oregon to Michigan and Pennsylvania.

Gun-control advocates on Sunday plan to hold a National Gun Prevention Sabbath, where they say 150 houses of worship will call on the faithful to advocate for an “actionable plan to prevent gun violence.”

People who have lost loved ones to gun violence will display their photographs, organizers said.