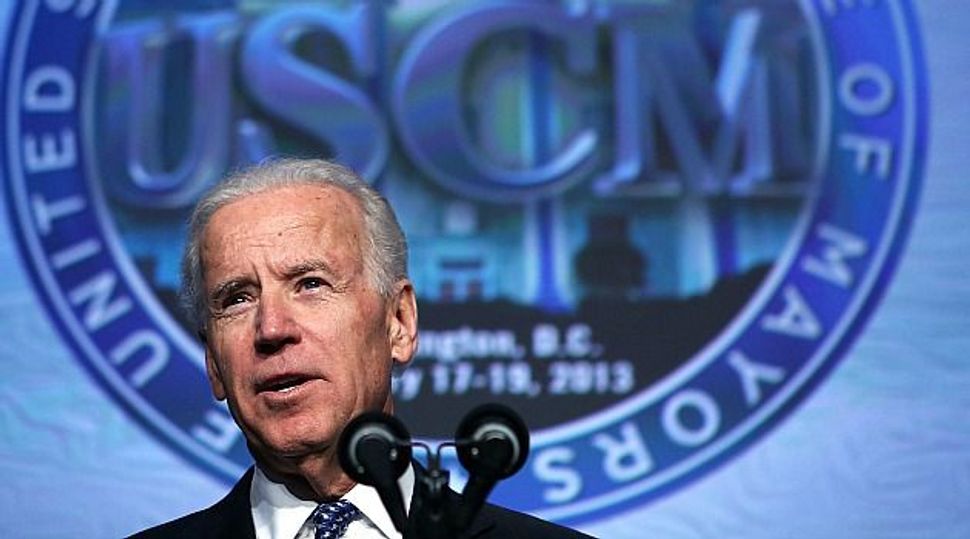 Joe?s Slip Shows : Vice President told a group of Iowans that he was proud to ?be President.? Did the famously gaffe-prone veep just slip up or is there more to it than that? Image by getty images

Was it just another slip of the tongue by Vice President Joe Biden, or a preview of the next presidential campaign in 2016?

Hours before he and President Barack Obama were due to be sworn in for their second four-year terms, Biden told supporters at the Iowa State Society inauguration ball late Saturday: “I’m proud to be president of the United States.”

The audience laughed and then cheered. Biden’s son Beau, Delaware’s attorney general, interrupted his father and told the crowd he had misspoken.

Although Biden will be a few days short of his 74th birthday on the next election day in 2016, he has hinted he is considering a run for president.

Biden’s unannounced appearance at the “First in the Nation” ball in Washington was not too surprising.

The state was a key to the Obama-Biden team’s victory over Republicans Mitt Romney and Paul Ryan in the Nov. 6 election.

And because Iowa is an early battleground in the state-by-state process that determines the political parties’ candidates for president, any big party thrown by state officials this weekend was virtually certain to draw at least one or two potential contenders for the White House in 2016.

Biden, known for the occasional gaffe on the campaign trail, corrected himself, and returned to a favorite line from the fall campaign.

He went on to say he had dropped by to thank Iowans for supporting the Democratic ticket in the election.

“I came to say thank you,” Biden told those gathered at the National Museum of Women in the Arts, a short walk from the White House. “Just simply thank you.”

Showing appreciation to Iowa, an industrial and farm state that is home to 3 million people, is an expected courtesy in national politics because of the state’s role in separating contenders from pretenders in each presidential race.

In early 2008, the results in the Iowa caucuses convinced many Democrats the Obama could win the Democratic nomination over former first lady Hillary Rodham Clinton, now Obama’s secretary of state.

Next to Clinton, Biden is widely seen as being at the front of the ranks of potential Democratic contenders in 2016.

Also in the crowd at the Iowa party was Maryland’s Democratic governor, Martin O’Malley.

He was a frequent surrogate for Obama in 2012 and is also seen by many Democrats as a potential contender for president – meaning he could be spending a lot of time with Iowans during the next three years.

Earlier, O’Malley made his way through a V.I.P. room where there were cocktails made with Templeton Rye, an Iowa spirit. He chose beer. He had three more stops to go Saturday night.

“I have campaigned in Iowa before,” O’Malley said, referring to his work on behalf of other Democratic candidates. “I have great affection for Iowa.”

This summer Iowa Senator Tom Harkin, a Democrat, invited O’Malley to his annual steak fry, a traditional trek for Democrats in need of an Iowa introduction.