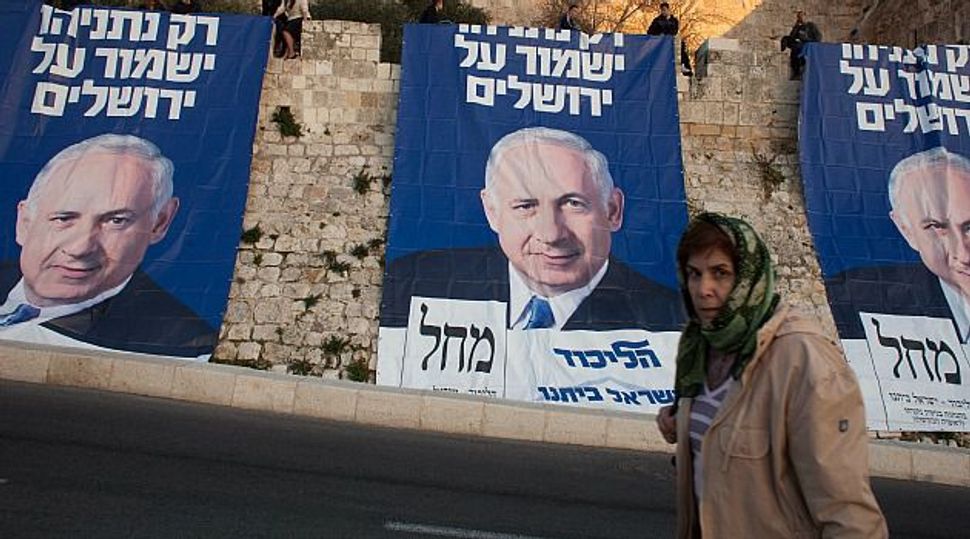 Israeli Prime Minister Benjamin Netanyahu made an election-eve appeal on Monday to wavering supporters to “come home”, showing concern over a forecast far-right surge that would keep him in power but weaken him politically.

In the last stretch of a largely lacklustre campaign that could produce the most hardline government in Israel’s history, Netanyahu has watched high-tech millionaire Naftali Bennett’s far-right Jewish Home party chip away at his right-wing Likud’s opinion poll lead.

At a final campaign appearance in Jerusalem, Netanyahu voiced confidence his traditional backers would not abandon him, and repeated his stump pledges to keep Israel safe and build Jewish settlements over international opposition.

“I have no doubt that many, many people will decide at the last minute to come home to Likud-Yisrael Beitenu,” said Netanyahu, who polls predict will still win Tuesday’s parliamentary election, albeit by a narrower margin than first forecast.

“I have a good feeling. And at the last minute, I appeal to each and every citizen going to the ballot box: ‘Decide for whom you are going to vote – for a divided and weak Israel or for a united and strong Israel and a large governing party?’.”

But the surveys indicated his support had dipped to its lowest point so far and forecast that a potential right-wing and religious bloc of parties led by Likud-Yisrael Beitenu would have a slim parliamentary majority of 63 out of 120 seats.

If the polls are correct – and they have been famously inaccurate in several past elections – Likud and Yisrael Beitenu would capture 10 seats fewer than they took in the previous national ballot in 2009.

A relatively weak showing would make Netanyahu, who has pledged during the campaign to pursue settlement building in the occupied West Bank, more susceptible to the demands of potential coalition partners, including Bennett, and religious parties.

Bennett, a charismatic former settler leader, advocates annexing parts of the West Bank, territory Israel captured along with East Jerusalem, the Gaza Strip and the Golan Heights, in the 1967 war, a position to the right of Netanyahu.

Jewish Home has been the surprise start-up party of the election, forecast to win some 14 seats in a third-place finish.

Second place, according to the polls, will go to the centre-left Labour Party led by Shelly Yachimovich, a former journalist who has focused on economic and social issues in the campaign and has ruled out joining a Netanyahu-led government.

Although support for centre-left parties has edged higher, their leaders failed to present a united front or persuade many Israelis, alarmed by turmoil in neighbouring Arab states, they are ready to take charge of the country.

Bennett’s surge has been the talking point of the election, but for voters who have cast ballots for Netanyahu in the past, the Jewish Home leader has a familiar pedigree.

Both are former army commandos and speak American-accented English: Netanyahu went to high school and college in the United States, Bennett’s parents immigrated from San Francisco. And each has put settlement expansion at the core of his campaign.

Bennett has made no secret of his desire to join a Netanyahu-led coalition, to the point of plastering the country with campaign ads featuring photos of both leaders.

While Netanyahu still advocates creation of a “demilitarised” Palestinian state, an alliance with Jewish Home would steer his government further to right, potentially putting further strain on his relations with U.S. President Barack Obama and deepening Israel’s international isolation.

Netanyahu has campaigned largely on security issues, shrugging off as misplaced international opposition to settlement building that most countries view as illegal and which he sees as a Jewish right based on the Bible and history.

A splintered centre-left bloc, whose parties hope to win a majority but may also join a Netanyahu-led government, has had trouble finding a joint message in opposition.

Yachimovich, whose Labour party is forecast to win about 18 seats, has focused on high living costs and economic woes, hoping to translate mass social protests from two years ago into an election victory.

Tzipi Livni, a former foreign minister and negotiator with the Palestinians, has promised to work for a regional peace deal. Her Hatnuah party is expected to win fewer than 10 seats.

In the final hours of the campaign, Netanyahu also took new aim at pocketbook issues, after being rocked by figures last week that showed Israel’s budget deficit last year was, at 4.2 percent of gross domestic product, double the original estimate.

He announced he would appoint Moshe Kahlon, who as his widely popular communications minister brought down the price of mobile telephone services, to oversee state land allocation – with the aim of lowering housing prices.

No one party has ever won a parliamentary majority in Israel, and its president traditionally asks the leader of the biggest bloc to try to form a governing coalition, a process likely to stretch into next month.