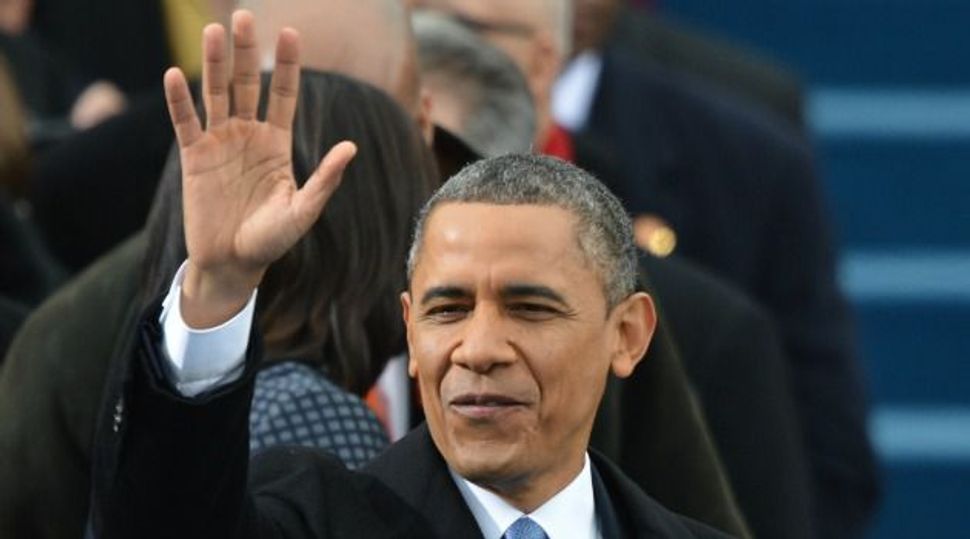 President Barack Obama urged Americans on Monday to reject political “absolutism” and partisan rancor, as he kicked off his second term with an impassioned call for collective action and estabished a more assertive tone for the challenges he faces over the next four years.

Obama’s ceremonial swearing-in at the U.S. Capitol was filled with traditional pomp and pageantry, but it was a scaled-back inauguration compared to the historic start of his presidency in 2009 when he swept into office on a mantle of hope and change as America’s first black president

Despite expectations tempered by lingering economic weakness and a divided Washington, Obama delivered a confident listing of his second-term plans for the battles he intends to fight, including over climate change, immigration reform and gay rights.

“We cannot mistake absolutism for principle, or substitute spectacle for politics, or treat name-calling as reasoned debate,” Obama said as he stood in the wintry cold atop a giant makeshift platform on the Capitol steps overlooking the National Mall. “We must act, knowing that today’s victories will be only partial.”

Looking out on a sea of flags, Obama spoke to a crowd of up to 700,000 people – less than half the record 1.8 million who assembled four years ago.

Obama, speaking in more specific terms than expected, promised “hard choices” to reduce the federal deficit and called for a revamping of the tax code and a remaking of government.

The Democrat arrived at his second inauguration on solid footing, with his poll numbers up, Republicans on the defensive and his first-term record boasting accomplishments such as a U.S. healthcare overhaul, ending the war in Iraq and the killing of Osama bin Laden.

But fights are looming over budgets, gun control and immigration, with Republicans ready to oppose him at almost every turn and Obama still seemingly at a loss over how to engage them in deal-making.

When Obama raised his right hand and was sworn in by Chief Justice John Roberts, it was his second time taking the oath in 24 hours – but this time with tens of millions of people watching on television.

The president beamed as chants of “Obama, Obama!” rang out from the crowd.

Obama had a formal swearing-in on Sunday at the White House because of a constitutional requirement that the president take the oath on Jan. 20. Rather than stage the full inauguration on a Sunday, the main public events were put off until Monday.

It was another milestone of political passage for Obama, the Hawaiian-born son of a black father from Kenya and a white mother from Kansas. An electrifying speech at the 2004 Democratic convention as a little-known Illinois state legislator lifted him to the national stage, putting him on a rapid trajectory to the U.S. Senate and a few years later the White House.

Obama, 51, his hair visibly grayed over the past four years, sought to reassure Americans at the mid-point of his presidency and encourage them to help him take care of unfinished business.

Obama, who won a second term by defeating Republican Mitt Romney after a bitter campaign, opened round two facing many of the same problems that dogged his first term: persistently high unemployment, crushing government debt and a deep partisan divide. The war in Afghanistan, which Obama is winding down, has dragged on for over a decade.

He won an end-of-year fiscal battle against Republicans, whose poll numbers have continued to sag, and appears to have gotten them to back down, at least temporarily, from resisting an increase in the national debt ceiling.

And Obama faces a less-dire outlook than he did when he took office in 2009 at the height of a deep recession and world economic crisis. The economy is growing again, though slowly.

His call for political compromise contrasted with the more combative approach he has taken with Republicans on a range of volatile issues since winning re-election in November.

While there was no sign that Obama was returning to the more accommodating style that marked much of his first term, it appeared to be a signal to Republicans, who control the House of Representatives, that he is still open to finding common ground.

Nevertheless, Obama’s appeals for bipartisan cooperation will remind many Americans of his own failure to meet a key promise when he came to power – – to act as a transformational leader who would fix a dysfunctional Washington.

Even though his second inauguration was more subdued than the first, the crowds that turned out on the National Mall made up for their lesser numbers with an abundance of enthusiasm.

“We’re a bit surprised by how few people are out here this morning. But that’s fine – makes the crowds more manageable. The weather is delightful and we’re happy to be here,” said Kathy Reid, 61, from Waco, Texas.

He took the oath with his hand on two Bibles – one from President Abraham Lincoln, who ended slavery, and the other from King. Myrlie Evers-Williams, widow of slain civil rights figure Medgar Evers, was given the honor of delivering the invocation at the ceremony.