Palestinians See No Hope for Peace as Israel Votes 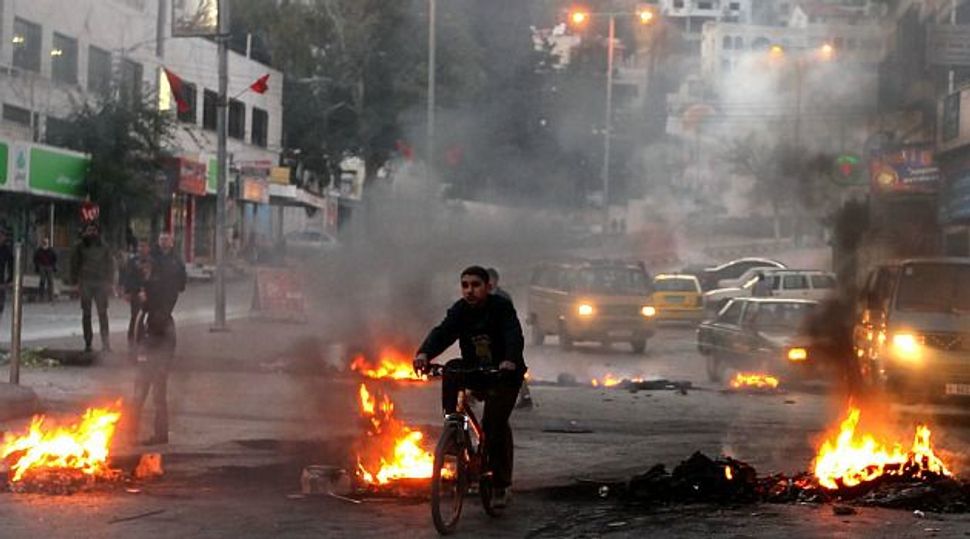 Right and Right-er: Palestinians were more concerned about local issues, like a prisoner dispute that sparked this West Bank protest, than the results of Israel?s election. Image by getty images

Palestinians expressed weary indifference on Tuesday as Israelis voted in an election set to produce a hardline government keener to expand Jewish settlements on occupied land than seek peace.

“Regardless of who wins, the result is the same: Israelis want this land but not the people,” said Ahmed Amro, a professor at Al-Quds Open University in Ramallah, the West Bank’s capital.

“The Palestinians should have a plan to face this situation we’re in, and not put much stock in who wins,” he said of the four million people under Israeli occupation or blockade.

Israel has occupied the West Bank since capturing it in the 1967 Middle East War, along with east Jerusalem, the Gaza Strip and the Golan Heights. Gaza has remained under tight curbs on movement since Israeli soldiers and settlers withdrew in 2005.

Opinion polls predict that Israeli Prime Minister Benjamin Netanyahu will return to power at the head of a coalition dominated by hardline religious and nationalist pro-settler parties which give short shrift to U.S.-backed peace efforts.

“But all indications say Netanyahu will win, and this will be a big disaster,” he said.

Direct peace talks between Israel and the Palestinians broke down in 2010 over the building of settlements in the West Bank, which Palestinians say deny them a viable future state.

Palestinians themselves have struggled to elect a national government that present a united front against Israel’s policies and further their decades-long quest for independence.

Parliamentary polls in 2006 gave the Islamist Hamas group a surprise win, shocking Israel and Western countries who consider it a terrorist organisation, and leading to a brief civil war with its secular Fatah rivals in Gaza the following year.

Entrenched in Gaza, Hamas has not allowed elections in six years and expelled an election committee meant to pave the way for new polls as part of a stalled unity plan in 2012.

Fatah held local polls in the West Bank which Hamas boycotted, leading to a disappointing turnout.

Palestinian President Mahmoud Abbas, who is also Fatah’s leader, has outstayed his term by three years since he was elected in 2005.

Hamas rejects Israel’s right to exist and opposes U.S.-sponsored negotiations, advocating armed struggle instead. Abbas has put his faith in diplomacy, but neither strategy has brought Palestinians much closer to achieving their national aspirations.

Asked of their hopes for Israel’s polls, three grocers in a Ramallah store all mumbled: “What does it matter?”

“Me, I care what happens on the street here in Palestine, and I don’t like what Hamas does. I vote yellow, I vote for the keffiyeh,” he said, pointing to his black-and-white chequered scarf, a symbol of Fatah along with its trademark colour.

“You’re being a bit partisan,” his bearded colleague said.

Palestinians See No Hope for Peace as Israel Votes