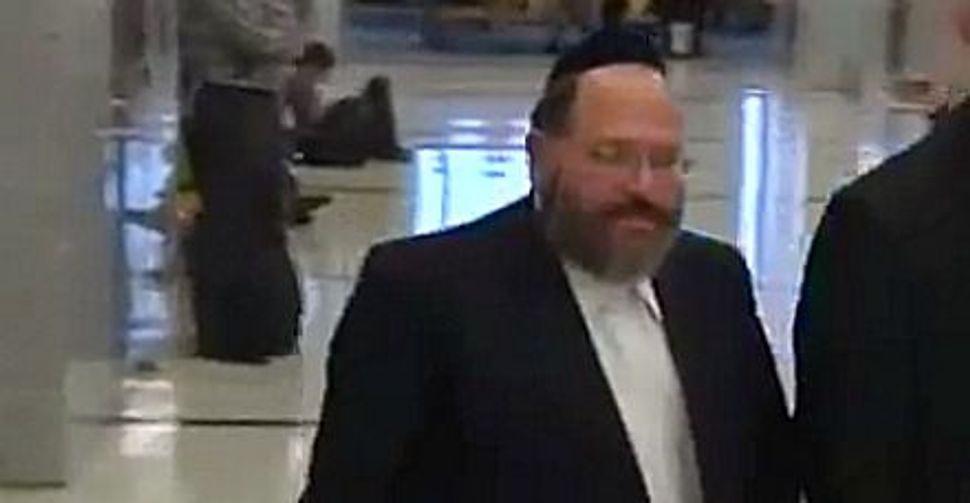 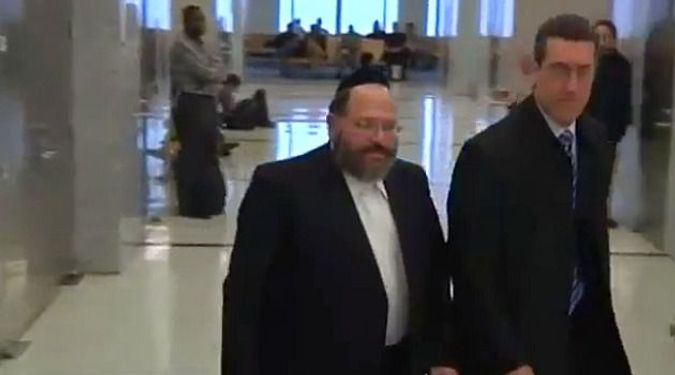 Nechemya Weberman walks out of court. The Hasidic ?therapist? was sentenced to more than a century behind bars for abusing a young girl. Image by youtube

An ultra-Orthodox Jewish counselor was sentenced to 103 years in prison on Tuesday for sexually abusing a young female patient over three years in the insular Brooklyn community where they lived.

Nechemya Weberman, who was convicted last month of sexual conduct against a child, criminal sexual acts, sexual abuse and endangering the welfare of a child, faced up to 117 years behind bars at his sentencing.

Now 18 years old and married, the victim was 12 years old when her parents sent her to Weberman, an unlicensed therapist, for religious counseling. From 2007 to 2010, Weberman sexually abused the girl multiple times, mostly in his office, prosecutors said.

“I would cry until my tears ran dry,” said the victim, her voice shaking with emotion as she read a statement at the sentencing in state Supreme Court in Brooklyn.

“I saw a girl who had no reason to live … a girl who wanted to live a normal life but instead was being victimized by a 50-year-old man who forced her to perform sickening acts again and again,” she said.

After the sentencing, the victim’s husband fought back tears as he spoke to reporters.

“My wife is relieved that the children in our community will be safe,” the husband said, his lower lip trembling as he struggled to maintain his composure. “We hope this sends a message of support to other victims of abusers that their voices will be heard.”

He said his wife’s decision to come forward was a difficult one and that they were still receiving threats from members of their community.

“The abuse of a child cannot be swept under the rug or dealt with by insular groups believing only they know what is best for their community,” Brooklyn District Attorney Charles Hynes said.

“In this case it took the courage of a young woman to drive home the point that justice can only be achieved through the involvement of civil authorities charged with protecting all the people,” Hynes said.

Kevin O’Donnell, a prosecutor in Hynes’ office, said he and colleagues had learned of about 10 women who claimed they were sexually abused by Weberman, either as children or as adults. The allegations were too old under the statute of limitations to be prosecuted, except in one case in which the woman was still undecided whether she wished to proceed with her complaint.

The Hasidic community has a longtime practice of addressing sex abuse accusations internally, critics say sometimes by ignoring them or intimidating victims into silence.

In 2009, Hynes created a program called Kol Tzedek – Hebrew for Voice of Justice – to help victims of sexual abuse in Brooklyn’s ultra-Orthodox Jewish communities to come forward, including a dedicated confidential hotline. There have been 112 arrests and there are about 50 cases pending as a result of the program, according to Hynes’ office.

Weberman’s trial was marred by accusations of witness intimidation. At one point, four men were arrested on charges of photographing the victim in court, then posting her image on Twitter. Their cases are pending. The identity of victims in sex abuse cases is typically protected.

Outside the courtroom, Weberman’s attorney, George Farkas, said his client was innocent and they would continue to appeal.

“We look forward to the man being exonerated,” Farkas said. “We honestly and truly and fully believe this was a set-up.”