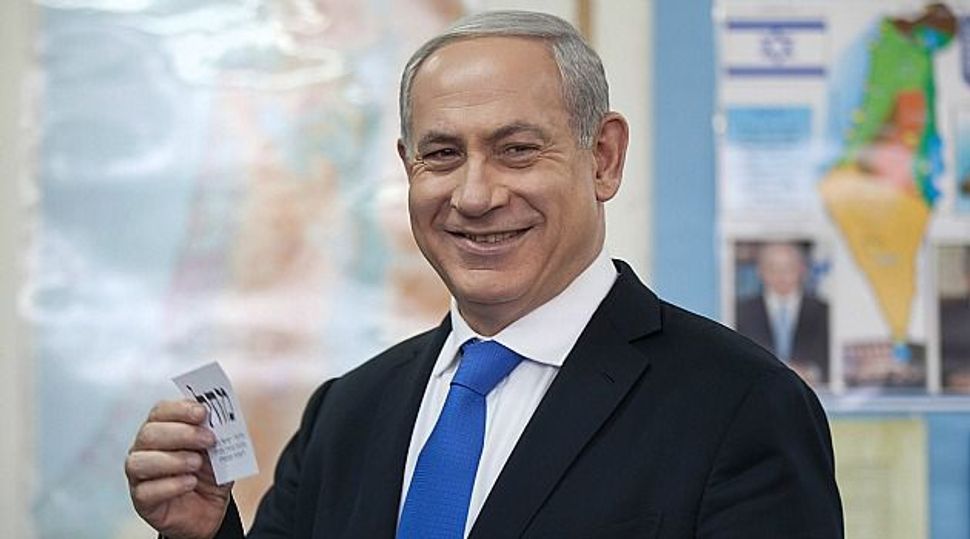 Start Sweating: Benjamin Netanyahu had been expecting a coronation. Instead he got a dogfight. Image by getty images

Exit polls showed the Israeli leader’s Likud party, yoked with the ultra-nationalist Yisrael Beitenu group, would still be the biggest bloc in the 120-member assembly with 31 seats, 11 fewer than the 42 they held in the previous parliament.

If the exit polls compiled by three local broadcasters prove correct – and they normally do in Israel – Netanyahu would be on course for a third term in office, perhaps leading a hardline coalition that would promote Jewish settlement on occupied land.

But his weakened showing in an election he himself called earlier than necessary could complicate the struggle to forge an alliance with a stable majority in parliament.

The 63-year-old Israeli leader promised during his election campaign to focus on tackling Iran’s nuclear ambitions if he won, shunting Palestinian peacemaking well down the agenda despite Western concern to keep the quest for a solution alive.

The projections showed right-wing parties with a combined strength of 61-62 seats against 58-59 for the centre-left.

“According to the exit poll results, it is clear that Israel’s citizens have decided that they want me to continue in the job of prime minister of Israel and to form as broad a government as possible,” Netanyahu wrote on his Facebook page.

The centrist Yesh Atid (There is a Future) party, led by former television talk show host Yair Lapid, came second with 18 or 19 seats, exit polls showed – a stunning result for a newcomer to politics in a field of 32 contending parties.

The once dominant Labour party led by Shelly Yachimovich was projected to take third place with 17 seats.

The mood was subdued at Netanyahu’s Likud party election headquarters after the polls closed, with only a few hundred supporters in a venue that could house thousands.

“We anticipated we would lose some votes to Lapid, but not to this extent. This was a Yesh Atid sweep,” Likud campaign adviser Ronen Moshe told Reuters.

A prominent Likud lawmaker, Danny Danon, told CNN: “We will reach out to everybody who is willing to join our government, mainly the centre party of Yair Lapid.”

If the prime minister can tempt Lapid to join a coalition, the ultra-Orthodox religious parties who often hold the balance of power in parliament might lose some of their leverage.

After a lacklustre campaign, Israelis voted in droves on a sunny winter day, registering a turnout of 66.6 percent, the highest since 1999 when Netanyahu, serving his first term as premier, was defeated by then-Labour Party leader Ehud Barak.

The strong turnout buoyed centre-left parties which had pinned their hopes on energising an army of undecided voters against Netanyahu and his nationalist-religious allies.

Opinion polls before the election had predicted an easy win for Netanyahu, although the last ones suggested he would lose some votes to the Jewish Home party, which opposes a Palestinian state and advocates annexing chunks of the occupied West Bank.

Full election results are due by Wednesday morning and official ones will be announced on Jan. 30. After that, President Shimon Peres is likely to ask Netanyahu, as leader of the biggest bloc in parliament, to try to form a government.

The former commando has traditionally looked to religious, conservative parties for backing and is widely expected to seek out self-made millionaire Naftali Bennett, who heads the Jewish Home party and stole much of the limelight during the campaign.

But Netanyahu might, as Danon suggested, try to include more moderate parties to assuage Western concerns about Israel’s increasingly hardline approach to the Palestinians.

British Foreign Secretary William Hague warned Israel on Tuesday it was losing international support, saying prospects for a two-state solution to the Israeli-Palestinian conflict were almost dead because of expanding Jewish settlements.

Netanyahu’s relations with U.S. President Barack Obama have been notably tense and Martin Indyk, a former U.S. ambassador to Israel, told the BBC the election was unlikely to change that.

“President Obama doesn’t have high expectations that there’s going to be a government in Israel committed to making peace and is capable of the kind of very difficult and painful concessions that would be needed to achieve a two-state solution,” he said.

Netanyahu has said the turbulence, which has brought Islamist governments to power in several countries long ruled by secularist autocrats, including neighbouring Egypt, shows the importance of strengthening national security.

He views Iran’s nuclear programme as a mortal threat to the Jewish state and has vowed not to let Tehran enrich enough uranium to make a single nuclear bomb – a threshold Israeli experts say could arrive as early as mid-2013.

The issue barely registered during the election campaign, with a poll in Haaretz newspaper on Friday saying 47 percent of Israelis thought social and economic issues were the most pressing concern, against just 10 percent who cited Iran.