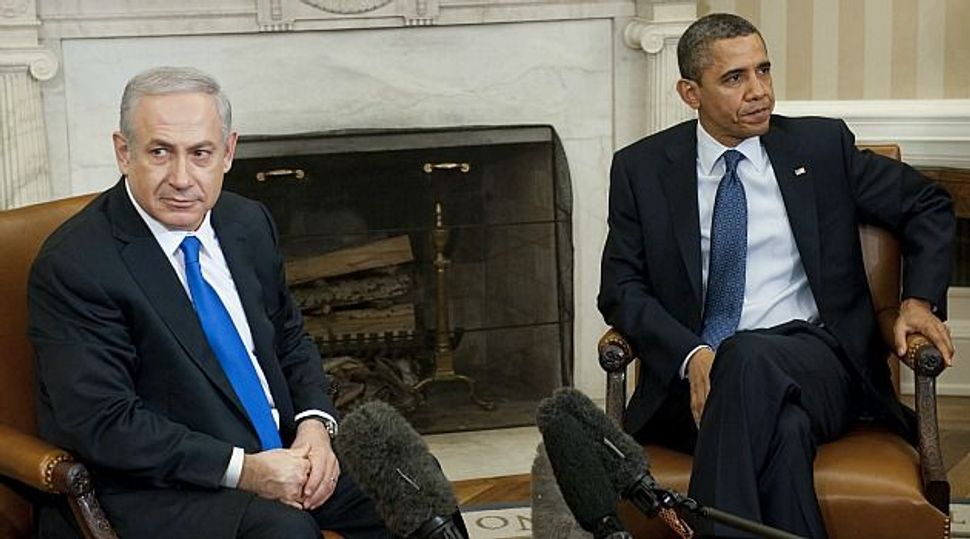 Not Happy Campers: Now that they?ve both more or less won reelection, are Benjamin Netanyahu and Barack Obama going to resolve their differences? That?s far from clear. Image by getty images

Get ready for The Barack and Bibi Show, Part Two.

With crunch-time looming in the Iranian nuclear standoff and the Israeli-Palestinian conflict still smoldering, the fractious relationship between President Barack Obama and Israeli Prime Minister Benjamin Netanyahu will be tested in coming months like never before, as both leaders move into new terms in office.

But with Obama displaying a bolder leadership style since his re-election and Netanyahu seen on the defensive after a weaker-than-expected election showing on Tuesday, the Democratic president looks set to enter the next round with his hand strengthened.

U.S. officials remain cautious as they wait to see what kind of coalition Netanyahu cobbles together.

But they are also hopeful that the surprising gains by his center-left challengers will set the stage for forming a broad-based government more in sync with Obama’s agenda, including holding off on any Israeli attack on Iran’s nuclear sites and trying to restart stalled peace talks with the Palestinians.

A more moderate Israeli coalition could lower tensions with Washington – which have been aggravated by Netanyahu’s demands for U.S. “red lines” on Iran’s nuclear program – and help ease Israel’s international isolation, deepened in response to settlement expansion plans on occupied land.

“The likelihood of a purely right-wing government has receded, along with the headaches that would cause for Obama,” said David Makovsky, an expert at the Washington Institute for Near East Policy. “So there’s a better chance for Netanyahu to find a ‘modus vivendi’ with the U.S.”

But it will not be easy. Over the past four years, Obama’s dealings with Netanyahu, who is widely known by his childhood nickname “Bibi,” have often been marked by slights, mutual suspicion and even antipathy.

The hawkish Netanyahu seemed to play up his testy relationship with Obama during the Israeli election campaign – which may have contributed to his party’s lackluster showing among voters, who historically have valued maintaining good ties with their country’s closest ally.

With 2013 widely regarded as the decisive year for curbing Iran’s nuclear program, Obama and Netanyahu now have a lot more at stake if they are unable to bridge their differences.

“These are issues that are bigger than personal matters, so there’s no doubt the United States and Israel will find a way to work together,” said Josh Block, president of The Israel Project, a leading U.S. pro-Israel group.

Obama wants more time for sanctions and diplomacy to work against Iran – which denies it is seeking nuclear weapons – but he has made clear military action is “on the table” if all else fails.

Netanyahu – who vowed on election night to keep Iran from obtaining nuclear weapons – has insisted he will stick to the red line laid down in September, when he told the United Nations that Tehran should not have enough enriched uranium to make even a single warhead. He gave a rough deadline of summer 2013.

But the tepid performance of Netanyahu’s rightist bloc at the polls, while enough to keep the prime ministership in his hands, makes it harder for him to claim a clear mandate for his hardline strategy on Iran. His Likud party and its ultranationalist Yisrael Beitenu ally took only 31 of parliament’s 120 seats, a loss of 11 seats.

On top of that, a more centrist coalition – with partners apparently more focused on bread-and-butter domestic issues – might tie Netanyahu’s hands on national security matters.

Obama made no mention of Iran or Middle East peacemaking in his inaugural address on Monday, a sharp contrast to four years earlier when those issues figured heavily in his speech.

But a source with knowledge of White House thinking said the omission should not be interpreted to mean those matters are low on Obama’s second-term priorities list.

Instead, the source said, Obama has learned from his first-term stumbles in Middle East diplomacy and has opted for a more low-key approach, at least until he has his new national security team in place.

His early efforts to broker Israeli-Palestinian peace talks fell apart amid mutual acrimony in 2010, followed by accelerated Israeli housing construction in the occupied West Bank and east Jerusalem – land the Palestinians claim for a future state.

Obama was reluctant to pressure Netanyahu during the 2012 U.S. election campaign for fear of undercutting support among Jewish voters and other pro-Israel constituencies. Now that he no longer faces re-election constraints, he may be ready to take a tougher tack despite the likelihood of drawing fire from Republicans who have questioned his commitment to Israel.

Obama’s aides signaled before and after his election win in November that the administration would probably launch another peace push in a second term. The question remains how soon that might happen and how much of a hands-on role he takes, but even then, the chances for a breakthrough look dim.

There is a growing expectation, however, that Obama will make his first presidential trip to Israel in the next year or two.

There have been a few recent bright spots in relations. Obama won praise from Israelis for helping to get Egypt to broker an Israel-Hamas ceasefire in Gaza in November and for opposing the Palestinians’ latest U.N. statehood bid.

But Obama aides have not forgotten that Netanyahu left little doubt over his preference for Mitt Romney before the president defeated his Republican challenger in last year’s U.S. election.

With Hillary Clinton stepping down soon, Obama will rely on John Kerry, a Democratic senator and foreign policy veteran nominated to replace her as secretary of State, to spearhead any major initiatives on Israel and Iran.

Netanyahu has called Kerry a personal friend and “a known supporter of Israel’s security.” But Kerry is also on record criticizing Israel’s settlement policy and is likely to be a voice of caution against unilateral military action on Iran.

Obama’s nominee for defense secretary, former Republican Senator Chuck Hagel, may be a source of deeper misgivings in Netanyahu’s camp, however.

His critics in Washington, including neoconservative thinkers, Republican colleagues and some pro-Israel groups, have accused him of being soft on Iran and not supportive enough of Israel – allegations he denies and which the White House is working hard to counter.

Any change in the Obama-Netanyahu dynamic should be clear by early March – that is when Netanyahu has traditionally addressed AIPAC, the biggest pro-Israel lobby, in Washington each year. Obama is also a regular speaker at the group’s conference.

The leaders would be expected to meet at the White House as well. But there are no guarantees. In what was widely regarded as a snub, Obama declined to see Netanyahu in September on his last U.S. visit to address the U.N. General Assembly in New York.