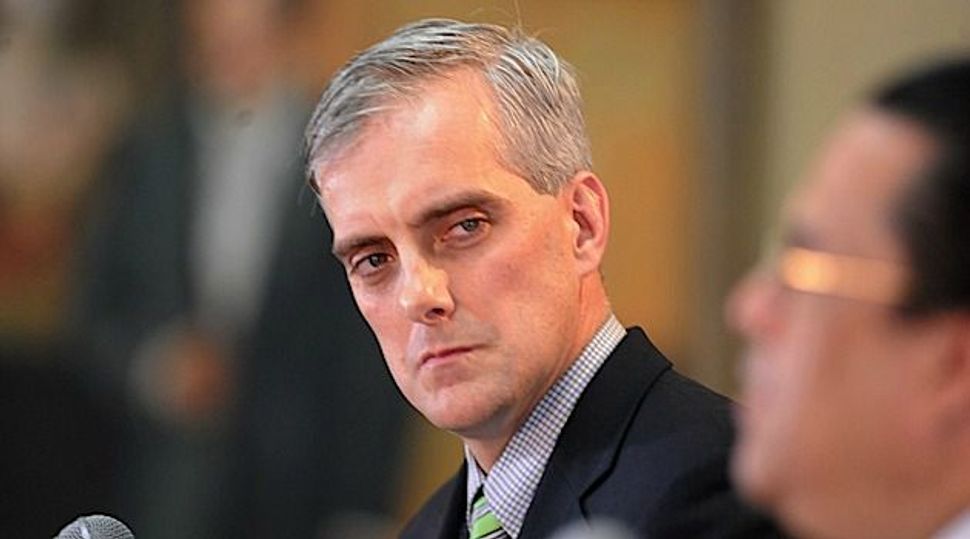 President Obama named as his new chief of staff a security official, Denis McDonough, who has strong ties to the Jewish organizational community.

McDonough, until now the deputy to National Security Adviser Tom Donilon, handled much of the National Security Council’s Israel-related traffic and has strong ties with Jewish groups, speaking for instance to the Washington Institute for Near East Policy just weeks before the last presidential election.

“Over the last four years, in speaking privately with me, and more publicly with Jewish Federation leaders, McDonough has steadfastly and vigorously defended the Administration’s Middle East policies,” William Daroff, the director of the Jewish Federations of North America’s Washington office, said in an email Saturday night to JTA.

“He has been out-front and very available to discuss and debate the intricacies of policy matters – always in a fair and respectful manner – and in a way that makes clear that he has no doubt about the commitment of President Obama to a strong US-Israel relationship,” Daroff said. “When he speaks, it is obvious that he has the President’s ear, and that he has had a tremendous influence over policy matters.”

In a Twitter posting, Nathan Diament, the Orthodox Union’s Washington director, called McDonough a “person of great savvy and candor.”

McDonough takes over from Jack Lew, an Orthodox Jew who has in his various capacities been the senior staff member taking calls from Jewish community leaders. Obama has nominated Lew to become Treasury Secretary.

Also announced on Friday was the departure of Jarrod Bernstein, the White House’s liaison to the Jewish community for the last two years.

In an email, Bernstein, who formerly ran specialty outreach for New York Mayor Michael Bloomberg, said he was returning to that city.

Bernstein was Obama’s third Jewish liaison; previously, the job had been handled jointly by Susan Scher and Danielle Borrin.