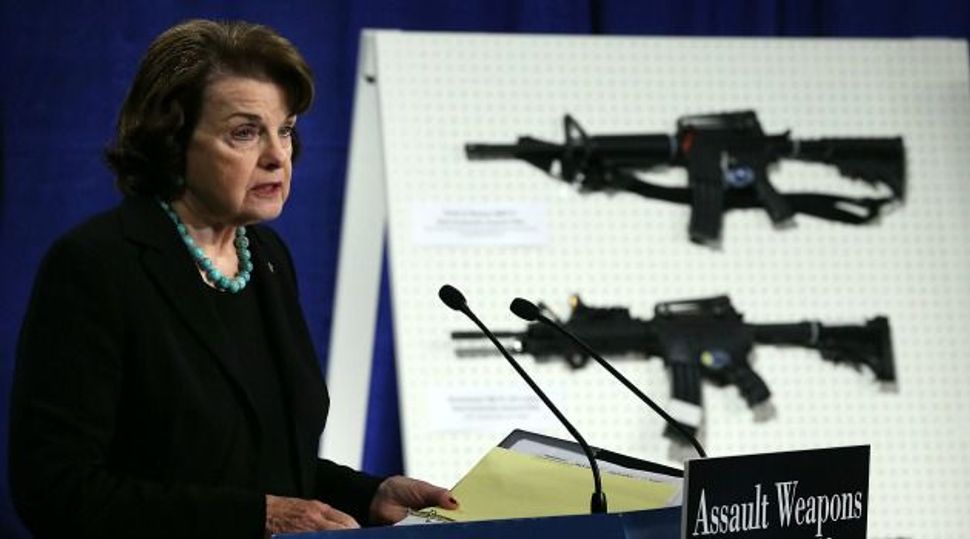 Gun Foe: Sen. Diane Feinstein is pushing for a new ban on assault weapons. She has been promised a vote in the Senate but passage is far from a sure thing. Image by getty images

The senator leading the charge to revive a U.S. assault weapons ban conceded on Sunday, just days before hearings on gun control open, that winning Senate passage will be tough but said she has been assured she will have the chance to bring it up for a vote.

President Barack Obama, who has made gun control a top priority after 20 children and six adults were killed by a gunman on Dec. 14 at a Connecticut school, said in remarks published on Sunday that gun control advocates should take into account the views of rural Americans who use guns for hunting.

“Part of being able to move this forward is understanding the reality of guns in urban areas are very different from the realities of guns in rural areas,” Obama told The New Republic magazine as he continued his administration’s outreach to gun owners even as he seeks new gun restrictions.

Senator Dianne Feinstein said Majority Leader Harry Reid has promised that even if the assault weapons ban is left out of a broader package intended to curb gun violence, she will have the opportunity to offer it as an amendment on the Senate floor.

Feinstein introduced legislation last Thursday to ban military-style assault weapons like the one used by the gunman in last month’s school shooting in Newtown, Connecticut, and high-capacity ammunition clips.

“This has always been an uphill fight. This has never been easy. This is the hardest of the hard,” Feinstein, a California Democrat, said on CNN’s “State of the Union” program.

“Now, will it (gun violence legislation) only be assault weapons? No, most likely. There will be a package put together. If assault weapons is left out of the package … I’ve been assured by the majority leader I’ll be able to do it as an amendment on the (Senate) floor, which is the way I did it in 1993,” Feinstein added.

Feinstein was referring to the previous U.S. assault weapon ban that she authored. That law expired in 2004 after 10 years in effect and Congress refused to extend it.

No major gun control legislation has made it through Congress in two decades in the face of opposition from the National Rifle Association and its gun rights allies.

Asked if she concedes that getting the Senate to pass a new assault weapons ban would be tough, Feinstein said, “I concede because the NRA is venal. They come after you. They put together large amounts of money to defeat you. They did this in ‘93 and they intend to continue it.”

Wayne LaPierre, chief executive officer and executive vice president of the Virginia-based NRA, is among the witnesses scheduled to testify before the Senate Judiciary Committee at a hearing on Wednesday on reducing gun violence.

Obama, in the magazine interview, said bridging a cultural divide in attitudes to gun ownership will be critical to his administration’s push to curb gun violence.

“If you grew up and your dad gave you a hunting rifle when you were 10, and you went out and spent the day with him and your uncles, and that became part of your family’s traditions, you can see why you’d be pretty protective of that,” Obama said.

Obama wants the ban on military-style assault weapons, a proposal that faces a tough battle in Congress, as well as mandatory background checks for all gun buyers, a step viewed as having a better chance of success.

The United States has a long-standing gun culture and the U.S. Constitution guarantees the right to bear arms.

Vice President Joe Biden on Friday took the administration’s case for gun control to the gun-friendly state of Virginia, part of a White House strategy to urge the public to pressure Congress into passing laws aimed at curbing firearms violence.

Feinstein’s legislation would prohibits the sale, manufacture, transfer and importation of 157 military-style assault weapons. It would ban an additional group of assault weapons that can accept a detachable ammunition magazine and have one or more military characteristics.

It also would ban large-capacity magazines and other ammunition feeding devices that hold more than 10 rounds and shooters to fire numerous rounds in rapid succession without reloading.