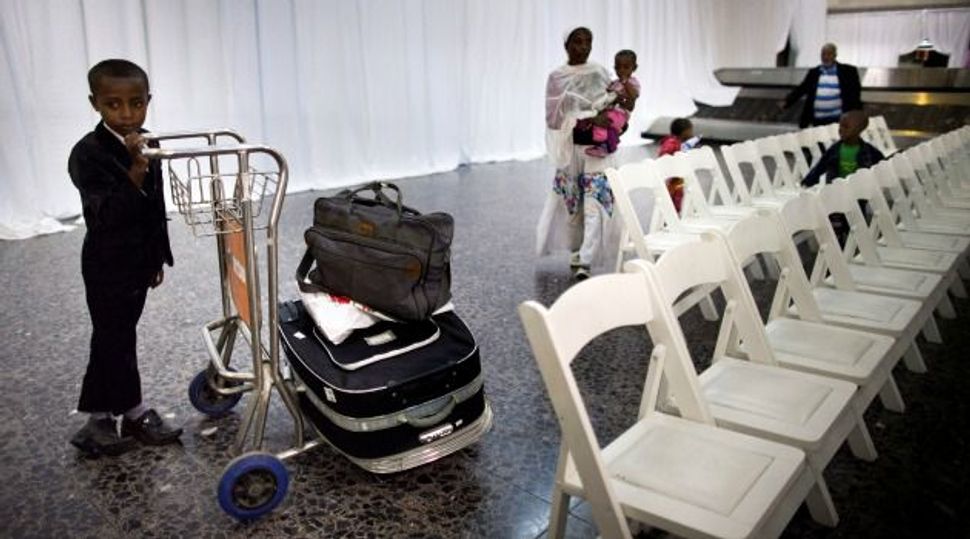 Population Control? Ethiopian Israeli women say they were given contraceptive shots against their will, leading to a sharp decline in birth rates. Image by getty images

Following a TV report alleging that Ethiopian Israeli women were being given contraceptive shots against their will, Israel’s Health Ministry has ordered physicians to put a stop to the practice.

The report, broadcast Dec. 8 on the “Vacuum” investigative news program on Israeli Educational Television, alleged that Ethiopian immigrants were coerced or coaxed into receiving Depo Provera, a long-term contraceptive shot that lasts three months, both by Jewish aid officials before their immigration to Israel and by health workers once in Israel.

In the past decade, births among Ethiopian women in Israel have fallen by nearly 50 percent, according to the report.

Last week, the Health Ministry instructed doctors to stop administering the shots unless women ask for them and understand their ramifications.

The ministry’s directive, sent by Director General Ron Gamzu on Jan. 20 in response to a petition filed by the Association for Civil Rights in Israel, instructs doctors “not to renew prescriptions of Depo Provera to women of Ethiopian origin or any other women who, for whatever reason, may not understand the treatment’s implications.”

The directive also instructs doctors to ask patients why they want to take the shot before administering it, and to use a translator if necessary. The directive does not confirm the allegations or acknowledge any wrongdoing.

The allegations extend as far back as the health clinics the women visited in Ethiopia prior to immigrating to Israel, where the American Jewish Joint Distribution Committee provides an array of health services to prospective Ethiopians immigrants, including contraception.

“They said, ‘Come, there are vaccinations, gather everyone,” Amawaish Alane, an Ethiopian immigrant to Israel, told “Vacuum” reporter Gal Gabbay in the Dec. 8 broadcast. “We said we wouldn’t receive it. They said, ‘You won’t move to Israel.’ ”

Alana and others on the program charged that workers at the JDC clinic told them it would be hard for them to work, get apartments or survive in Israel with large families.

A woman identified as S. said on the program that she was told at the Jewish aid compound in Gondar, Ethiopia, that she wouldn’t get a ticket to Israel if she didn’t take the shot.

“I didn’t want to take it. They wanted me to take it. But I didn’t know it was a contraceptive,” she said. “I thought it was an immunization.”

“At no time did JDC coerce anyone into engaging at family planning at its clinics. Those options were totally voluntary and offered to women who requested it,” a JDC spokesman in New York told JTA in December. “They chose the form of contraceptive based on being fully informed of all the options available to them.”

The “Vacuum” report alleged that the women continued to be coaxed into receiving the shots once they immigrated to Israel, often without their knowledge that what they were getting was contraception.

A spokesman for ACRI, which filed its petition after the Dec. 8 report aired, said ACRI is interested in preventing future unwanted contraceptive shots rather than casting blame.

“Admission of guilt is not what we’re about,” ACRI spokesman Marc Grey told JTA. “It’s more about acknowledging that this occurred and making sure it doesn’t happen again.”

The project coordinator for women and medical technologies at Isha L’Isha, an Israeli feminist group that also signed the petition, praised the Health Ministry’s Gamzu for issuing the new directive.

“What he’s done is different from all the other statements from the Health Ministry, which blamed the women and said that’s what they want,” said Hedva Eyal, the project coordinator. “He said maybe we made a mistake. We need to make sure this never happens to any group with any health issue.”