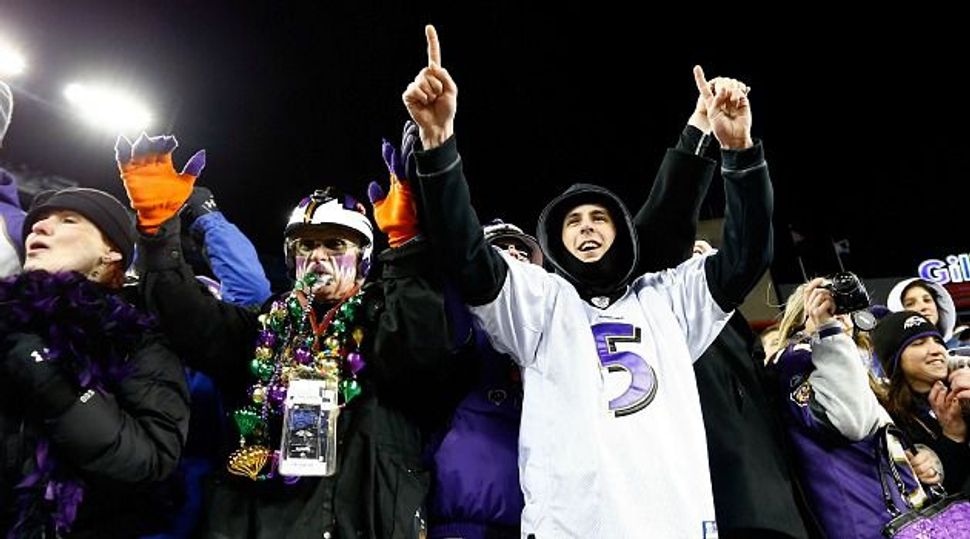 Art?s Army: Baltimore Ravens fan celebrate the win that sent their team to this Sunday?s Super Bowl. A group of Jewish fans are among the fiercest supporters, in part to honor the legacy of former owner Art Modell. Image by getty images

Every Sunday during the football season, a group of 30 diehard Jewish Baltimore Ravens fans suit up in purple pants, jerseys, socks, face paint and special Ravens tzitzit to watch the game together.

If the game falls on a Saturday, the club gathers for a “purple Shabbos,” when they wear Ravens jerseys under their suits, eat Ravens-inspired food from a purple menu and go into lockdown mode once the game starts so they don’t accidentally discover the final score before they can watch the recorded broadcast post-Sabbath.

The group has been reveling in the Ravens together for about five years at the homes of its members. Wives and kids come along now, too.

With their beloved squad slated to face off against the San Francisco 49ers in Super Bowl XLVII on Sunday, Heller and company no doubt will get even crazier than normal.

Adding to its significance, the showdown comes just six months after the death of former owner Art Modell, the Jewish Brooklyn native who moved the team to Baltimore from Cleveland in 1996. Ravens players dedicated this season to Modell, wearing a patch with “Art” on their jerseys.

And even more poignancy: The Pro Football Hall of Fame will announce whether Modell will be inducted the day before the big game.

“Honestly, I’m kvelling over this game,” David Modell, one of the late owner’s two sons and a former president and CEO of the Ravens, told JTA. “I’m not praying for results, I’m praying for the strength and courage of this team, and the rest will take care of itself. But a Super Bowl victory and a place in the Hall of Fame would be an incredible way to honor my father’s memory.”

Modell’s legacy is something of a touchy subject for football fans. Supporters see him as a brilliant businessman best known for his role in negotiations with the ABC television network leading to the creation of “Monday Night Football” in 1970, and for his support for community charities in Cleveland and Baltimore.

In Cleveland, Modell isn’t remembered as fondly. After 24 years as owner of the Browns, Modell took the team to Baltimore in 1996 and renamed them the Ravens. Many Cleveland fans remain bitter over the loss of their team and say it would be wrong to honor Modell with a spot in the Hall of Fame.

“I don’t care how much money he gave to either community or how well Baltimore is doing,” said one disgruntled Jewish Clevelander who asked that his name not be published for fear of bad football karma. “Art Modell stole our pride in Cleveland, and stealing in football should not be praised.”

David Modell told JTA that many Cleveland fans wrote to him and his brother, John, to offer condolences after their father passed away. It seemed they forgave Modell, who sold the Ravens in 2004, for abandoning Cleveland and now remember him mainly as a football legend.

Although Modell’s two sons are Catholic, children from the first marriage of his wife Patricia Breslin, David Modell said his father made sure to teach them the basic Jewish traditions of the religion he loved.

“My father wasn’t the type of man who wore his spirituality on his sleeve, but he was a quietly religious and very spiritual Jew,” David said. “We knew that he carried around a piece of paper with God’s name in his pocket every day of his life. Every year he would light memorial candles for his parents death. He always attended temple on High Holidays. And Chanukah candles were so important to him that my brother in California and I Skyped together this year to light candles and recite the prayers.”

Modell had a special relationship with football players as well as fans, specifically with Ray Lewis, the Ravens’ All-Pro linebacker who is retiring at the end of this season. Modell watched his team practice every day and had a father-son relationship with Lewis.

Unlike his former boss, Lewis did wear his spirituality on his sleeve – or at least on his chest. Following a 24-9 playoff victory over the Colts earlier this month, Lewis removed his game jersey to reveal a T-shirt that read “Psalm 91,” which concludes with the line, “With long life I will satisfy him, and show him my salvation.”

Heller and his friends responded by getting together for a communal reading of the psalm and to pray on the Ravens’ behalf.

“We’ve loved the Ravens since Art Modell first brought them to Baltimore in 1996,” Heller said. “We all looked up to him as kids. And this Super Bowl is going to be ours.”