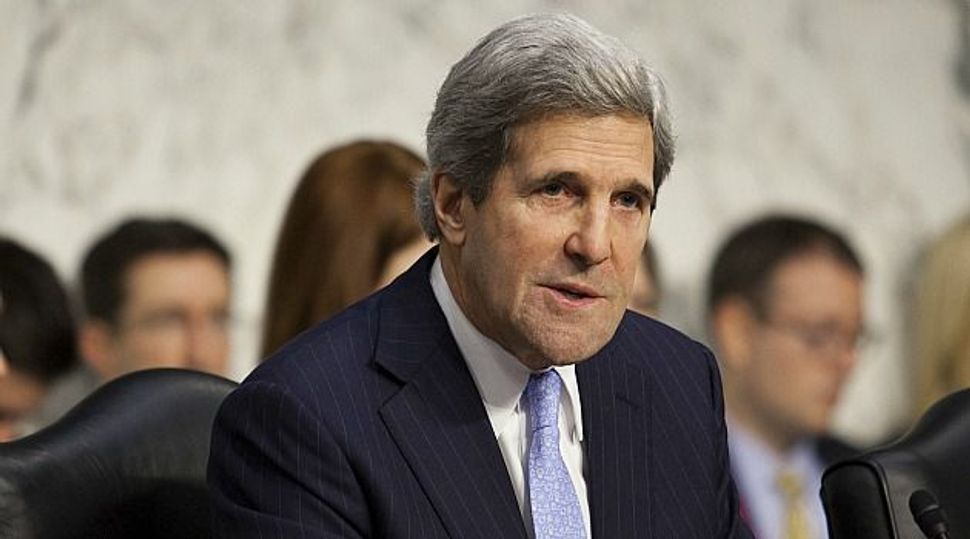 Secretary of State John Kerry stressed his commitment to promoting Israeli-Palestinian peace on Sunday in telephone calls to the leaders of both sides, the State Department said.

In separate conversations, Kerry, who took over as the top U.S. diplomat from Hillary Clinton on Friday, spoke to Israeli Prime Minister Benjamin Netanyahu and to Palestinian President Mahmoud Abbas.

“Turning to Middle East peace, the secretary underscored his personal commitment and that of President (Barack) Obama to support Israel’s security and to pursue a lasting peace between Israelis and Palestinians.” State Department spokeswoman Victoria Nuland said of Kerry’s conversation with Netanyahu.

A spokesman for the Israeli prime minister confirmed that the call took place but provided no details.

Netanyahu assumed the responsibility on Saturday of forming a new Israeli government following the Jan. 22 election in which his rightist Likud-Beitenu lost ground but still emerged as the biggest party, with 31 seats in the 120-seat Israeli parliament.

His new government is expected to include a new centrist party headed by former TV personality Yair Lapid, which with 19 seats is the second-largest party in parliament, and the 12-seat far-right pro-settler Bayit Yehudi.

The success of the centrists in the election is expected to improve the outlook for Israeli-Palestinian peace. Formal talks broke down in 2010 over Israel’s continued building of Jewish settlements on land the Palestinians want for a state.

Since then each side has taken steps that have antagonized the other.

The U.N. General assembly on Nov. 29 overwhelmingly upgraded the Palestinians status to that of “non-member state,” prompting Israel to retaliate by withholding tax revenues owed to them as well as by announcing fresh plans for settlement construction.

However, Israeli officials said last week that they would release about $100 million in withheld tax revenues, a move that Kerry “commended … as an important step” in his conversation with Netanyahu, the State Department said, adding that their discussion also covered Iran and Syria.

In his call to Abbas, Kerry, former chairman of the Senate Foreign Relations Committee, reiterated his commitment to peace and promised to keep working with Congress to release budget support funds for the Palestinian Authority.

An Abbas aide told Reuters that Kerry told Abbas he was determined to facilitate the restart of stalled peace between the parties and that he hoped to be able to meet him soon, although no time or venue was set.

Nuland said Kerry spoke on Saturday to Israeli President Shimon Peres, who holds a largely ceremonial position. She declined all comment on when Kerry might travel to the region.

“The two men held a lengthy conversation on Saturday night and Peres said that the results of the recent general election could open a window for renewed peace talks,” a Peres spokeswoman said in a statement.

Netanyahu, who has been asked by Peres to form a new coalition, said on Saturday that renewing talks with Abbas would be a top priority for his new government.

“The next government that I will form will be committed to peace. I call on Abut Mazen (Abbas) to return to the negotiating table. Every day that passes without us talking to jointly find a way to create peace for our peoples is a day wasted,” he said.