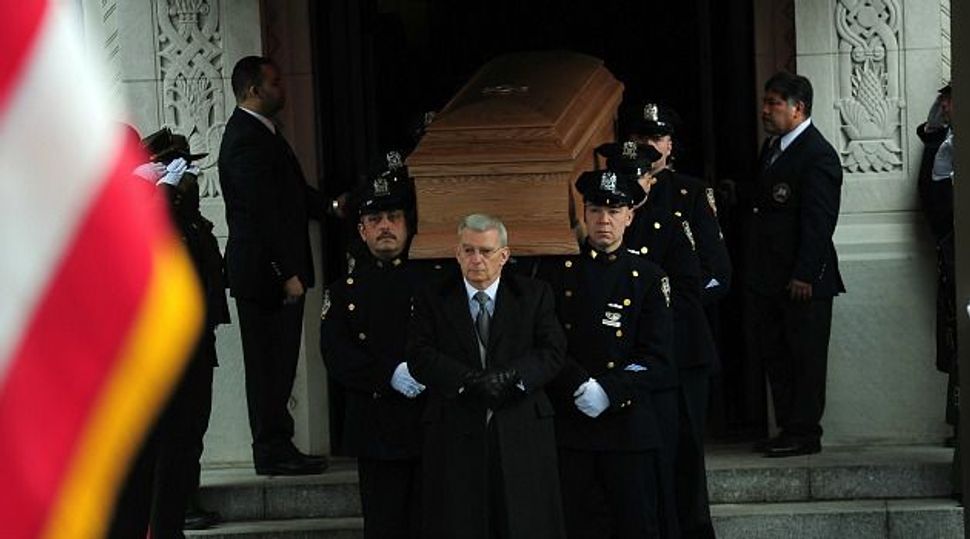 You Did Fine: Ed Koch?s casket is carried out of Manhattan?s Temple Emanu-El after the former mayor?s funeral. Image by getty images

Former New York City Mayor Ed Koch was memorialized on Monday as an in-your-face, wisecracking leader who helped transform the city from a symbol of urban decay to the vital, glittering metropolis it is today.

As Koch’s casket was led out of Temple Emanu-El, a soaring Fifth Ave. synagogue opposite Central Park, an organ played Frank Sinatra’s “New York, New York” while mourners including former U.S. President Bill Clinton and a who’s who of New York politics stood and applauded.

Koch died on Friday at the age of 88 in Manhattan – the only place other than heaven he could imagine living, as he was known to say.

“I come today with the love and condolences of 8.4 million New Yorkers who really are grieving with you at this moment,” said the city’s current mayor, Michael Bloomberg.

Speakers joked about the famously attention-loving Koch’s obsession with stage-managing his passing. His grave-stone, complete with an epitaph and a bench bearing Koch’s name, has been ready since 2008, and his friends said he had been planning the funeral for years.

“We started talking about his death in the ’80s,” said his former chief of staff Diane Coffey.

As mayor from 1978 to 1989, Koch, with his trademark phrase “How’m I Doin?”, was a natural showman and tireless promoter of both himself and the city. He helped repair the city’s finances as it teetered on the edge of bankruptcy, and later led a building renaissance that would see 200,000 units of affordable housing erected or rehabilitated in some of the city’s most crime-infested areas.

He could also be a divisive figure. His determination to shut Sydenham, a poorly-performing Harlem hospital that was one of the only city hospitals employing black doctors, angered black New Yorkers. And AIDS activists said he was too slow to react to the epidemic that ravaged the city’s gay population in the 1980s.

Tall, nearly bald and speaking with a high-pitched voice, Koch was an unmistakable presence. He was famously argumentative, and rarely walked away from verbal jousting.

His friend James Gill remembered Koch’s response to someone who had written a letter criticizing the former mayor.

His nephews and grand-nephew and grand-niece remembered Koch, who never married, as devoted “Uncle Eddie” – eager to hear what they thought of his appearances on talk shows but also happy join his 11-year-old grand-niece for a manicure.

Clinton read from a stack of letters Koch had sent him over the years and said Koch had “a big brain, but he had an even bigger heart.”

Koch remained relevant in politics long after 1989, when he lost the Democratic nomination to David Dinkins for what would have been a record fourth term as mayor. But when asked if he would run for office again, he liked to say, “The people threw me out and the people must be punished.”

His endorsement was coveted by candidates decades after he left office. And his unwavering and loud support of Israel made Koch “one of the most influential and important American Zionists,” said former Ambassador Ido Aharoni.

At Monday’s memorial, Bloomberg noted the synagogue Koch had chosen for the funeral stood just a few blocks from the midtown bridge that had been renamed to honor him. Last year, the city released a video of Koch standing at the bridge’s entrance ramp, calling out to approaching cars: “Welcome to my bridge! Welcome to my bridge!”

“No mayor, I think, has ever embodied the spirit of New York City like he did. And I don’t think anyone ever will,” Bloomberg said. “Tough and loud, brash and irreverent, full of humor and chutzpah – he was our city’s quintessential mayor.”