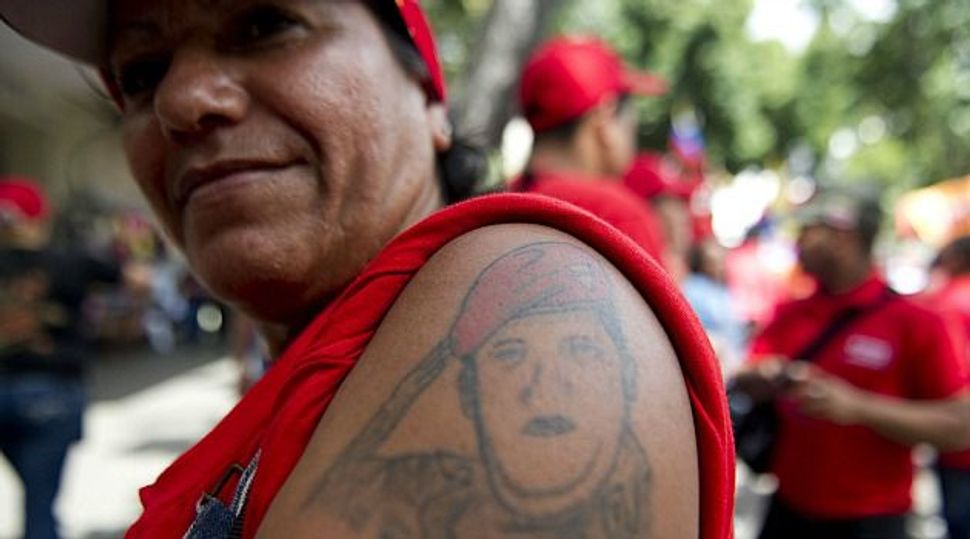 The Venezuelan human rights group Espacio Anna Frank says its goal is to promote tolerance by teaching the life story of the teenage diarist murdered by the Nazis.

But is there something sinister lurking behind the organization’s benevolent facade?

SEBIN, the Venezuelan intelligence service, seems to believe so.

According to a dossier attributed to SEBIN, the Caracas-based group is actually part of an Israeli cloak-and-dagger operation aimed at undermining the leftist government of President Hugo Chavez.

“We conclude that [Espacio Anna Frank] operates as a strategic arm of the Israeli intelligence in the country … operating in the field of subversive socio-political influence through representatives of far-right Zionist groups and economic elites,” said the 34-page report.

The document, which includes surveillance photographs of the group’s offices and personal details of its board members, goes on to suggest that Espacio Anna Frank poses a security threat and should be kept under surveillance through hidden cameras and listening devices.

The report is part of a massive cache of material obtained by Analises24, an Argentinian media outlet opposed to Chavez, that includes intelligence reports, clandestinely recorded photos and videos and even personal information on Chavez’s family. Nicolas Solano, Analises24’s editor, told JTA that the website received the material from “a former high-ranking SEBIN source.”

On Jan. 22, the website published 50 documents from the cache that focus on Venezuelan Jews, Israel and the Middle East. Many more documents will be released soon.

Venezuelan officials at the country’s embassy in Washington would not comment on the documents, forwarding an inquiry to Caracas, which has not responded.

But if the documents are indeed authentic, it would confirm what Venezuelan Jews have long suspected: That their own government considers them to be a fifth column and is spying on them.

“As part of the security apparatus of the regime, many Venezuelans are under surveillance,” said Sammy Eppel, a Jewish columnist at the Venezuelan daily El Nacional, a leading opposition newspaper. “The Jewish community is obviously perceived as some sort of threat that warrants those actions.”

Paulina Gamus, one of the directors of Espacio Anna Frank and a former member of the Venezuelan parliament, said the allegations against her and her organization were spurious.

“They accuse [Espacio Anna Frank] of belonging to the Mossad and the Israeli secret services only because we are an institution that promotes respect of different religions and cultures and have a Jewish component, although we are all Venezuelans,” she wrote in an email.

Venezuelan Jews told JTA they were not surprised that SEBIN, the Bolivarian Intelligence Service, has been spying on them.

State security raided Jewish institutions twice, in 2004 and 2007, and Chavez has accused Israel of financing the “counter-revolution” in Venezuela. In 2009, a Caracas synagogue was ransacked by an angry mob – including several police officers – following Operation Cast Lead, the 2009 Israeli military campaign in Gaza. Chavez condemned the synagogue attack and several suspects were arrested.

Combined with a failing economy and a surge in violent crime, the hostility from the Chavez government has led to a Jewish exodus to the United States, Israel and other Latin American countries. Fewer than half the 1999 Jewish population of 22,000 remains.

Rabbi Pynchas Brener is among those who relocated. A vocal critic of Chavez, Brener is identified in the SEBIN documents as the Mossad’s chief spymaster in Venezuela. One chart places him at the head of an intricate web of informants and cover-up operations that report directly to the Israeli intelligence service and the American and Canadian embassies in Caracas.

“I’m not a Mossad agent – you can write that – and I never was one,” Brener told JTA. “Maybe I’ll be one in the future.”

Born in Poland, Brener was raised in Peru and led a congregation in Caracas for 44 years before retiring to Florida in 2011. He said he was labeled a spymaster because he was among Venezuela’s more visible Jews.

“Venezuela is the most tolerant society that I know,” Brener said. “There’s almost zero anti-Semitism. But the government has been cultivating it.”

The leaks come at a potentially pivotal time for Venezuela. Chavez has not been seen in public in months since undergoing an operation related to an unspecified form of cancer. The government vows that the self-proclaimed revolutionary leader will recover and be sworn in for his fourth successive presidential term. But rumors abound that he is terminally ill.

For many members of the Jewish community, the possible departure of Chavez from Venezuelan politics would be a cause for renewed hope. Last month Ronald Lauder, the president of the World Jewish Congress, met in Caracas with Nicolas Maduro, the vice president and temporary fill-in for Chavez. The meeting, which included several Latin American Jewish leaders, seemed to hint at a possible rapprochement.

“[Maduro] is not Chavez,” Gamus said. “He does not have his charisma or character, and he is not influenced by the anti-Semitic ideologies like those that Chavez had.”

But one should be careful not to write off Chavez. Like his hero, Cuban leader Fidel Castro, who has survived countless assassination attempts and suspected ailments, Chavez has regularly proven rumors of his demise to be greatly exaggerated.

On Monday, Venezuelan Defense Minister Diego Molero reported that Chavez was having his “best moment yet” since he underwent surgery.