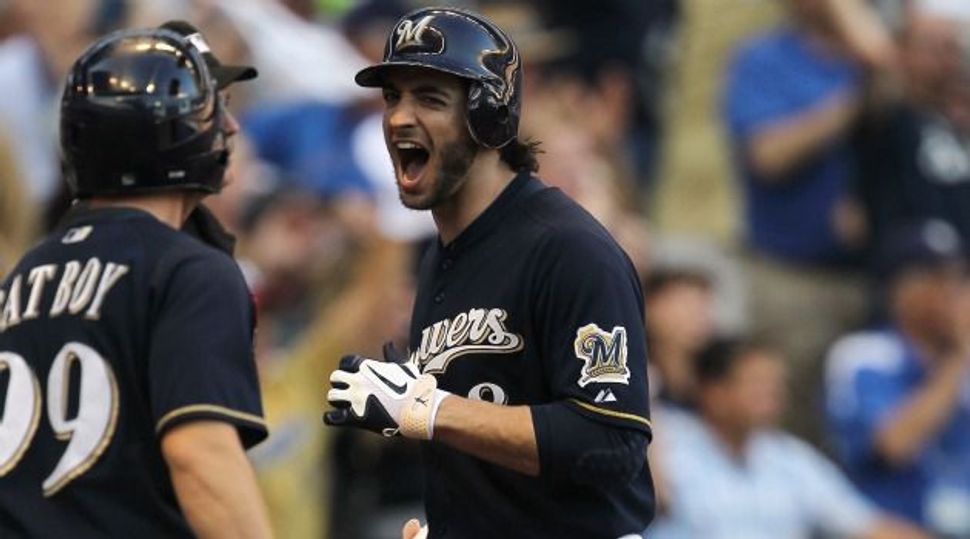 Former baseball MVP Ryan Braun is reportedly the latest in a series of players linked to a Miami-area clinic that allegedly distributed performance-enhancement drugs to a number of stars.

According to the Yahoo! Sports report, the Milwaukee Brewers star’s name appears on three records from the Biogenesis clinic, but there are no drugs listed next to his entry.

Major League Baseball is investigating the Biogenesis clinic and its operator, Anthony Bosch. Braun’s name is on a list along with Alex Rodriguez, Melky Cabrera, Cesar Barillo, all three of whom received PEDs from Bosch according to the Miami New Times, which broke the story last week.

Alex Rodriguez has denied having anything to do with Bosch, the New York Times reported (http://www.nytimes.com/2013/02/06/sports/baseball/report-links-ryan-braun-to-florida-clinic-under-scrutiny-by-baseball.html).

Braun, who was named to the 2011 Forward 50, is the first Jewish player in decades to be named Most Valuable Player. He explained in a written statement that his “attorneys, who were previously familiar with Tony Bosch, used him as a consultant,” to answer questions about testosterone levels and the possibility of tampering with urine samples, in preparation for Braun’s appeal of his positive test for illegal synthetic testosterone during the 2011 postseason.

“I have nothing to hide and have never had any other relationship with Bosch,” Braun said. “I will fully cooperate with any inquiry into this matter.”

According to the New York Times, Bosch is not a licensed physician in Florida, and his medical experience remains unclear.

In February 2012, Braun became the first baseball player to successfully appeal a positive test, after a baseball arbitrator ruled that there chain-of-custody issues surrounding his urine samples, the New York Times reported.

According to the Yahoo report, Braun still has eight years and more than $130 million dollars left on his contract.