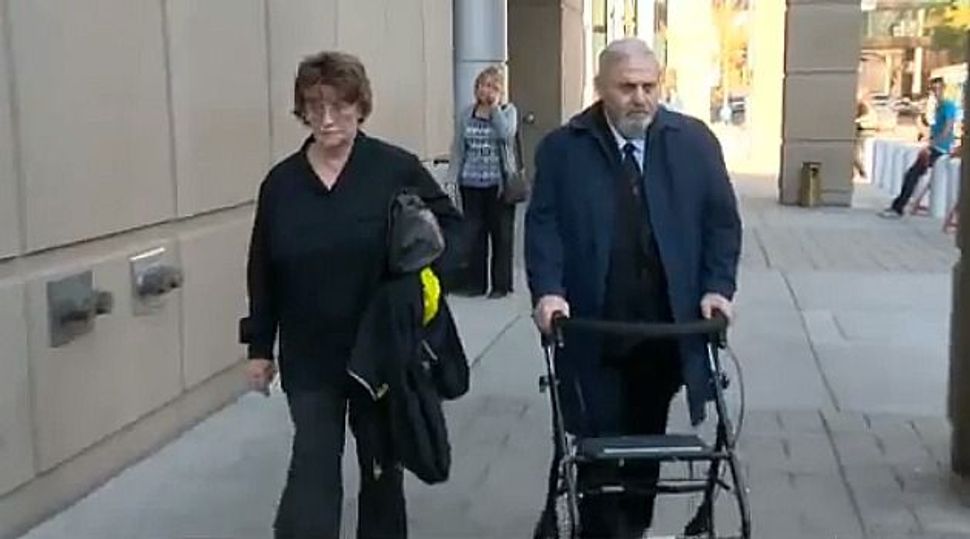 Fissures are appearing in Calgary’s Jewish community following the conviction of one of its members, a prominent forensic psychiatrist, for sexually assaulting patients. Dr. Aubrey Levin was sentenced on January 31 to five years in prison for abusing people involved with the province of Alberta’s criminal justice system who were sent to him for assessment and treatment.

Tensions began to rise among the western Canadian city’s approximately 7,500 Jews when Levin’s defense attorney announced to the court during a sentencing hearing that his client’s sexual assaults were only “minor” offenses, and then proceeded to read aloud a letter from Levin’s rabbi, Rabbi Yisroel Miller of House of Jacob Mikveh Israel, Calgary’s Orthodox synagogue.

The rabbi wrote that the psychiatrist is still loved and respected in the Jewish community and that “his humble manner and complete lack of arrogance endeared him to everyone.” The rabbi also pleaded for leniency for Levin, writing, “The bad does not erase all the good. I know all the goodness within him still remains. A prison term would be a death sentence for him.”

Nine counts had been originally brought against Levin, a 74-year-old immigrant from South Africa. A jury found him guilty of three, acquitted him of two, and was deadlocked on the remaining four, for which the judge in the case declared a mistrial.

“Dr. Levin, your actions in sexually assaulting…constitute horrible violations of the trust that these the patients put in you as their psychiatrist,” said Court of Queen’s Bench Justice Donna Shelley at the sentencing.

“As a psychiatrist, you knew their vulnerabilities. They have confided in you things they likely had not confided to anyone else. They were entitled to feel safe and supported during their appointments with you. Instead, you exploited them in a predatory and repetitious manner.” The offender’s wife, Erica Levin, was not in court. She is under house arrest following an alleged attempt by her to bribe one of the jurors.

Andrea Silverstone, the Shalom Bayit (domestic violence) coordinator for the Jewish Family Service in Calgary, told the Forward that Levin’s connection to the Jewish community generally flew below the radar until Miller’s letter was read aloud in court.

Then, on February 2, the Calgary Herald published a letter from a Jewish woman named Maggie Serpa. “This letter and this rabbi do not represent the Calgary Jewish community,” she wrote of the letter read in court. “I am a Jew in Calgary, where there are several synagogues. This rabbi does not represent my opinion and that of many others in this sad case. Levin has a right to pray and get spiritual support, as anyone else does, but he does not have the right to use the Jewish community to bolster his defense.”

Three days later, the paper ran a letter from Adam Singer, president of the Calgary Jewish Federation, who also was quick to distance the community from Rabbi Miller’s remarks. “Everyone is entitled to express their own opinions, but in making these comments, Miller was not speaking on behalf of the Jewish community of Calgary,” he wrote. “Calgary Jewish Federation, the representative body of Calgary’s Jewish community, condemns sexual abuse, domestic violence and violations of human dignity. The victims of such crimes deserve to see justice done, and those found guilty in a court of law must face the consequences of their actions.”

Silverstone, who is also executive director of Support Services For Abused Women,” a Calgary non-profit organization, pointed out how vulnerable Levin’s victims were. “These were people who were mandated by the court or strongly advised by their lawyers to see him,” she said. “This is really shocking for the community,” Silverstone noted not only about Levin’s crimes, but also about Rabbi Miller’s letter. “I couldn’t believe a rabbi from Calgary would do that.” Rabbi Miller has not issued any more statements, and so far, there has been no public response from House of Jacob Mikveh Israel’s board.

“I want to reach out to Rabbi Miller. I am very eager to talk to him so that I can understand the decision he made, and to make him understand the damage his statement has done,” Silverstone said. “Not condemning the actions of the perpetrator makes the suffering of his victims worse.”