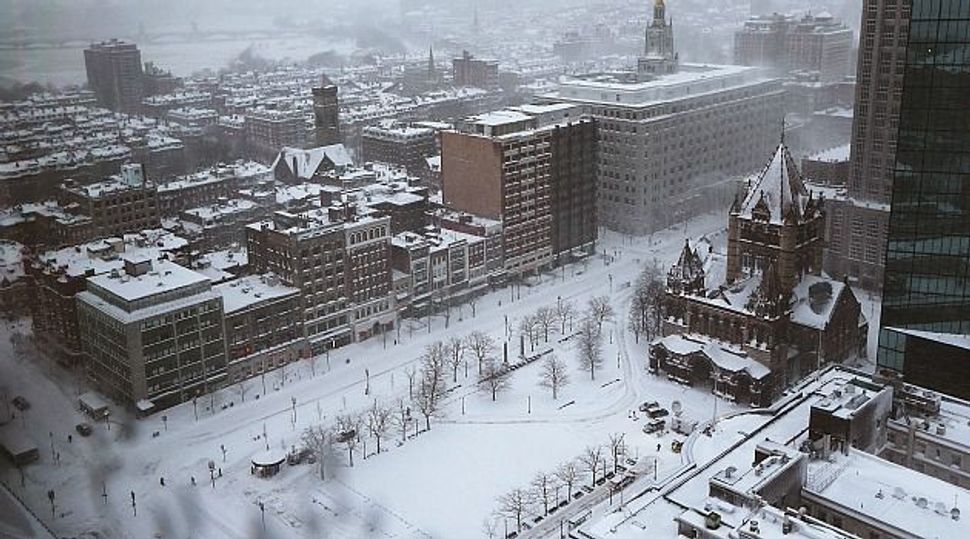 Nemo?s Rules: Boston was blanketed by snow this morning as the Nor?easter pounded New England. Image by getty images

Some synagogues have cancelled services ahead of a potentially historic blizzard.

At least two synagogues in Providence, R.I., have called off Shabbat services this week in light of the expected severe weather. More than two feet are expected in Providence, one of the highest predicted snowfalls.

“Due to the impending blizzard all worship services have been canceled Friday, Saturday and Sunday,” said a recorded message at Providence’s Temple Beth-El on Friday afternoon.

The Touro Synagogue, the oldest synagogue in the country, will reportedly not hold prayer services this shabbat for the first time in years.

In New York City, where snow is expected to be lighter, fewer cancellations were reported.

B’nai Jeshurun on Manhattan’s Upper West Side said services will be held as usual with the exception of a special service for young children, which had been canceled.

“A lot of people live within walking distance so we’re allowing them to use their own discretion,” said a spokesperson.

Forecasters warned of more heavy winds and snowfalls on Saturday, particularly near Boston, where up to 30 inches (76 cm) was expected in some areas, as well as in New York, Connecticut and Maine.

In the first death blamed on the blizzard, one man in his seventies was killed when a driver lost control of her car and hit him in Poughkeepsie, New York, media reported.

The Pilgrim Nuclear Power Plant in Plymouth, Massachusetts lost power and automatically shut down during the storm late on Friday, but there was no threat to the public, said the Nuclear Regulatory Commission.

Winds reached 35 to 40 miles per hour (56 to 64 km per hour) by Friday afternoon and forecasters expected gusts up to 60 mph overnight.

The storm prompted the governors of Massachusetts, Rhode Island, Connecticut, New York and Maine to declare states of emergency.

Massachusetts Governor Deval Patrick took the rare step of announcing a ban on most car travel starting Friday afternoon, while Connecticut Governor Dannel Malloy closed the state’s highways to all but emergency vehicles.

In many cases, authorities ordered non-essential government workers to stay home, urged private employers to do the same, told people to prepare for power outages and encouraged them to check on elderly or disabled neighbors.

“People need to take this storm seriously,” said Malloy, Connecticut’s governor. “Please stay home once the weather gets bad except in the case of real emergency.”

The storm wasn’t bad news for everyone.

In New York City, Mayor Michael Bloomberg suggested people relax at home – cook or watch a movie. Bloomberg said he planned on catching up on his sleep.

As she stocked up at a Brooklyn grocery store, 28-year-old Jackie Chevallier said that after two years without much snow, she was looking forward to waking up to a sea of white.

The storm also posed a risk of flooding at high tide to areas still recovering from Superstorm Sandy last October.

“Many of the same communities that were inundated by Hurricane Sandy’s tidal surge just about 100 days ago are likely to see some moderate coastal flooding this evening,” said Bloomberg.