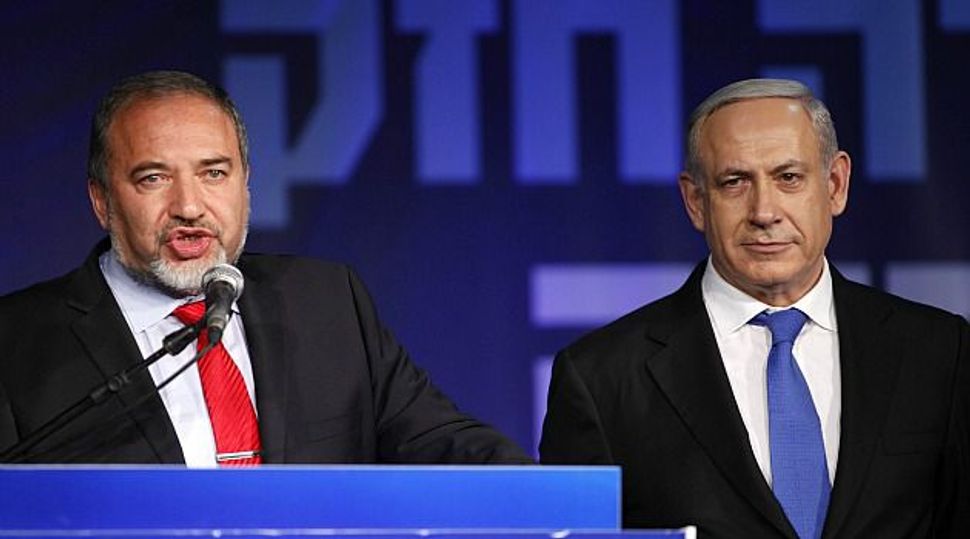 Israel has no chance of signing a permanent peace accord with the Palestinians and should instead seek a long-term interim deal, the most powerful political partner of Prime Minister Benjamin Netanyahu said on Saturday.

The remarks by Avigdor Lieberman, an ultranationalist whose joint party list with Netanyahu narrowly won a Jan. 22 election while centrist challengers made surprise gains, seemed designed to dampen expectations at home and abroad of fresh peacemaking.

A spring visit to Israel and the Palestinian territories by U.S. President Barack Obama, announced this week, has stirred speculation that foreign pressure for a diplomatic breakthrough could build – though Washington played down that possibility.

In a television interview, ex-foreign minister Lieberman linked the more than two-year-old impasse to pan-Arab political upheaval that has boosted Islamists hostile to the Jewish state.

These include Hamas, rivals of U.S.-backed Palestinian President Mahmoud Abbas, who control the Gaza Strip and spurn coexistence with Israel though they have mooted extended truces.

“Anyone who thinks that in the centre of this socio-diplomatic ocean, this tsunami which is jarring the Arab world, it is possible to arrive at the magic solution of a comprehensive peace with the Palestinians does not understand,” Lieberman told Israel’s Channel Two.

“This is impossible. It is not possible to solve the conflict here. The conflict can be managed and it is important to manage the conflict … to negotiate on a long-term interim agreement.”

Abbas broke off talks in late 2010 in protest at Israel’s settlement of the occupied West Bank. He angered Israel and the United States in November by securing a U.N. status upgrade that implicitly recognised Palestinian independence in all the West Bank, East Jerusalem and Gaza.

Israel insists it will keep East Jerusalem and swathes of West Bank settlements under any eventual peace deal. Most world powers consider the settlements illegal because they take up land seized in the 1967 Middle East war.

Lieberman, himself a West Bank settler, said the ball was “in Abu Mazen’s (Abbas’) court” to revive diplomacy.

Abbas has demanded Israel first freeze all settlement construction. With two decades gone since Palestinians signed their first interim deal with Israel, he has ruled out any new negotiations that do not solemnise Palestinian statehood.

Netanyahu’s spokesman Mark Regev noted that Lieberman, in the Channel Two interview, had said he was expressing his own opinion.

Asked how Netanyahu saw peace prospects for an accord with the Palestinians, Regev referred to a speech on Tuesday in which the conservative prime minister said that Israel, while addressing threats by its enemies, “must also pursue secure, stable and realistic peace with our neighbours”.

Netanyahu has previously spoken in favour of a Palestinian state, though he has been cagey on its borders and whether he would be prepared to dismantle Israeli settlements.

Lieberman’s role in the next coalition government is unclear as he faces trial for corruption. If convicted, he could be barred from the cabinet. Lieberman denies wrongdoing and has said he would like to regain the foreign portfolio, which he surrendered after his indictment was announced last year.