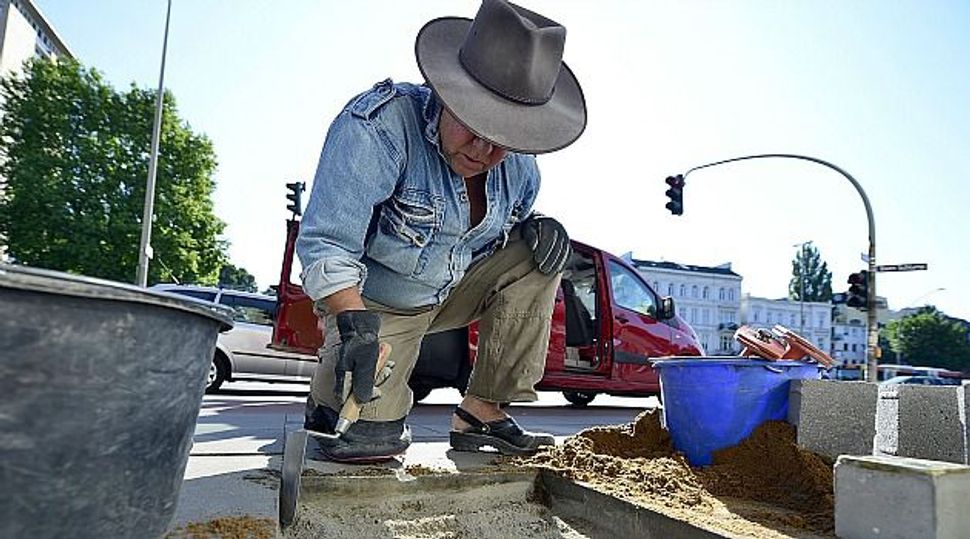 Out of ?Step?: German artist Gunter Demnig works on his ?Stumbling Blocks? Holocaust memorial. A Dutch town that once housed a Nazi transit camp rejected a similar memorial, claiming it does ?enough? to remember the Holocaust. Image by getty images

The Dutch government has asked the European Commission to recognize the former Nazi transit camp Westerbork as a heritage site.

But the municipality in whose jurisdiction Westerbork lies, Midden-Drenthe, reportedly has rejected a plan to place memorial cobblestones in front of the homes of Holocaust victims – an ongoing project taking place in municipalities across Europe for the past 20 years.

The public broadcaster NOS quoted unnamed city officials as saying the municipality “does enough to commemorate the Holocaust already.”

In total, nearly 100,000 Jews, or 70 percent of Holland’s pre-Holocaust Jewish population, were transported from Westerbork to Nazi extermination and concentration camps, including Auschwitz, Sobibor, Bergen-Belsen, and Theresienstadt, according to Yad Vashem. The premises of the former Nazi camp have been made a national memorial.

According to Yad Vashem, Westerbork had originally been established in October 1939 by the Dutch government, in order to detain German Jewish refugees who had entered the Netherlands illegally.

Meanwhile, the Peace Palace in The Hague was also nominated for heritage site status. The palace houses the International Court of Justice, was opened 100 years ago “to prevent the kind of war to which the camp so painfully attests and must continue to do so,” the Council for Culture – a government advisory body – wrote in a recommendation to the Cabinet in December.

The Cabinet adopted the recommendation on Feb.8 and requested the European Council to give the two locales the European Heritage Label – a designation reserved for “sites which have played a key role in the history and the building of the European Union,” according to the European Commission.