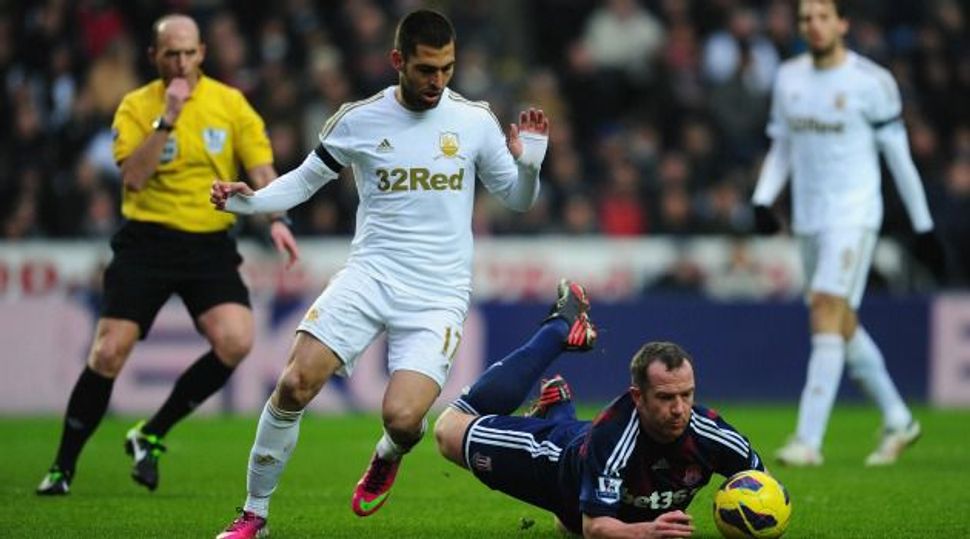 Not Welcome: Itay Schechter has skipped Swansea?s training trip to Dubai over fears he could face problems as an Israeli. Image by getty images

An Israeli soccer player for a British team is sitting out a team visit to Dubai because of tensions between the emirate and Israel.

The 25-year-old striker, Itay Schechter, who plays for Swansea City, was prevented from attending the six-day group training session, The Jewish Chronicle reported on Wednesday.

The United Arab Emirates does not recognize the state of Israel and Israeli passport holders can be arrested and deported on entering without a special visa. Dubai is one of the UAE’s severn emirates, or city-states.

Hamas and Dubai have accused Israel of assassinating Hamas commander Mahmoud al-Mabhouh in a hotel in Dubai in January 2010 in a plot involving a dozen assassins using forged passports from Britain, Ireland, Germany and France, among other countries.

Schechter, who was once a victim of anti-Semitic abuse when he was given a Nazi salute during a training session, has traveled to Israel to train with his former Hapoel Tel Aviv football club ahead of a Premier League match this Sunday, the newspaper reported.

In 2009, the Dubai Tennis Championships was levied a record fine over its country’s refusal to award a visa to Israeli tennis player Shahar Pe’er. She received a visa and appeared in the 2010 tournament in Dubai.