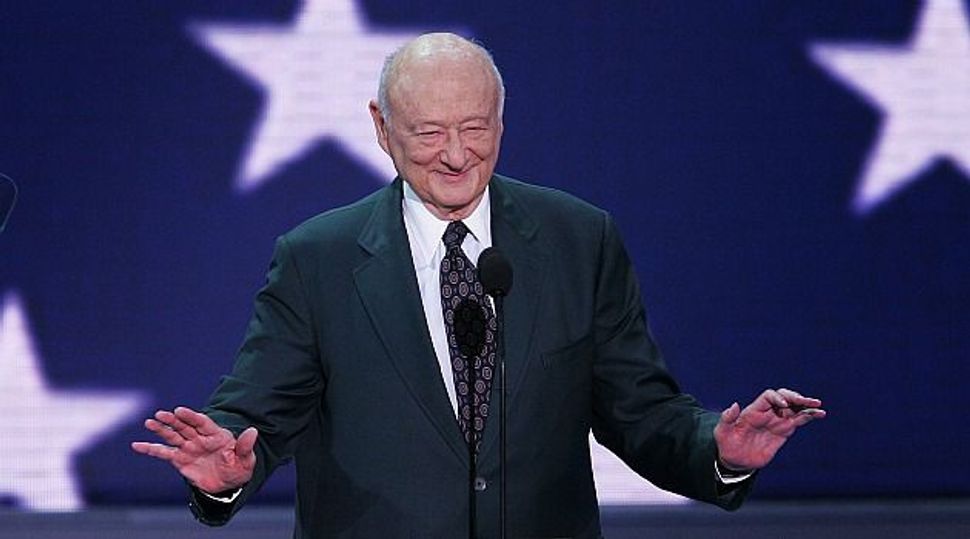 Same Ed: Ed Koch displayed some of his trademark combativeness as a teenage GI in a diary that his sister uncovered after the ex-New York mayor?s death. Image by getty images

Ed Koch documented his struggles with racist, Jew-hating soldiers as a young GI in a long-lost diary that came to light after his death earlier this month.

The late ex-mayor of New York wrote of his struggles with bigotry during his Army boot camp in a diary that his sister found while cleaning out his Greenwich Village apartment, the New York Post reported.

“What struck me was that he was the same person then that he was at the end of his life,” Koch’s sister, Pat Thaler, 80, told the paper.

His mother gave him the leather-bound diary with instructions to keep a record of his experiences. He went on to serve with the 104th Infantry Division, landed in Cherbourg, France, in September 1944, and earned two medals.

Along with the usual Army complaints about bad food and bureacracy, Koch boldly spoke out against the racism in the still-segregated ranks.

“Had an argument with several of the boys over anti-Negro prejudice, this led to arguments over Jews and the usual line,” Koch wrote on May 24. “It’s a pity that there are so few liberals in the land and so many ignorant people.”

On August 20, the young soldier complained about an inspection he called a huge waste of everyone’s time.

“It took about an hour to get everything ready for display and then the (colonel)merely walked swiftly up and down the aisles and glanced at the tents once in a while,” he wrote. “It was the biggest example of a waste of time that I have ever seen in the Army.”

The next day, Koch snapped after being taunted with the anti-Semitic epithet ‘Yiddy’ by a fellow soldier named LaRue. He challenged the bigot to a fight, which went down in full view of the entire company.

“(The lieutenant) wanted to stop the fight but I wouldn’t let him. Finally, he did,” Koch wrote. “Strangely enough I’m not marked up which makes me feel pretty good.”

“Even though I took the beating, I’m glad I fought,” the future mayor wrote.