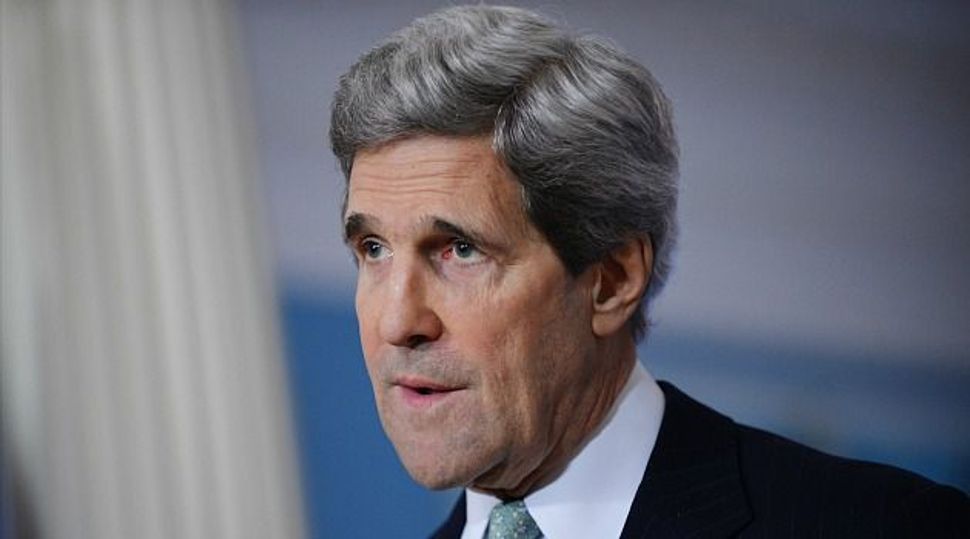 Across the Board: Secretary of State John Kerry said sequestration cuts would slash aid to Israel, and defended foreign aid as an effective use of U.S. resources. Image by getty images

Sequestration could lead to cuts in military assistance to Israel, Jordan and Egypt, Secretary of State John Kerry told Congress.

“Under sequestration, our security assistance accounts would face an approximately $500 million reduction, undermining our efforts around the world to prevent conflict and protect our national security,” Kerry wrote in a Feb. 11 letter to Sen. Barbara Mikulski (D-Md.), the chairwoman of the Senate Appropriations Committee. “An over $300 million cut to our Foreign Military Financing account could lead to reductions in military assistance to Israel, Jordan and Egypt, undermining our commitment to their security at such a volatile time.”

Sequestration, which kicks in March 1, refers to congressionally mandated across the board cuts of about 8.5 percent, designed as an incentive to get Congress and the White House to agree on a budget.

However, an impasse between Obama and his Democratic allies in the Senate and the Republican-led U.S. House of Representatives means that the deadline is likely to pass without an agreement. It is not clear which cuts would come first.

Jordan and Egypt receive military assistance as part of their peace agreements with Israel.

The Obama administration has defended maintaining the assistance to Egypt, noting that it continues to abide by the peace treaty despite its new Israel-hostile Islamist government.

Speaking ahead of across-the-board U.S. budget reductions set to begin on March 1, Kerry argued that the slightly more than 1 percent of the federal budget that Washington spends on foreign affairs pays dividends in national security and growth.

“Foreign assistance is not a giveaway. It’s not charity. It is an investment in a strong America and in a free world,” Kerry said at the University of Virginia, which was founded by Thomas Jefferson, the first U.S. secretary of state.

He said the vacuum left by U.S. retreat from the world could foster failed states that become bases for attacks on the United States, whereas foreign aid can help other nations become customers for U.S. goods and sympathetic to American values.

“Deploying diplomats today is much cheaper than deploying troops tomorrow,” he added the Charlottesville, Virginia, speech, his first major address since replacing Hillary Clinton as secretary of state on Feb. 1.

Kerry, who leaves Sunday on a nine-nation trip to Western Europe and the Middle East, did not discuss in detail his approach to thorny issues such as the Iranian and North Korean nuclear programs, the Israeli-Palestinian dispute and Syria’s civil war.

His trip, from Sunday through March 6, will take him to London, Berlin, Paris, Rome, Ankara, Cairo, Riyadh, Abu Dhabi and Doha.

Instead, he focused on the possibility of the automatic spending cuts, known in Washington jargon as “sequestration,” that may kick in on March 1, as well as a general defense of U.S. engagement in the world.

Sequestration would slice $2.6 billion from the budget for the State Department and the U.S. development aid agency, Kerry said last week, arguing this would undercut U.S. diplomacy and security at a time of turmoil across the Middle East and Africa.

“When a shrinking world clashes with calls for shrinking budgets … it’s our job to connect those dots … for the American people between what we do over there and the size of the difference that it makes over here at home,” he said.

“Why the price of abandoning our global efforts would be exorbitant, and why the vacuum we would leave by retreating within ourselves will quickly be filled by those whose interests differ dramatically from ours,” he added.