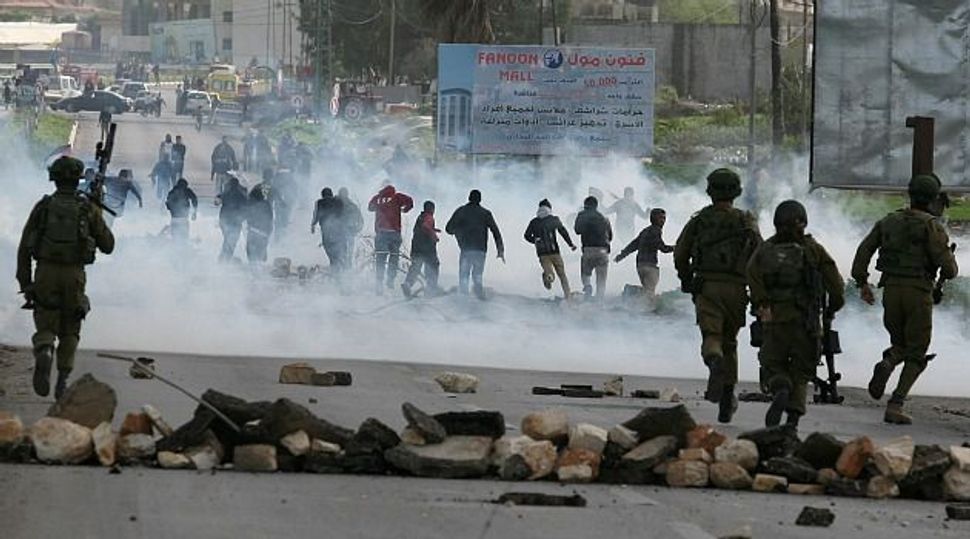 Masked Palestinian gunmen fired in the air on Monday as thousands marched at the West Bank funeral of a prisoner whose death in an Israeli jail has raised fears in Israel of a new uprising.

Arafat Jaradat’s death on Saturday and a hunger strike by four other Palestinian inmates have raised tension in the occupied territory after repeated clashes between stone-throwers and Israeli soldiers in recent days.

Israeli troops, on high alert, took up positions outside Jaradat’s home village of Se’eer, in likely earshot of the bursts of automatic fire from the half-dozen masked Palestinians in full battle dress.

“We sacrifice our souls and blood for you, our martyr!” mourners chanted.

The sounds and fury were reminiscent of the seven-year Intifada, or uprising, that started in 2000 after Israeli-Palestinian peace talks failed.

The Israeli military said dozens of Palestinians had thrown stones at soldiers in various parts of the West Bank on Monday. Troops responded with tear gas and stun grenades, and no serious injuries were reported.

“The previous two Intifadas … came about as a result of a high number of dead (during protests),” Dichter told Israel Radio. “Fatalities are almost a proven recipe for a sharper escalation.”

Jaradat, 30, was arrested a week ago for throwing stones at Israeli cars in the West Bank.

Palestinian officials said he had died after being tortured in prison. But Israel said an autopsy carried out in the presence of a Palestinian coroner was inconclusive and that injuries such as broken ribs could have been caused by efforts to revive Jaradat.

Palestinian frustration has been fuelled by Israel’s settlement expansion in the West Bank, a peace process in limbo since 2010 and a persisting rift between President Mahmoud Abbas’s Palestinian Authority and the Islamists of Hamas who run Gaza.

“We have no choice but to continue the popular resistance and escalate it in the face of the occupation, whether it be the army or the settlers,” Mahmoud Aloul, a senior member of Abbas’s Fatah movement, told Reuters.

In Se’eer, local merchant Abu Issa, 45, said he was unsure whether what he described as Palestinian opposition to Israeli occupation would lead to an uprising.

“One day the Palestinian people will take a stand, but I don’t know if that day is today,” he said.

Abbas has said he will not allow a third armed Intifada.

“The Israelis want chaos … We will not allow them to drag us into it and to mess with the lives of our children and our youth,” Abbas told reporters in his office in the West Bank town of Ramallah.

Dichter said Israel had to tread carefully in dealing with protests, accusing the Palestinians of trying to portray themselves as victims before U.S. President Barack Obama’s visit to the region next month.

“I don’t think the Palestinian Authority will gain from an intifada, just as it didn’t achieve anything from the first or second intifadas,” he said.

“But I would say that, after conducting themselves with poor and warped thinking over the years, they don’t always recognise what’s in their best interests.”

Israel demanded on Sunday that the Palestinian Authority stem the protests, many of which have taken place in areas outside the Authority’s jurisdiction.

“They (the Palestinians) are trying to drag us to a situation where there will be dead children,” Dichter said.

Palestinians have rallied to the cause of the four hunger-strikers, two of whom are being held without trial on suspicion of anti-Israeli activity.

Some 4,700 Palestinians are in Israeli jails and Palestinians see them as heroes in a struggle for statehood.

The death of any of the hunger-strikers, one of whom has been refusing food, off and on, for more than 200 days, would likely lead to more widespread violence.

The second Intifada broke out in 2000 after the failure of talks on a final peace agreement. Over the following seven years, more than 1,000 Israelis died, half of them in suicide attacks mostly against civilians. More than 4,500 Palestinians were killed by Israeli forces.