Obama Plans To ‘Listen’ During Visit to Israel and Palestinian Territories 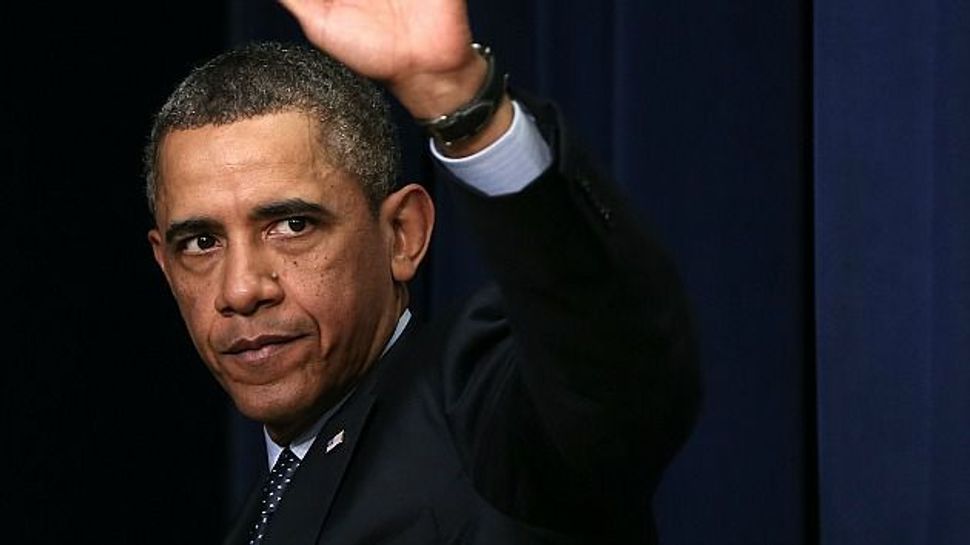 Listening Tour: Barack Obama will be listening to both sides during his upcoming Mideast visit. So says new Secretary of State John Kerry. Image by getty images

President Barack Obama will not bring a peace plan to Israel and the Palestinian Territories next month, but rather intends to listen, Secretary of State John Kerry said on Tuesday.

Obama’s plan to visit has raised speculation of a new U.S. push to revive Israeli-Palestinian negotiations, stalled since 2010 in a dispute over Israeli settlement expansion in the occupied West Bank.

But Kerry, speaking to German students during his first foreign trip as Washington’s top diplomat, played down expectations.

“We’re not going to go and sort of plunk a plan down and tell everybody what they have to do,” Kerry said. “I want to consult and the president wants to listen.”

Obama, who has a testy relationship with right-wing Israeli Prime Minister Benjamin Netanyahu, made peace between Israelis and Palestinians a priority in his first term but, four years later, has little to show for it.

In recent months, each side has antagonised the other – Israel by building Jewish settlements on occupied land and the Palestinians by seeking enhanced status at the United Nations.

Kerry said that after Obama’s trip, which also includes a stop in Jordan, the United States would see how it might pursue peace. He urged all sides to behave calmly and keep the possibility of peace alive.

Tensions have risen in the West Bank, territory that the Palestinians want to be part of a future state including the Gaza Strip and East Jerusalem, after the death of a Palestinian in an Israeli jail on Saturday in contested circumstances.

A hunger strike by four other Palestinian prisoners has also fuelled violent protests.

STEP BACK A LITTLE

“We really hope everybody will step back a little and try to find a way to proceed very calmly and very thoughtfully in these next days (and) leave the opportunities for peaceful resolution open,” Kerry said.

In an apparent show of solidarity with Palestinians protesting in the West Bank, militants in the Gaza Strip fired a rocket into Israel on Tuesday for the first time since a truce ended a week of cross-border fighting in November.

There were no casualties in the strike, which the Palestinian news agency Ma’an said had been claimed by al-Aqsa Martyrs’ Brigades, an armed group in President Mahmoud Abbas’s West Bank-based Fatah movement.

Hamas, the Islamist group that has governed the Gaza Strip since wresting control of the territory from Fatah in 2007, said it was investigating the incident. There was no immediate Israeli military response.

Netanyahu has said he hopes Abbas will return to peace talks, but has made clear he intends to put Iran’s nuclear programme at the top of the agenda of his meetings with Obama, who has drawn criticism in Israel for not visiting during his first term.

Israel, widely believed to be the Middle East’s only nuclear power, and the West fear Iran’s enrichment of uranium is aimed at developing atomic weapons.

World powers, holding their first meeting with Iran in eight months, were expected to offer limited sanctions relief in talks on Tuesday in the Kazakh city of Almaty if Iran agreed to halt its most sensitive nuclear work.

Obama Plans To ‘Listen’ During Visit to Israel and Palestinian Territories