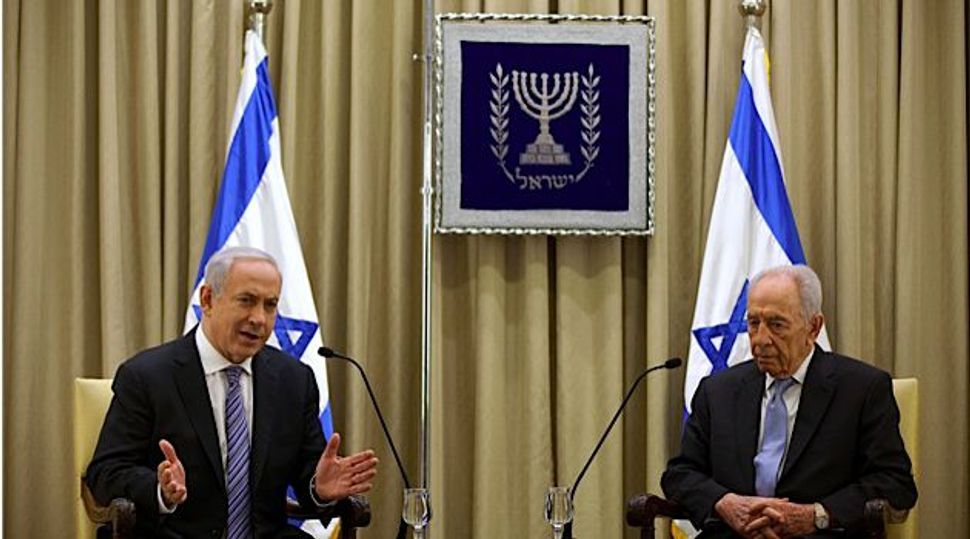 Israeli President Shimon Peres on Saturday gave Prime Minister Benjamin Netanyahu an additional 14 days to try to form a new government after he was unable to complete the task during an initial 28-day period.

Talks with potential partners have been deadlocked since elections on Jan. 22 and if he is unable to form a government by March 16 a new poll could be called – a delay that also puts into question a planned visit by U.S. President Barack Obama.

Netanyahu’s Likud-Beitenu won 31 of the Knesset’s 120 seats – an eroded lead that forced him to cast a wide net for partners while juggling their disparate demands.

During the 28-day period, Netanyahu managed to forge a pact only with the party of former foreign minister, Tzipi Livni, whose six-member faction “The Movement” has given him 37 seats, way short of the minimum 61 needed to confirm a new coalition.

In a brief statement following his meeting with Peres on Saturday night, Netanyahu hinted that at least one potential coalition partner refused to sit alongside others.

Netanyahu has faced demands from the parties that placed second and fourth, Yesh Atid (There is a Future) and Bayit Yehudi (Jewish Home), to slash mass exemptions from military conscription and cut welfare stipends to ultra-Orthodox Jews.

In coalition talks on Friday with Bayit Yehudi, Netanyahu’s chief negotiator said the right-wing party was unwilling to sit alongside ultra-Orthodox parties but Bayit Yehudi officials denied this.

Although he did not name Bayit Yehudi or Yesh Atid as the reason for his inability to form a coalition, Netanyahu said some parties were boycotting others.

“In these past four weeks I tried to form the broadest possible government … I think the ultra-Orthodox public is prepared to accept (demands by other partners) but the main reason that I have not managed to complete the task by today is … because there is a boycott of a certain sector,” he said.

Netanyahu’s outgoing coalition includes two ultra-Orthodox parties which have generally backed him on policies such the settlement of occupied West Bank land in defiance of world powers who support the Palestinians’ drive for statehood there.

Bayit Yehudi is even less accommodating of the Palestinians than Netanyahu, who says he wants to revive stalled peace talks.

Should Netanyahu fail to co-opt allies for a parliamentary majority by March 16, Peres could hand the coalition-building task to another lawmaker and if after an additional period no government emerges, Israelis would have to return to the polls.

Netanyahu was backed by 82 of parliament’s 120 lawmakers to form the next government so Peres, whose only real executive power is to nominate a Knesset member to form a government, may opt not to pick another candidate and elections would be called.

Obama is due to visit Israel at the end of March and Netanyahu’s trouble in building a new government raises the question of whether he may call off that visit.

But when asked about Israeli reports he might cancel, an official in Washington, speaking on condition of anonymity, said there was no talk at this point about the possibility of Obama scrubbing the trip.