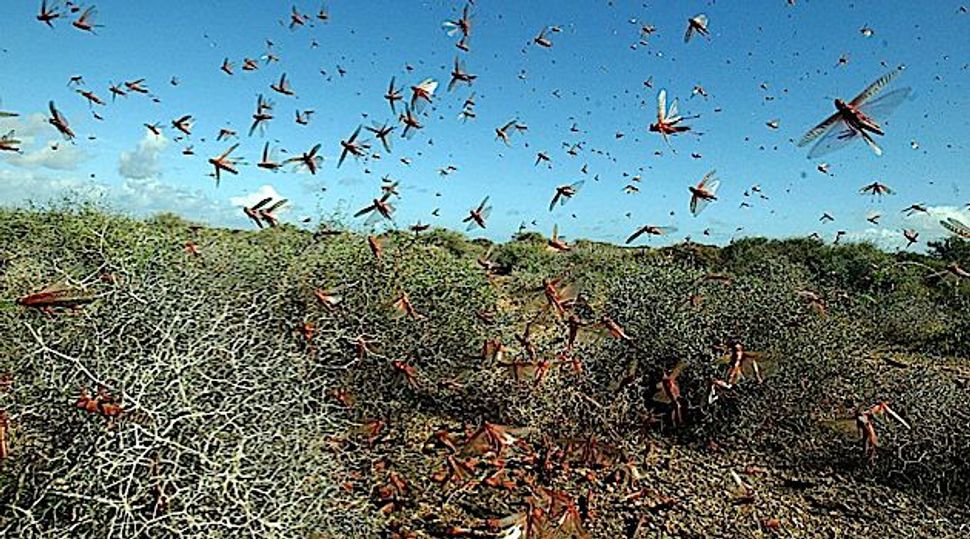 Locusts swarmed Spain in 2004, much like they are plaguing the Middle East now on the eve of the Passover season. Image by Getty Images

The Agriculture Ministry said that steps would be taken to exterminate the insects overnight, before they could spread to other districts.

Relatively small swarms of locusts began descended on northern Egypt in recent days and were carried into Israel by Westerly winds. The Agriculture Ministry set up a hotline a few days ago where people could report locust sightings.

“All the relevant parties in the areas that locusts can be expected to enter have been briefed and are on alert,” said Miriam Freund, director of the ministry’s Plant Protection and Inspection Services. “Israel has an aerial and land-based spraying system that is ready for action if and when it is needed. We are in regular contact with the United Nations World Food Programme, which is giving us reports on the advance of the locust swarms.”

As part of its preparations, the ministry asked companies that make or import pesticides to increase their inventories.

*Read the full story on Haaretz.com; use promo code Forward for 25% off your digital subscription.