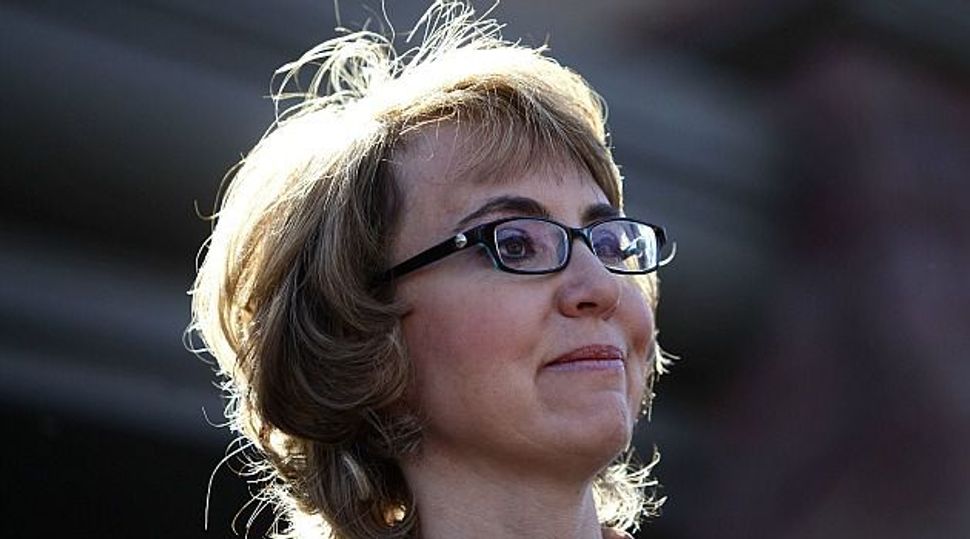 Homecoming: Ex-Rep. Gabby Giffords called for new gun laws in an emotional return to the spot where she was nearly killed in a shooting rampage. Image by getty images

Standing just a few feet from where a gunman more than two years ago put a bullet through Giffords’ head and then opened fire on constituents, Giffords and husband Mark Kelly urged Arizona Senators John McCain and Jeff Flake, both Republicans, to support a universal background check system.

“Be bold. Be courageous. Be for background checks,” said Giffords, who is a Democrat. The shooting left her with speech difficulties, a pronounced limp and a partially paralyzed right arm, which she cradled in her left as she spoke. Six people were killed and 13 others wounded in the attack.

Flanked by other victims and family members of several people slain in the shooting, Giffords and Kelly urged U.S. lawmakers and voters to get behind a bill in Congress that would require background checks for all gun transfers or purchases.

About 100 people attended the event, including media, Giffords’ entourage and passers-by. It was Giffords’ first public appearance at the suburban Safeway grocery store where college dropout Jared Loughner opened fire at her congressional outreach meeting on Jan. 8, 2011. She and Kelly, a former astronaut, visited the scene unannounced a year after the shooting.

Giffords resigned from Congress a year after the shooting to focus on her recovery.

In the wake of an assault-rifle attack that left 26 people – including 20 elementary school children – dead at a Newtown, Connecticut, school in December, Giffords and Kelly founded a new group aimed at curbing gun violence and challenging the political clout of the well-funded gun lobby.

The group, Americans for Responsible Solutions, urges actions including a ban on assault weapons and high-capacity magazines and seeks to raise $20 million for the 2014 congressional elections, matching the National Rifle Association’s spending in last November’s election.

Emily Nottingham, whose son, Gabe Zimmerman, was killed the day of Giffords’ shooting, choked up when she talked about the need for tighter controls. The current system of background checks lets too many people with mental illness or criminal pasts slip through, Nottingham said.

“That system is riddled with holes. Bullet holes,” she said.

Giffords and Kelly are both gun owners and strong supporters of the Second Amendment of the U.S. Constitution, which guarantees Americans’ right to own guns. Kelly said the drive was focused on public safety, and closing loopholes that allow unchecked Internet and gun-show purchases would save lives.

More than 1.7 million people have failed gun store background checks since they have been required, Kelly said, and he wondered how many then went to gun shows to buy weapons.

“I suspect there were plenty,” Kelly said. “How many violent crimes, how many senseless deaths could have been prevented?”

Last November, Loughner was sentenced to life in prison. He received seven consecutive life terms plus 140 years in prison, without the possibility of parole, under a deal with prosecutors that spared him the death penalty.